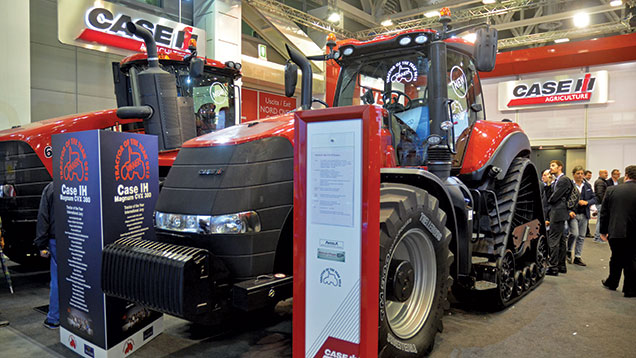 The Eima show runs every other year and is the best place to see farm machinery in Italy. Martin Rickatson trawled the halls for the newest and the wackiest tractors on the market.

Eima marked the European public debut of the Rowtrac option for Case IH’s revised Magnum tractor range. Already on the market in North America, the Rowtrac models feature tracked drive units in place of wheels on the rear axle. In the USA and Canada, track widths of 16, 18, 24 and 30in are available. The Rowtrac option is available on the top two models in the Magnum range, the 340 and 380.

Claas announced a little more than a year ago it was in discussions with Same Deutz-Fahr to work together on the development, production and supply of tractors in the 70-110hp power band, and the first fruits of this were revealed at Eima. The Atos range is built at the SDF factory in Treviglio, Italy, and for now will be offered alongside the existing Axos models which Claas offers in this sector. There is a trio of three-cylinder models – the 76hp 220, 88hp 230 and 97hp 240 – and a further three four-cylinder tractors, comprising the 88hp 330, 102hp 340 and 109hp 350.

Reverse-drive tractors have never been big sellers in the UK, with just a handful of models from the likes of Valtra and Fendt sold each year. However, Italian maker BM Tractors continues to offer a range of dedicated reverse-drive machines and has launched a flagship for its range, the Better 180. It features a 188hp FPT six-cylinder engine, hydrostatic transmission and four-wheel steering. Tyre sizes, though, are relatively small – either 400/70 R20, 405/70 R20 or 420/65 R20 in ag spec.

Zoomlion is among China’s largest construction equipment companies, and its farm machinery division was founded in August this year following a merger with fellow Chinese firm Chery. Zoomlion produces 10 series of wheeled tractors, with this RS1204 its smallest six-cylinder model, at 118hp. Its top-flight RA series extends to 210hp, courtesy of a Chinese-made engine using Deutz technology, or a Perkins option. The firm also makes a wide range of harvesters for cereals, rice and maize, and a full line of implements.

Through its acquisition of fellow Italian firm Unigreen, Maschio now has a full sprayer line, including self-propelled models such as this high-clearance Talpa AD digestate applicator. Powered by a choice of 250hp six-cyl engines from either John Deere, FPT or Deutz, drive is provided to all six wheels by Bosch Rexroth hydrostatic wheel motors. The frame is articulated behind the front axle, aided by rear axle steering, and ground clearance is 1.65m. A six or eight row injector is supplied by a 12,000-litre tank.

If you’ve long been looking to replace your old Caterpillar D6 or Track Marshall 155 as your heavy cultivations mainstay, and aren’t keen to switch to rubber, Italian firm Scaip may have the answer. Its new range of Warrior steel-tracked crawlers comprises four models of 150, 200, 350 and 350hp, all powered by FPT/Iveco engines. Transmission is hydrostatic, with two ranges offering speeds from 0-7 and 0-12km/hr. Rear lift capacity on the top two models is 12t, and on the others 8.5t.