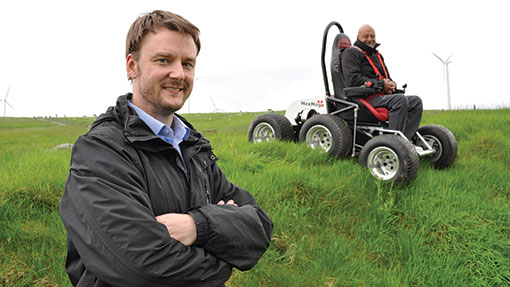 An electrically powered six-wheel-drive ATV that allows wheelchair users to get actively involved in the countryside has been developed by a farmer’s son from north Wales. Simon Wragg explains.

There are plenty of ATVs on the market but you won’t have seen anything like this. Sion Pierce, a mechanical engineer from Nantglyn, near Denbigh, describes his HexHog as a “quad bike on the outside and wheelchair on the inside”.

Powered by lithium-ion rechargeable batteries, the vehicle has joystick control, weighs just 275kg and has a range of 8-12 miles, depending on terrain. That allows it to tackle conditions that able-bodied persons would find arduous.

Launched at the Naidex Show at the NEC, HexHog uses two 36v motors to provide independent drive to all six 20×10-10 wheels via low maintenance gearboxes and driveshafts.

The machine was conceived as part of Mr Pierce’s degree in mechanical engineering at Harper Adams. “I was inspired having read of a former student’s brother who felt left out when everyone was helping on the farm due to limitations of his wheelchair,” says Mr Pierce.

Centipede-like grip is achieved by mounting wheels each side of the chassis from a pivot (situated between the second and third wheel) from which front and rear wheels float on trailing arms.

“HexHog easily copes with 50% slopes. The operator remains comfortably upright over terrain as the seat adjusts with the position of each axle via a series of linkages. Forward speed is governed to 8.5mph but can be altered.”

The demonstrator we tested was smaller than the on-line video suggested at roughly 1.8m x 1.2m (5ft 9in x 4ft). It’s fitted with an optional electric retractable seat allowing side-by-side transfer from a wheelchair and a rally-type bucket seat and four-point harness keeps the operator secure.

Paddle switches on the armrest alter the seat ride height, allowing you to place your feet comfortably on the aluminium chequerplate floor. A car key sends power to the motors and the HexHog is “driven” with a right hand-mounted joystick.

Pushing the joystick forward releases the brakes in the 36v motors before moving off. “It’s one of the beauties of the system; if you aren’t happy at any time crossing terrain you just let go of the joystick and HexHog comes to a halt.”

The sensitivity of the joystick control can be adapted to suit individual users. On all surfaces HexHog can easily leave able-bodied persons behind but especially where ground conditions are damp, wet, slippery or undulating under foot.

According to wheelchair user Vincent Ross (pictured), whose company will assist in the HexHog’s manufacture, it’s a major step forward. “You feel in control all the time. There’s no sudden sensation of tipping forward or pitching as it moves over the ground. Once you’re used to it you get a strange feeling of security,” he explained.

Range is up to 12 miles, with a display on the left-hand armrest showing battery life. A recharge from a normal 13A socket takes a little over two hours. 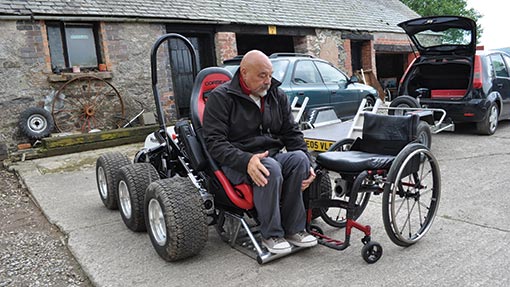 It’s made from off-the-shelf components, so most vehicle electrical engineers would be able to maintain it.

It’s also nil rated for VAT, can be driven on the highway on a car licence (it has ATV-style road lights) and can be transported on a lightweight single axle trailer without the need to take a statutory trailer test. A remote control unit for unloading is available.

It’s taken well over a year of development – aided by an investment from an off-road vehicle component manufacturer Safety Devices to get HexHog to production, explained Mr Pierce. “If it gives wheelchair users a chance to be involved in the countryside then I’ve achieved my objective.”

Prices start from £18,000. “On and off road mobility scooters cost around £12,000-20,000 and many are severely limited once outside the urban environment,” explained Mr Pierce, who will manufacture the HexHog with adaptive equipment company Da Vinci Mobility of Liverpool. You can find our more about the kit on the HexHog website.