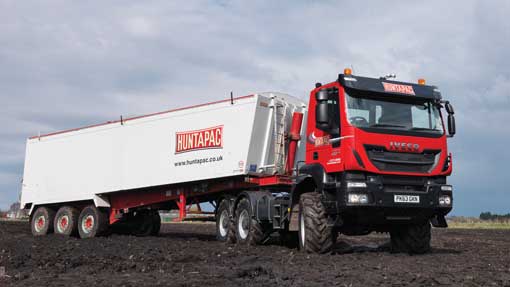 Hauling harvested crops from field to farm can be a logistical nightmare. Will Shiers from Commercial Motor meets one carrot farmer who has replaced tractors with trucks

If you were to lay out all the carrots grown in the UK in one year end to end, they would stretch for two million kilometres.

That is, coincidentally, the same distance that Lancashire-based veg-and-salad producer Huntapac’s fleet of 10 Iveco Stralis trucks cover in a year.

Huntapac also runs 50 Scanias, which together with the Ivecos are responsible for carrying carrots and parsnips from the fields to its Lancashire processing plant and then on to the UK’s supermarkets.

The firm delivers 200 pallets of carrots and parsnips daily, which increases to 800-a-day in mid-December ready for the Christmas rush.

The company has traditionally used tractors attached to powered dollies and tipping trailers to collect the carrot crop from the harvester. When full, the tractors pull the semi-trailers to nearby hard-standing, where they are taken away by two-wheel drive trucks.

The first advantage was better traction. The powered dolly currently used by Huntapac has a propshaft connected to the tractor’s PTO.

“As you go through the fields it sort of gives you six-wheel-drive,” explains Mr Bell. “But obviously with it working on the PTO there’s no drive ratio, so you end up churning fields.”

A six-wheel drive machine would also have safety benefits, but the biggest operational advantage would come from improved payloads.

At the beginning of the growing season the pulled carrots are pretty clean, so trailers can be loaded without any worries about exceeding the load limits. But, with Huntapac harvesting year-round, autumn- and winter-pulled carrots bring up lumps of soil and stones, and it’s not unusual for a truck to return with a gross weight of just 34t, according to Mr Bell. Speccing a 6×6 truck with hydraulic lifting gear and on-board weighing equipment would guarantee a maximum payload for every journey.

Although the Iveco Trakker isn’t offered in the UK as a 6×6 tractor unit, a rigid version is available. The decision was made to convert a pair of Cursor 13-powered, 450hp 6×6 rigid-bodied Trakkers into tractor units, a job that was carried out by Darwen-based Wheelbase Engineering.

The project has taken more than a year from start to finish, which was due to the combination of a lengthy planning/build process and an abundance of Vosa red tape.

The main reason for the delay was down to the truck’s tyres. The original rubber they were shod with was rated to 45mph, which he assumed would be ideal because they were limited to 40mph anyway. But Vosa had other ideas and insisted that the tyres be capable of doing 56mph. They finally found a suitable 495/70 R 24 boot for £850-a-piece from Israeli tyre maker Alliance.

“It doesn’t make much sense,” complains Mr Bell. “The longest distance they would ever travel on public roads would be half a mile when moving from carrot to parsnip fields and if we were moving them from one part of the country to another then they would go by low-loader.”

The trucks will also be downgraded to agricultural vehicles to allow them to run on red diesel and Mr Bell believes the 6×6 concept could prove popular with wheat farmers struggling to keep up with high combine outputs.