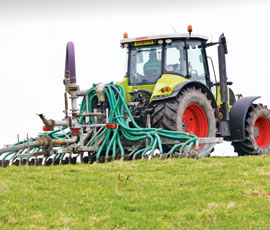 At a time when slurry is being recognised as a valuable source of fertiliser, the industry is now increasingly aware of how and when it should be spread, it seems.

According to Mark Dutton, the days of simply dumping the contents of a lagoon onto the nearest field with scant regard for how or when it is spread, are now long passed.

“Today, farmers need to know and have records to show how it is spread, how much is applied and the plant nutrition it is providing,” he says.

Mr Dutton runs his slurry spreading business in partnership with his cousin Richard Dutton. Together they offer both a tanker spreading service and an umbilical system for dairy farmers within a 35-mile radius of Chester.

This applicator delivers slurry directly onto the surface of the field from a series of outlets spaced at 15cm across a 6m working width.

“In an ideal world we would always use umbilical spreading,” says Mark. “Using this system we can spread continuously and, as a result, achieve greater outputs than if we were having to use tankers. There are also ground compaction issues when running around fields with heavy tankers – even if they are fitted with flotation tyres.”

Umbilical spreading does have its limitations though, not least is the fact that fields need to be within a reasonable distance of the lagoon from which the slurry is being pumped.

The further it has to be pumped, the slower the slurry flows, a situation that can be improved by placing in-line pumps to boost the flow.

“We tend to limit our distances to about 2,000m which is just about on the limit for one pump,” he says. “There are those contractors who will pump it greater distances and even build gantries to get pipes across roads but the real point is that at over 2,000m output drops to a level that we can exceed by using our tankers.”

The other point to bear in mind is that umbilical piping costs about £9/m and usually needs to be replaced every four or five years.

“When distances become too great we use our tankers – two Major 30,000 litre units,” he says. “Some farmers looking to apply slurry to more distant fields are now building lagoons in strategic places around their farms. With slurry pumped or transported to them during the winter months, it is possible to use the umbilical system when it comes to spreading time.” 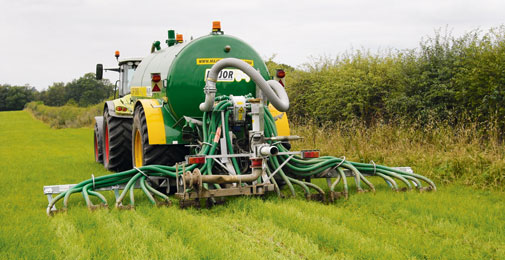 One of the banes for all involved in umbilical spreading is trying to spread slurry that is too thick and viscous so that its movement along the pipes is slow and output is restricted. Flow rate governs the speed of the tractor working in the field with the applicator.

“We always spend time agitating a lagoon to get an even consistency, but if it is too thick to pump effectively we have to add water to dilute it,” he explains. “This can be annoying and a real non-earner as we pump in large quantities of water which we then have to pump back out through the umbilical.”

Once again, the alternative is to use the tanker, which can cope more readily with thicker slurry.

Umbilical spreading is also a two-man job – one to look after the pump and the other to drive the spreader. There are radio-controlled systems for pumps that allow the operator on the spreading tractor to shut down the pump or start it running again, but few contractors appear to consider such devices to be a sensible option.

“There is too much at risk,” says Mark. “It’s not just looking after the pump, it’s also keeping an eye on the tractor powering it. Having said that, it can be one of the most boring jobs – and sitting on the tractor for long hours spreading at 5kph is only marginally better.”

The point, though, is if either Mark or Richard are away, spreading can continue with a tanker and it’s also worth commenting at this stage that the tankers are usually used to spread slurry in smaller fields where the time taken to set up the hoses for umbilical spreading cannot be justified.

Out in the field, the Duttons use a Claas Arion 640 tractor with the applicator, which is attached to the hose. Application rate is 40,000-50,000 litres/ha.

“We have a flow meter on the pump, so we know at what rate the slurry is being delivered and we can adjust the tractor speed to apply a required volume per acre,” he explains.

“When the job is completed, we can then provide the customer with a record of how much slurry has been applied, which he can then use to calculate how much extra fertiliser he wants to apply.”

At the end of the day, or when a field is completed, the hose has to be rewound onto a spool attached to the front of the tractor. But before that and to prevent any build up of flow-impeding, dried slurry on the inside walls of the pipe, a plastic sponge is blown through the pipe using air generated by a compressor.

At £6 each, the challenge is to prevent the sponge entering the macerator when it arrives at the applicator.

In freezing conditions pipes and pumps need to be drained and well protected. And some contractors keep pumping all night to prevent freeze ups and avoid the tedious task of thawing everything out the next morning. “Tankers are not entirely immune to frost problems either, but they are certainly not as troublesome as umbilical piping,” insists Mark.

In terms of fuel consumption, umbilical spreading has two tractors on the run – the one driving the pump delivering more than 100,000 litres/hour uses about 14 litres/hour, while the Claas 640 in the field is not exactly stressed and just tickles along with the engine almost at idle and uses about 6 litres/hour. When the agitator is in use, the tractor powering it uses a further 6 litres/hour so the total amount of fuel used is in the region of 26 litres an hour.

A tractor pulling a tanker would clearly use less fuel, but its output would also be significantly reduced.

“There’s clearly a case for tankers and also for umbilical spreading systems,” says Mark. “As we have indicated, the umbilical is probably the best way of applying slurry, but it is a system that has its limitations. It’s also worth noting that, as dairy herds become bigger, the volume of slurry increases and requires a larger area of land for it to be spread which, in itself, could mean that tankers will have a greater part to play in the future.”