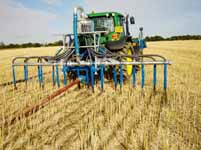 There has probably never been a time when having adequate slurry store capacity was more important. Dairy herds are becoming larger, NVZ regulations are curtailing application periods and there’s now a mass of regulations surrounding the use and storage of slurry.

According to DEFRA, the UK dairy cow population amounts to about 1.9 million head, shared between just over 16,000 producers. That means the average herd size is now about 115 animals and rising (though there are big regional variations), and each farm has an ever greater volume of slurry to contend with.

NVZ regulations, which affect 70% of dairy farms in England and to a lesser extent farmers in Scotland and Wales, require sufficient storage to be available to hold five months’ slurry production (six months for pigs) – including all washing water and rainfall – to cover the closed spreading period. For many dairy farmers it will inevitably mean they have to increase their slurry storage capacity.

There’s also an increasing realisation that slurry also has a value. Some sources put the value of slurry produced at almost £80 a cow a year when its nutrient content is compared with the cost of bought-in inorganic fertilisers.

Farmers are also taking a more structured approach to its use. Rather than spreading slurry on the closest piece of land to the store, many are applying a dressing across the whole farm which may be some distance away.

For many, that has meant constructing slurry stores at strategic places on the farm to allow land to be spread more easily without a lot of long-distance haulage being involved.

What sort of store and how big?

According to Nigel Penlington, environmental programme manager at BPEX, a division of the Agricultural and Horticulture Development Board, the starting point for farmers doesn’t necessarily revolve around size or store type. Instead it’s more about the type of slurry being stored and how it is to be spread.

“If you’re using tankers the store needs good access to allow them to be filled,” he says. “If it is to be pumped out and spread using an umbilical system then distance from the fields clearly is.”

Slurry viscosity is also a consideration since umbilical systems prefer a less viscous product than tanker-based ones. Then there’s the issue of whether or not you should include a separation system to take out the solids. This can reduce volumes significantly and thereby cut the required storage capacity.

“It would be useful to also know just what sort of volumes of slurry there are likely to be and make adequate provision for any planned increase in herd numbers,” he says.

DairyCo is one of a number of organisations which provide a slurry calculator, in this case the Slurry Wizard. Primed with data that includes cow numbers, washings, rainfall, yard areas, existing storage capacity and how much land you have to spread it, it provides a suggested slurry store size.

Do I need planning permission?

All new slurry stores need some form of approval, says Mr Penlington. Farmers should also talk to the Environment Agency who can not only advise on the suitability of a proposed site but also provide help when it comes to complying with legal requirements.

“To go ahead and spend out on a store which is later deemed to be illegal for one reason or another is shear folly,” he says. “It’s so much better to get the Environment Agency on side from day one.”

In any event, after the store is completed and at least 14 days before it is first used, the Environment Agency needs to be notified in writing so that the store can be inspected and signed off. It is an offence to fail to adhere to this requirement.

What about safety considerations?

By their very nature, slurry stores are dangerous – they tend to be deep with vertical sides and contain viscous liquid. To have the misfortune to fall in one is more than likely to result in an unpleasant and terminal outcome.

It follows then that such stores should:

Slurry can also produce poisonous gases, particularly when being agitated. Confined spaces, or a store with a lid on, should never be entered unless it is absolutely necessary and only then by trained personnel equipped with the correct equipment.

What types of store are there?

One of the least expensive storage systems, but not an option for every farmer. The soil needs to be impermeable and stable and extend to a depth of at least 1m below the base of the store.

Typically, says the Environment Agency, soils with a clay content of between 20-30% are ideal. A lower clay content may cause leakage and a higher clay content will be unstable and may crack on drying.

If you haven’t got the right soil, you can import some or else use a synthetic liner – but both will add significantly to the costs.

Avoid a site that floods or has a high water table. It is also mandatory to ensure it is no closer than 10m to any waterways. That includes land drains which need to be removed and their channels back-filled with impermeable material.

Earth bank lagoons must be designed so that, even when full, there should be a gap of at least 750mm below the top of the lagoon.

While earth bank lagoons may be reasonably cheap, they do have their limitations when it comes to providing any form of cover. There are fixed floating membranes which can be spread across the lagoon and fixed to the banks but these are expensive and need to have rainwater pumped off them. Moreover access for de-sludging can be difficult.

Without a cover, rainwater enthusiastically joins the stored slurry. A circular lagoon 40m in diameter on the receiving end 50cm of rainwater would see the volume of liquid go up by 600cu m or 600,000 litres (132,000gal).

* Could be used with sand bedding if there are emptying facilities.

Concrete is a tough building material which is unaffected by slurry, but needs to be reinforced with steel rods. Suppliers tend to pre-cast sections off site and assemble them where they need to be.

Moore Concrete Products is s typical supplier of such products. It offers stores with capacities that range from 31,500 to 4,500,000 litres. Capacity is achieved by a combination of different base diameters and wall heights of 4m, 5m or 6m.

Construction starts with 200mm of reinforced concrete on the base. This is left for at least eight days to allow the concrete to cure properly, then the pre-cast wall sections are assembled.

Steel tensioning cables (encased in a PVC sheath filled with grease) are threaded through the posts and surround the outside of the store. After the initial stressing of the cables, the ring beam is poured, the joints are packed with expansive mortar and the cables given a final stressing.

* Durable – can be backfilled

* Quick and easy to erect 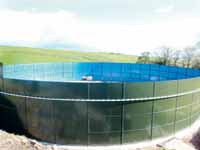 Though slurry is corrosive, steel tanks are treated with either a form of enamelling or a process which fuses a glass covering to the steel. Lancashire firm KellQuip, for example, supplies GalGlass steel storage tanks which use a fusion-bonded coating which is claimed to provide pinhole-free protection for the steel.

In many ways the construction is similar to a concrete store and the costs are similar. The base is created and the steel, supplied in panels, sealed and bolted together to form the walls. There is also a similar range of sizes available to meet the requirements of dairy and pig farms.

* Quick and easy to erect.

* Can be extended to increase capacity.

* Cannot be used for sand bedding

Increasingly popular in Europe, plastic storage bags for slurry offer advantages over the traditional concrete/steel store – once you have got used to the novelty of the idea.

Marketed in the UK by Tramspread, Netherlands-based Albers Alligator’s, PVC coated polyester bags can be placed in the field where the slurry is to be spread and filled with slurry from tankers.

Called the Winbag, it is available in capacities up to 300cu m and comes with three connection points and three vent tubes.

When empty the “bladder” as it is called, is simply rolled up using the appropriately designated bladder caddy – a hydraulically powered reeling system.

Tramspread also markets Albers Alligator 6000cu m permanent storage tanks. These can be sited in a suitably shaped hole in the ground, with a lining layer of sand and felt to provide protection.

They can be used for both separated and non-separated slurry and can be fitted with agitation systems. Expected lifespan is 20 years.

Both the portable and fixed tanks have covers and so are not troubled by rainwater. They can also be provided with agitators – two on the larger capacity versions.

Advantages: Winbag is portable, lower cost and easy to assemble.

Disadvantages: Strongly made but may still be vulnerable to damage.

In an ideal world, all slurry stores would have some form of covering – they prevent rainwater dilution, retain ammonia content and reduce smells.

Equipment choice comes down to cost. At one end is a complete lid – a rigid structure built to provide a permanent cover for the store.

At the other end are cheaper (but possibly less effective) floating expanded clay aggregates which do just that – float and provide a cover but do not prevent rainwater getting in.

In between are inflated roofs held up with air from an electric fan, floating plastic plates and so on – there is plenty of choice.

Before baulking at some of the prices, it is worth considering the extra work a metre of rain causes for, say, a 20m diameter store. One metre of rain will generate an extra 314,000 litres (69,000gal) which means several extra tanker loads, extra diesel consumption and higher labour costs as a result.