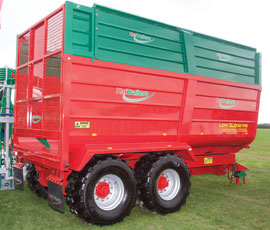 Northern Ireland contractor and manufacturer SlurryKat is well known for its bespoke slurry tankers and dribble bar/trailing shoe systems, but its trailer range was largely made for its own use and for neighbours. But it’s now putting a new range of trailers on general sale.

It has lightened the trailer by a tonne or so by changing the design to use strengthening ribs along the side panels, plus a curved bottom where it meets the chassis. A single, almost vertical, ram gives fast raising and lowering and also makes for a higher tip angle.