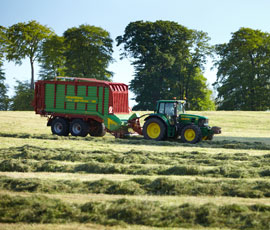 Farmers’ concerns about compaction are prompting contractors to fit bigger tyres. Nick Wilcox-Brown talked to one Somerset operator who’s taken the bull by the horns.

Compaction is a perennial issue, and nothing irritates landowners more than seeing their land compacted and chewed up after a wet silage season.

Alvis Contracting, from Redhill, North Somerset, has taken the lesson to heart. The bulk of its machinery is now fitted with oversized tyres, including Michelin CargoXbibs on their trailers.

Manager Daniel Harding explains: “We have traditionally fitted super singles on our trailers, but we trialled some CargoXbibs on our last batch of new trailers and they have really proved their worth. In wet maize, the tyres just float over the soil, whereas the lorry remoulds tend to dig in, causing rutting and soil compaction.”

The company has recently purchased 11 new Stewart trailers of varying sizes, all fitted with the tyres. Alvis’s tractors are also all equipped with air brakes, but trailers are fitted with both air and hydraulic brakes to accommodate tractors from outside the fleet. The ABS braking specified on the trailers prevents wheel lock-up and helps to improve tyre wear.

Grass is normally rowed up with a Claas Liner 4000 tedder working at 12.5m-15m widths and the movement of foragers and trailers across the ground is kept to a minimum. The forager, a Jaguar 940, is expected to cover 80ha (200 acres) a day and is also fitted with low ground pressure tyres.

Pit work is handled by a JCB 416S loading shovel. Normally three to four trailers are used for haulage, depending on the distance between the pit and the forager. If the journey distance is less, an extra machine can be put on the pit for rolling duties, with an added buckrake if required.

The team has one of the longest seasons in the UK, with each of the three foragers clocking about 1,200 hours each year. This has been achieved by adding a substantial amount of wholecrop and some miscanthus to the traditional grass and maize seasons.

Alvis also says that customers are increasingly asked for forage wagons. So two Strautmann wagons have joined the fleet, giving a far more efficient way of obtaining a longer 35-40mm chop length than the alternative of removing every other blade from forage harvesters.