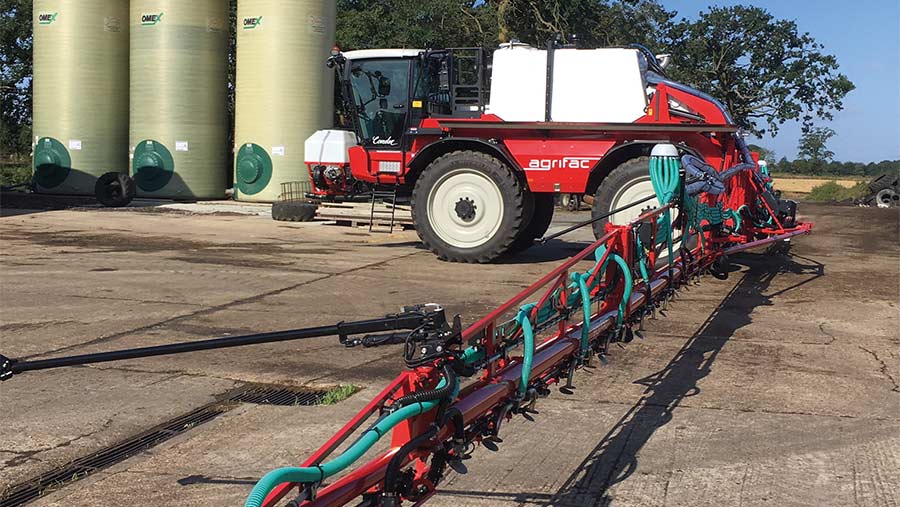 Steven Keal has been the sprayer operator at Thelveton Farms in Norfolk for four years and currently drives a highly-specced Agrifac Condor that has so far proved a sound investment, though it came at a cost.

The farm bought an Agrifac Condor last year to replace a 2014 Knight 1840. The main reason for the upgrade was to increase output and allow me to take on more liquid fertiliser work. The Knight had 24m booms and ran a 4,000-litre tank, so we didn’t have the capacity to increase the acreage.

My manager, Oliver Scott, really liked the Rogator and, as the farm is slowly switching tractor brand from New Holland to Fendt, it was the obvious choice.

But I’d had an Agrifac in my previous job and was seriously impressed by both the machine and the back-up, so convinced him to go for the Condor.

We had one on demo, which proved to us how good the boom is. It also had luxuries such as pulse-width modulation (PWM). 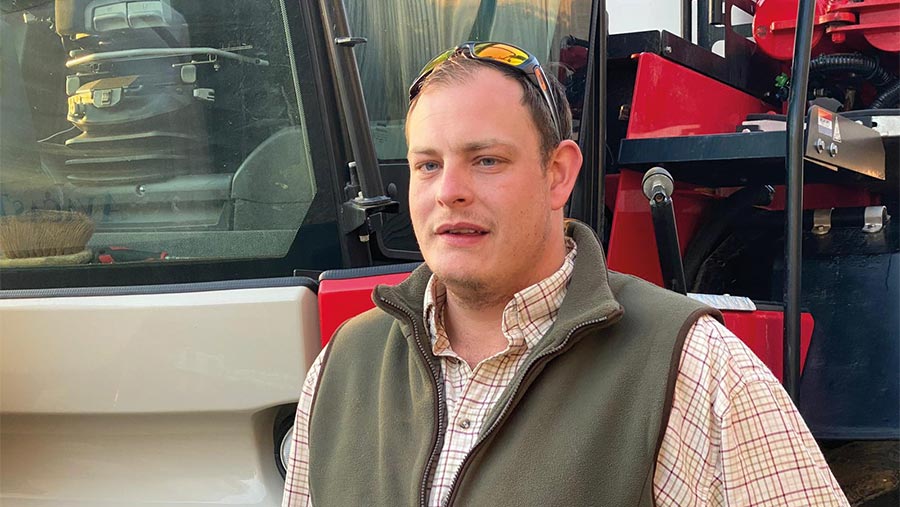 Agrifacs aren’t cheap, so we had resale values in mind when speccing it up. In particular, we were concerned the paintwork would be easily marked because of the liquid fert work we do, so we asked Agrifac to apply two layers of paint in the factory and install aluminium drip trays under the folded booms.

One extra that has been worth its weight in gold is the fast-fold boom. Although our farm is pretty much ring fenced, we have 524 fields over the 1,440ha, the smallest being just 1.2ha.

There are only four fields that I can move between unfolded so the 13 seconds it takes to unfurl 36m helps to keep output high.

We also went with Agrifac’s Strict Height Plus levelling system and Strict Spray Plus PWM that has single-nozzle control and turn compensation.

Another clever addition is a length of 3in pipe connected to the pump that runs along the machine’s chassis. This allows me to drive straight up to the bowser in the field, rather than turning around and reversing, which saves a lot of time when filling away from the yard.

In the cab, I’ve got Gatekeeper mobile that I access from a tablet and all sprayer recommendations are sent to me wirelessly. This helps keep the cab free of paper, which is good, as I like to keep it tidy – I even carry a box of cleaning products with me.

We’ve stopped drilling tramlines as we now download the drilled field areas from the Challenger tractor and input them into the Agrifac’s screen via USB. This allows the sprayer to auto-steer around the headlands and keeps the wheelings in the same place. We consider it as a type of controlled management system, rather than full-blown controlled traffic. 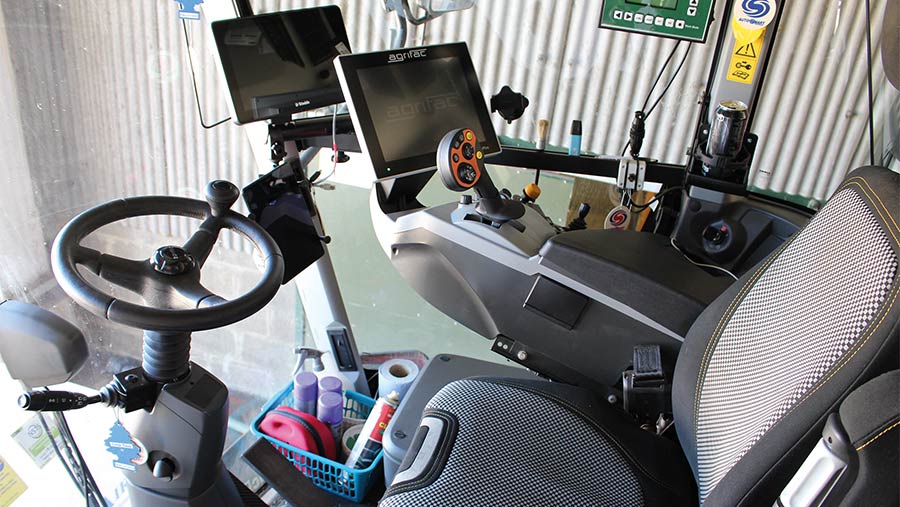 The upshot is that I only have to touch the steering wheel when backing into corners and turning at the end of a run. I clock on average 1,200 hours/year, so the increased accuracy of the GPS helps to lower fatigue during long days.

I’m regularly out spraying at 4am if the weather is good, so we went for the LED package with blue boom lights to illuminate the nozzles. There are also two cameras behind the sprayer on the boom – one facing outwards to check spray pattern and the other rearwards for reversing.

The sprayer has well over 800 hours on it already, and there have been a couple of little niggles, such as the steps not folding and a loose bracket on the booms that wasn’t tightened properly before delivery, but that’s been about it.

I know the support from the fitters is good, too. I remember calling them one afternoon with an issue and they travelled down and stayed in a hotel that evening to be on the farm for 6am the next morning.

The PWM system allows me to alternate pressures for working in less-than-ideal conditions. I tend to run at roughly 3.5bar for regular spraying work and 2bar for liquid fertiliser so that it doesn’t atomise. 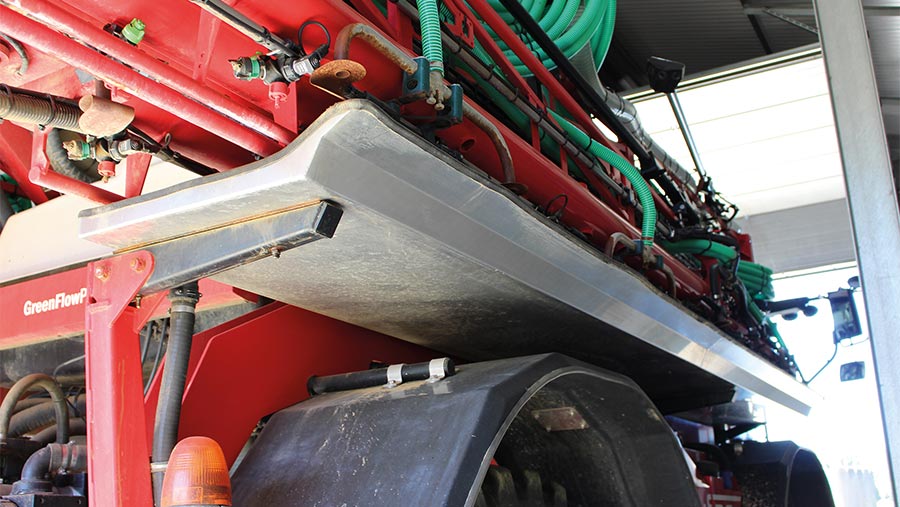 It has vastly improved accuracy and we are starting to notice chemical savings with the single nozzle control. Our Knight had nine sections across 24m, so the Condor has been a huge leap forward.

The Claas-sourced cab is superb and the new Cat 4 filtration system is noticeably better. In the old sprayer, I would drive past a bonfire and the smell would  creep through the filters, but with the Agrifac, I don’t get a whiff.

One downside is that we have had to chop down some of the overhanging tree boughs, as the row crop wheels make the machine pretty leggy.

We have also mounted an Avacast spreader on the front to spin slug pellets or Avadex while spraying. Beforehand, I was spraying pre-emergence and then coming back to apply pellets on another pass. 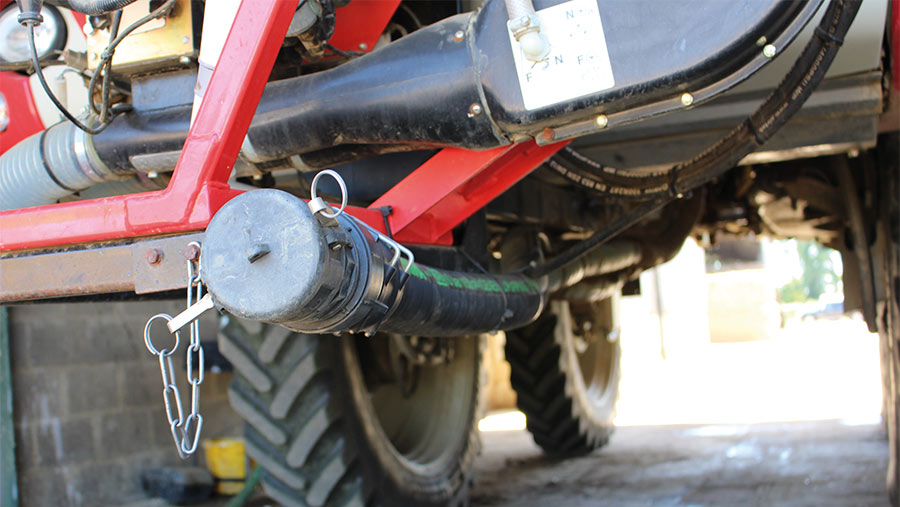 Shortly after I joined, the farm built a new bunded filling shed, which I have taken responsibility for. The main thing I installed was colour-coded racking to avoid confusion with chemicals, but it also means most of the delivery drivers put the chemical in the right area.

Red is for herbicides, orange is for fungicides and the green racks hold adjuvants, insecticides and trace elements.

There are signs in the store for anyone who isn’t familiar with our system. We only have one filling area on the farm, which makes chemical delivery nice and simple. 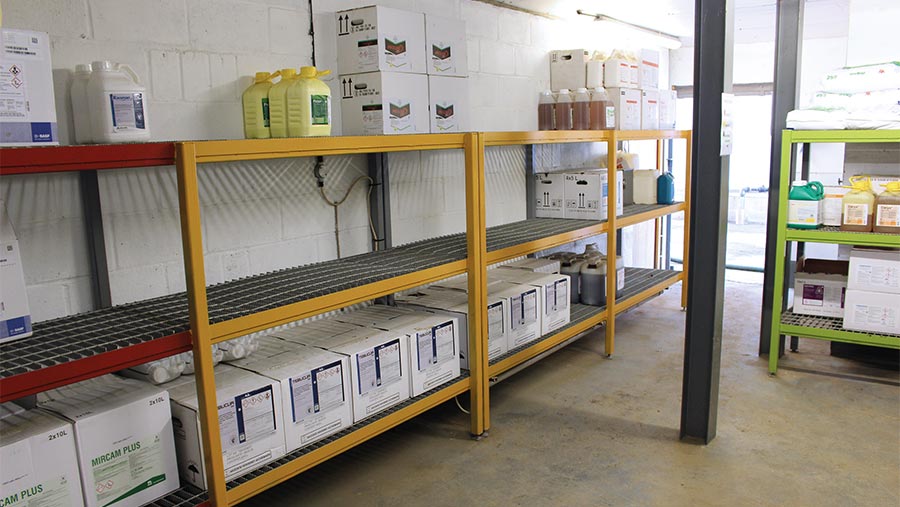 The main shed is a drive-through setup, with the fertiliser tanks just outside. However, we also routed a 3in pipe under the concrete from the tanks, so I can fill up with fert in the shed.

Before harvest, we were hoping to connect a small, disused side shed by adding a door from the filling area to store spares for the sprayer and new PPE.

The farm has a 16,000-litre bowser to occasionally help with output. The main operator is PA-qualified, so he can pre-mix all the main herbicides and pesticides via the 200-litre induction hopper at the farm. I then add the final adjuvants and any other bits and bobs into the hopper when I’m in the field.

We work out a spray plan in the winter with the agronomist to reduce the amount we wash out, as products such as All Clear are expensive