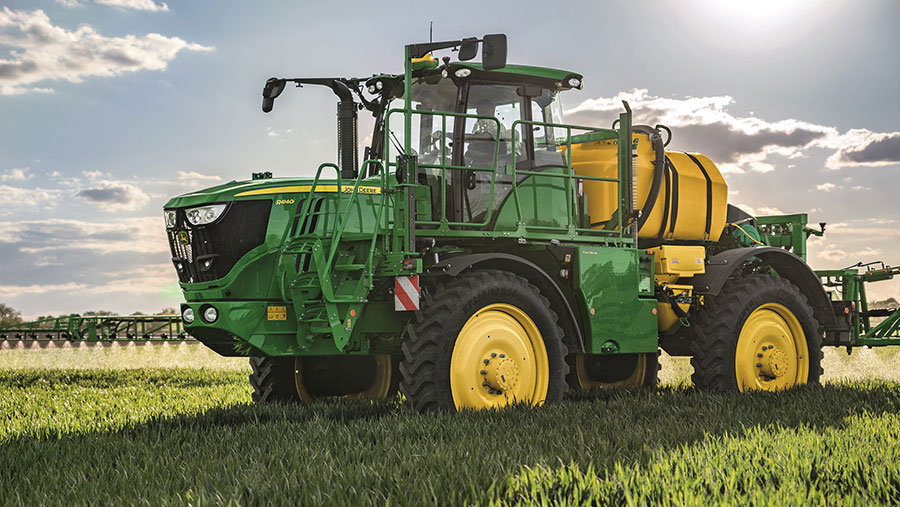 The two new models – R4140i and R4150i – will be built at the firm’s Horst factory in the Netherlands and feature 4,000- and 5,000-litre tanks, respectively. Steel booms from 24m to 36m are available, together with Deere’s PowrSpray spraying system.

A key upgrade has been the introduction of ExactApply, which JD has been offering in the US for the past two years.

The system allows the operator to manually change spray nozzles from the cab or let the machine do it automatically to suit target application rate and forward speed, with each nozzle controlled individually by GPS.

Deere claims operators using its ExactApply system can save roughly £5/ha on chemicals and raise yields by up to 3% by reducing over- and underapplication.

As a further addition to the spray package, pulse width modulation (PWM) is now an option on both machines to keep application rates and droplet size consistent, particularly when turning.

Upgrades to the cab include better integration with the JD 4640 terminal – which is now mounted on the armrest – and JDLink telematics as standard to send and receive data wirelessly. The cab is available in two specification levels and has optional Category 4 protection.

The new machines also feature an optional 50kph transmission to reduce travelling time. Production of the two new models has already begun and they should be available early next year.