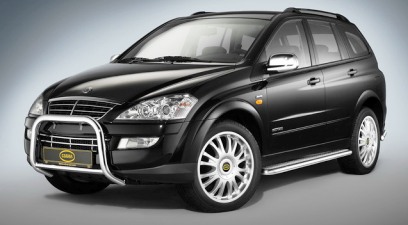 The mid-size 4×4 sector – the place where the Freelander, RAV4, Nissan X-Trail and their mates all hang out – is pretty busy right now. Even more so since the sardines had to shuffle up a bit to accommodate a chubby new boy, Ssangyong’s Kyron.

Priced to compete at £16,999-£22,495, the conventional-chassis Kyron weighs in with the biggest body and the strongest diesel in the class. Also nearly the most flab, but more on that later.

Four variants are on offer, starting with a 2wd-only base model and topping out with a 4wd auto. It’s hard to go on without squaring up to the Kyron’s styling. Unusual is one word; there are others.

Whichever way you look at it, the pinched-up front sits uneasily with a truly oriental rear, the latter resplendent with scallops and shield-shaped lamp clusters.

Still, you don’t see any of that when you’re inside, and the inside is done rather better. The five-door shell takes a quartet of adults in comfort, plus a potential fifth who must perch in the armrest area like a pea on a drum.

The test car – a mid-spec SE – packs generous spec including climate control, leather seats and manual headlamp levelling.Mid-greys and some rather tasteless flecked carpet mark out the interior.

A bulky dash dominates; its circles and angles are striking but like the left-hand-drive handbrake, it just doesn’t work in practice. Better news are the hard-but-comfortable front seats and a seating position that delivers good views and a relaxed driving stance.

Away from smooth roads the story changes. Potholes are handled convincingly by independent front suspension and a coil-sprung beam axle, but the ripples and ridges of a country lane are not.

Here the ride is stiff and over-lively. Luggage for four fits under a standard load bay cover and is accessed from a lift-up tailgate. Part of the standard deal is a net partition, which looks like a dog guard.

Here’s the prospect – 140hp and 229lbf ft from a Ssangyong-developed, 2.0 common rail diesel. And here’s the reality: a leisurely 14.5sec from rest to 60mph, and generally languid pickup through the gears.

Responsibility rests with the Kyron’s weight (2028kg) and the test car’s slow-witted five-speed auto, which often fails to make the most the engine’s healthy spread of torque by contriving to be in the wrong gear at the wrong time.

Compounding the felony is wretched throttle response. Bury the pedal at standstill and nothing – absolutely zilch – happens for a couple of seconds, which can seem like an eternity when you’re committed to joining a stream of traffic.

Rear-wheel drive handles normal travel, with 4wd available on the move from a dash switch. A tight turning circle suits the Kyron to rural life, and will be helpful if you exploit a generous-for-the-class 2300kg towing capacity.

Running solo the Korean rolls through bends, changes direction smartly and grips modestly, though very little of what’s going on at the tyres is reported by light, sanitised power steering.

The omens are good and come as standard on an SE – a low range box with reasonable ratio reduction, traction control for going uphill and descent control for coming down.

A Kyron brings plenty of metal and a lot of kit for your money. It’s at home on the motorway but too uneasy off it; performance is dull and the powertrain needs detail sorting. Largely good cabin, fine brakes, head-shaking styling.