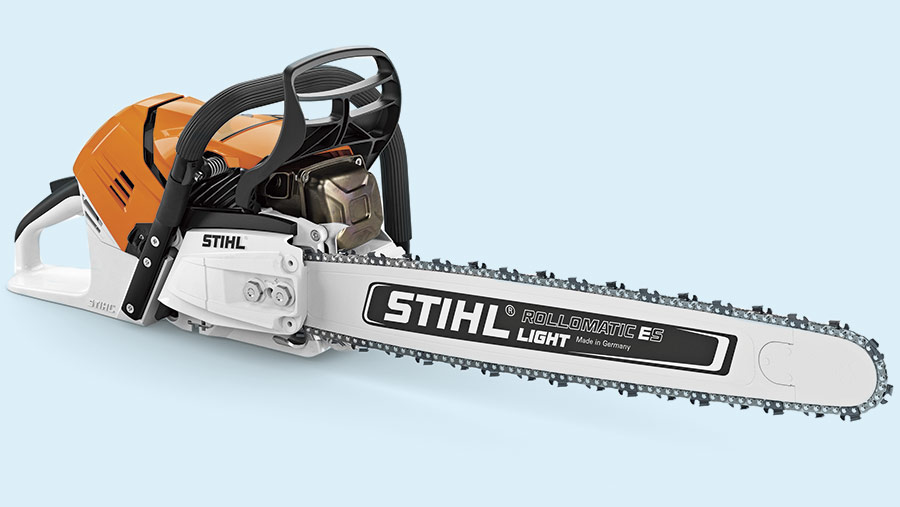 Designated the MS500i, the new model is in the final stages of testing, and is due to go into series production during 2018.

Other benefits are said to include simplified serviceability thanks to a fault memory in the control unit, claimed to be another first for chainsaws.

Fuel mixing is controlled by an electronic sensor, which allows the engine to be built without the incorporation of a carburettor – instead the fuel/air mix being directly adjusted to the ambient conditions when starting.

The relationship between squeezing the throttle and achieving required chain speed is also given a boost by the electronic elements, with the saw chain accelerating from 0 to 100kph within 0.25sec.

Stihl says restructuring the engine design has also helped produce a lighter saw for its power, with the MS500i having a power-to-weight ratio of less than 1.3kg/kW – claimed to be the lowest on the market for a saw of its type.

Meanwhile, the firm continues to expand its range of products powered by rechargeable lithium-ion batteries. With many farm saws spending minimal time cutting down trees and more on light jobs such as de-limbing branches around harvest fields, taking the tops off posts and cutting up firewood, Stihl suggests cordless saws may have a place on the farm, particularly where nearby access to petrol can be a problem and/or noise is an issue.

The most powerful cordless chainsaw in its range, the MSA 200 C-BQ is available with a 14in bar, and can run from 35-200min on a single charge, depending on battery type specified and the work in hand.

The most recent battery power unit addition to support its range of KombiSystem power tools is Stihl’s KombiMotor KMA 130 R.

Almost noiseless in operation, it uses an EC motor started via a button, with speed selectable in three settings.

The 36V lithium-ion battery is worn as a backpack and attachments include a rotary brush, blower and brushcutter.

Stihl has new product developments in other areas, including the SE 133 ME wet/dry vacuum cleaner. Intake speed can be infinitely adjusted as required, and automatic filter cleaning maintains optimum suction power.

There’s also a new TS 440 circular cut-off saw, said to have been engineered for limited access cuts, with extended guard adjustability allowing the top of the cutting wheel to be exposed.

It is aimed at situations where traditional guard positions limit access, such as the undersides of concrete, metal, cast iron or stone pipes in trenches, when the ability to excavate is limited.

The expanded guard adjustability is made possible by the Stihl‘s new QuickStop sensor-activated wheel brake technology, said to be a world first and capable of stopping the rotation of the cutting wheel in fractions of a second if kickback occurs.