Every year more than 500 Land Rover Defenders are stolen from farms across the UK. And that number is on the up, according to figures from the NFU Mutual, with huge increases in thefts of the iconic 4×4 in the past 12 months. In the north-east of England alone, thefts have rocketed by 69%.

While some of that might be down to the ending of production of the Defender in Solihull, much of the increase in thefts is because the vehicle lacks many of the security devices you would find on any other road-going runabout.

These are just a small selection of the bits of kit available to help secure farm vehicles. If you know of others that you would recommend then please let us know – email fwmachinery@rbi.co.uk or tweet @farmersweekly

But help is at hand, as there are numerous bits of kit available to make Defenders more secure and certain devices can help to reduce insurance premiums too.

Check out the offers available before shelling out full price on any anti-theft kit.

Here are just a few of the anti-theft devices on the market:

Gwent-based Foundry 4×4 makes a selection of anti-theft devices for Defenders under the X-Defend brand. The first is a beefed-up steering column lock.

Effectively a steel sleeve that slides over the ignition barrel, it is strong enough to prevent the barrel being removed or the end being broken off. It costs £76. 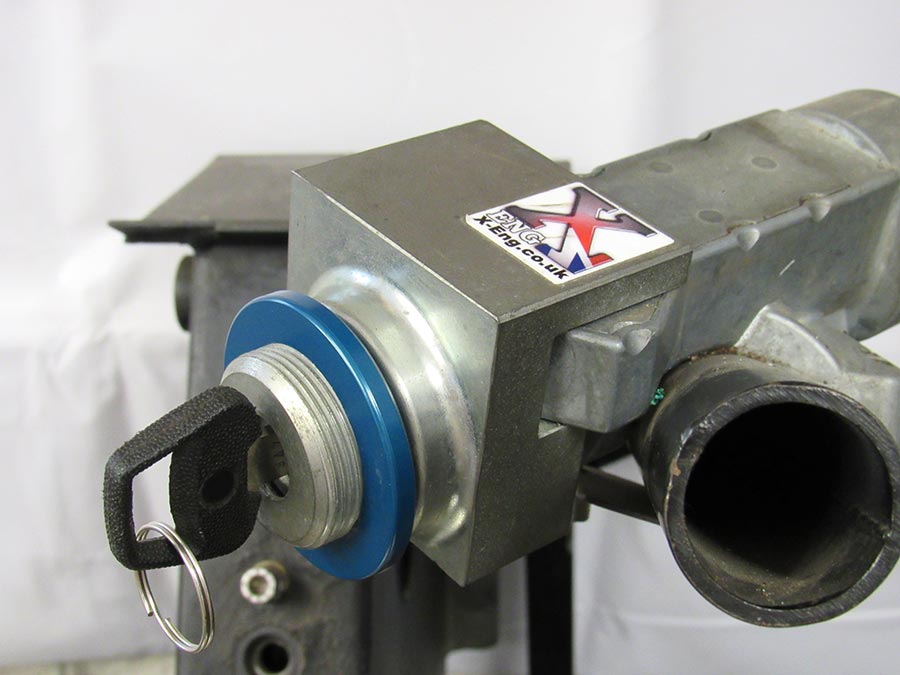 The X-Defend gearlock locks the main gearstick and range-box levers together. With one end clamped on the short, stubby stick, the other rotates to grasp the longer lever with a bayonet-type arrangement, securing the vehicle in either third or fifth gear, high range.

The kit is supplied with a security nut to prevent the gear stick being unbolted from the gearbox and a lock nut to prevent the range lever knob from being pulled off. To lock, you fit the two bayonet connectors on the two gear sticks, twist the two tubes in opposite directions and push the lock barrel.

It will lock in three different positions to accommodate the variations between one vehicle and another. Two different versions are available – both £70 – one for models where reverse is positioned opposite fifth gear, the other where reverse is next to first. 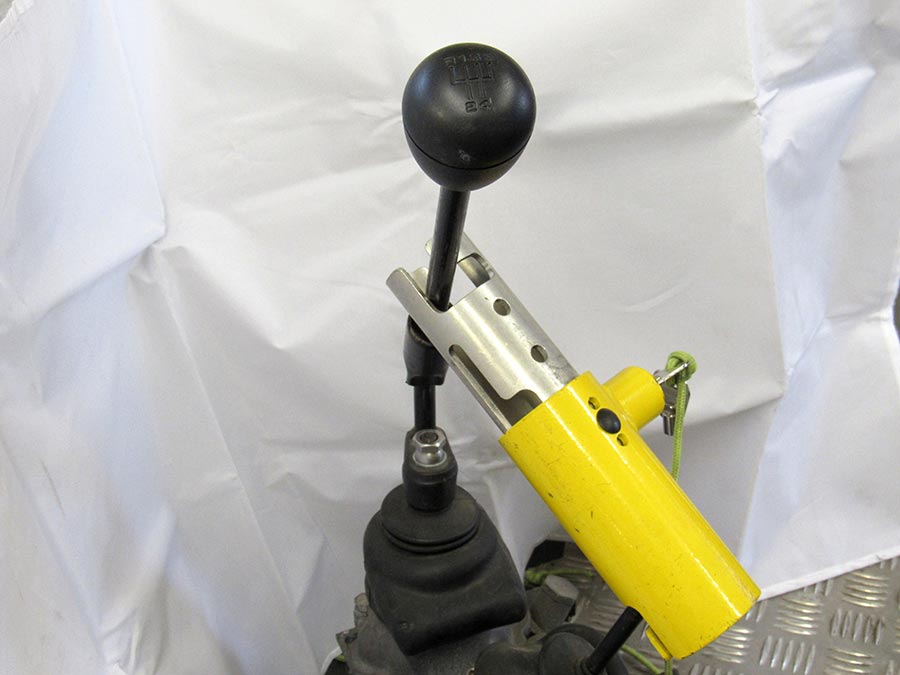 The final X-Defend product is a simple stainless steel hinged plate that, when in an upright position, clamps and locks onto to the brake pedal, also obstructing access to the throttle and clutch.

When not in use it folds down flat with the floor, forming a footwell liner. To lock it you release the catch which holds it against the seat box and slam it against the pedals. A steel claw grabs the brake pedal shaft and ratchets in tight against it.

To unlock, you turn the key, which releases the plate from the brake pedal. It can then fold flat on the floor.

It costs £170 and is said to be easy to fit. However, because of the hand-built nature of the Defender, the positioning of the bonnet release catch is fairly random and can prove problematical. Relocating it can make the fitting job take a bit longer. 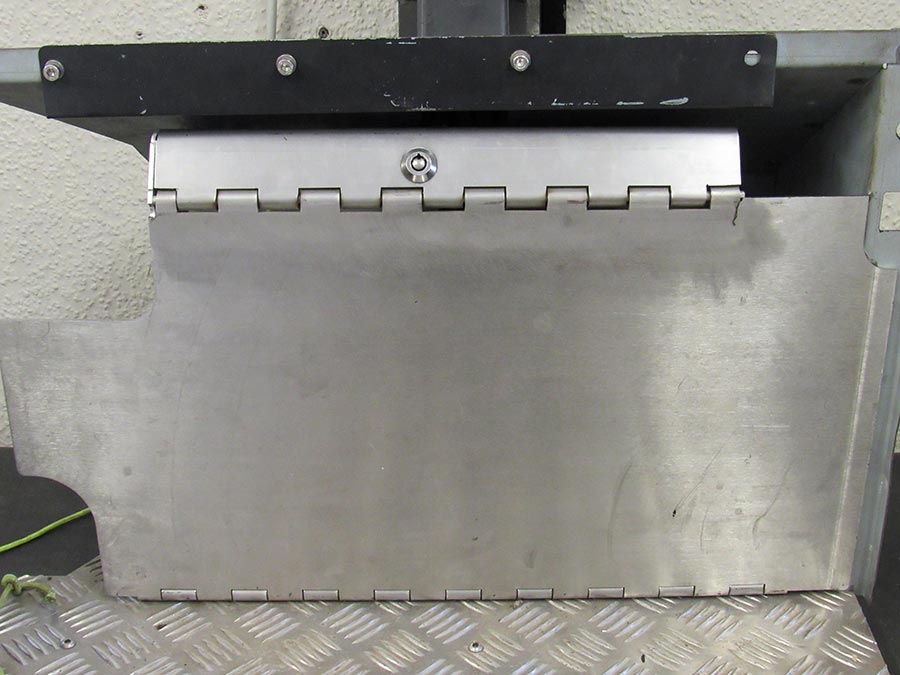 Spinney Engineering’s Rat Trap is a device that uses a ratchet mechanism to lock the output shaft on the rear of the Defender’s transfer box so it cannot be moved without being physically dragged with all four wheels locked up.

The only obvious sign of it is the lock barrel protruding from the seat box in the driver’s footwell and that’s how it’s activated – by simply turning a key it locks the entire driveline. For added security, it has a protected barrel that will lock solid if anyone tries to tamper with it.

Fitting the Rat Trap involves removing the parking brake shoes and disconnecting the cable, pulling off the rear prop-shaft and then fitting it directly onto the transfer box output flange – a four-hour job. It costs £590.

There are heaps of tracking systems on the market to aid in tracing and recovering stolen vehicles, but the one favoured by many Defender owners is SkyTag.

It provides pinpoint GPS tracking should the vehicle be stolen and will alert the owner to any tampering via text or email.

The unit is the size of a computer mouse and can be located anywhere in the vehicle, working best with the minimum of metal around it. It can send a signal through the aluminium skin of a Land Rover with ease. The system is simple to install, only requiring a permanent live (12-24V) and an earth. An ignition-switched live is required should you want to track your vehicle yourself.

In the event of a theft the owner contacts the police and SkyTag. The firm then activates the tracking unit and contacts the police directly to give them the Defender’s location. The system can be automatically triggered by movement of the vehicle outside a set zone or at certain times.

The device itself costs £249, plus a set monthly fee varying between £6.99 and £12.99 depending on the level of service you opt for. SkyTag offers a discount for Farmers Weekly readers – go to the Skytag website and choose “Bundle Pack”, use the code “FW16” and this will halve the checkout price.

The Clutch Claw is a simple device made of box-section steel that clamps the brake and clutch pedals together and stops them being depressed with a slotted steel bar. Once positioned this central bar braces down against the floor and a locking pin slides through to secure it.

Fitted with a flashing LED to alert would-be thieves of its presence, it costs £93.95. 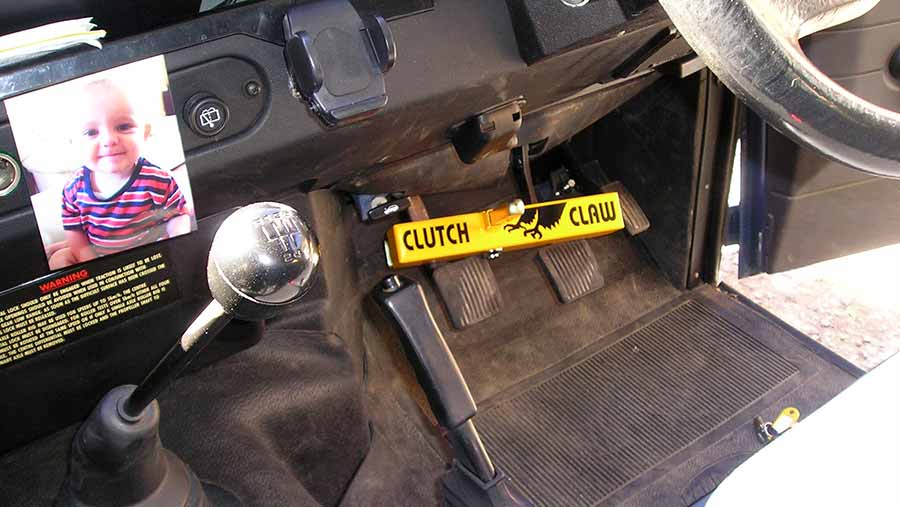 Designed to immobilise the Defender’s clutch, brakes and throttle, the ‘ardcase is a 3mm steel box that completely encases all three pedals. A seven-lever deadlock secures it in place, rendering the vehicle undriveable. When not in use it is removed and placed in a storage box bolted to the dash, bulkhead or anywhere else in the vehicle.

A whole series of different versions are available to fit the many different shapes and sizes of Land Rover that have come and gone over the past seven decades. Prices range from £142.99 to £190. 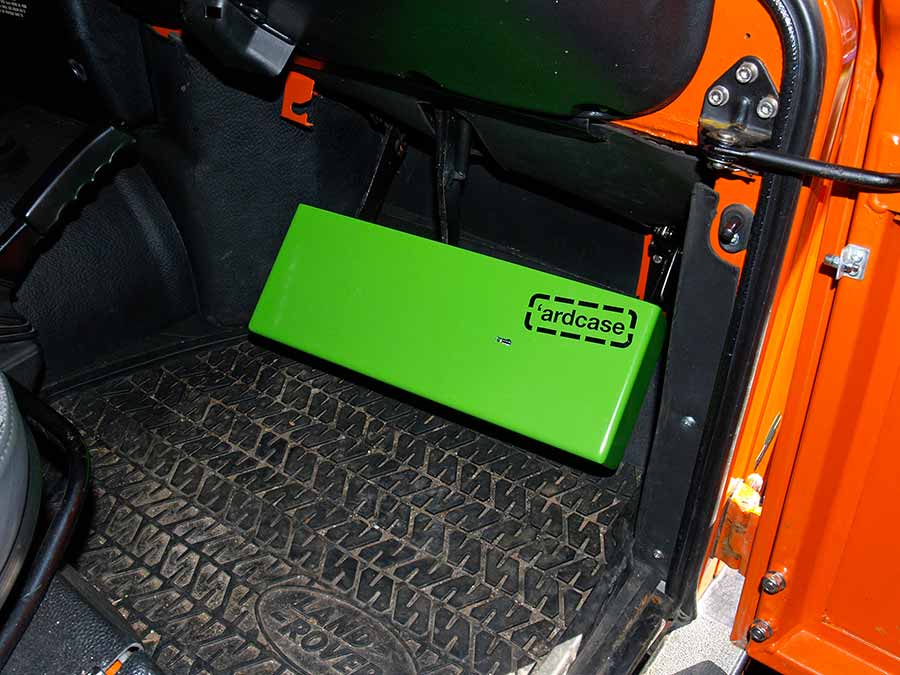