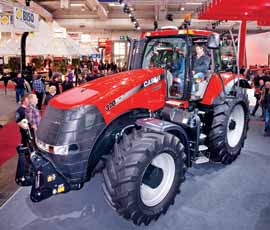 A total of 14,094 tractors over 50hp were sold in 2011, according to industry body the Agricultural Engineers Association. That amounts to an increase of 5.6% on the 2010 figure. This follows a period of decline from the 2008 high point of 18,564, so this level of registrations is near the average for the last 10 years.


The average size of tractor sold in 2011 is provisionally put at 144.3hp which was 1.8% above the preceding year. It’s risen steadily over the course of the decade, with the average hp 10 years ago put at 121hp.


The immediate outlook for sales appears strong, says the AEA, with UK farming enjoying a period of reasonable prosperity. There is also a continuing stimulus for farmers to make early decisions as the Initial Annual (tax) Allowances will come to an end in April. At this time the trade appears to believe sales should hold up quite well in 2012 but are likely to be concentrated in the earlier part of the year, says AEA’s Chris Evans.