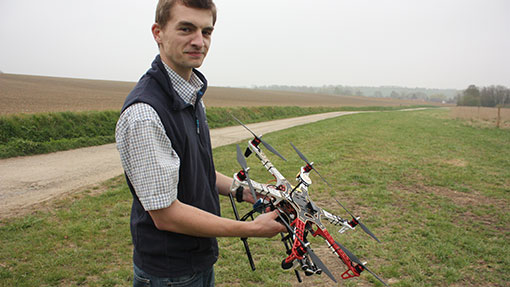 If you thought drones were vastly-expensive pieces of equipment that were only any good for high-tech crop-sensing, think again. According to Suffolk farmer Richard Maddever, they have the potential to provide an effective – and relatively quiet – way of scaring pigeons.

Equally important, they aren’t as fragile and expensive as you might think. In fact, £500 can buy you a basic tool that will do the job pretty effectively.

Mr Maddever and his father Peter grow 800ha of cereals, rape and sugar beet at Scotts Farm, near Sudbury in Suffolk. Like every other arable farmer, they spend a lot of time and money on gas guns, rope bangers and other equipment.

When prices of drones started to drop from their original £5,000-10,000 a decade ago, he began to look at what was on the market. Earlier this year he took the plunge.

Called a DJI F550, it has six rotors, weighs 2.5kg and is mostly made of plastic and carbon fibre. “I wanted to put it together myself, so I knew how it worked,” says Mr Maddever. “It’s not that difficult to do, but you can get the retailer to assemble it as well.” A 12V 5,500mA lithium polymer battery (about the size of a laptop battery) provides the power and payload is 1.3kg.

Six contra-rotating rotors, each about 10cm across, provide the lift. Speeding up and slowing down the different rotors allows it to climb, drop, turn and change direction very quickly. While it can tootle along at 1mph, top speed is 40mph (50-60mph with a tail-wind) and it will stay on the air for 15-20min. In that time the drone covers a lot of ground very quickly. It’s also a lot quieter than you’d expect.

How do you control it?

There are two ways of controlling it. An “autopilot” mode simply involves bringing up the Google map of the fields you want to cover on an iPad. You then set GPS waypoints across the fields, dial in the forward speed and height.

When you hit go, the drone rises quickly into the air, turns towards the direction you have keyed in and shoots off into the distance. When it has completed its tour, it quietly drops down on the exact spot from where it first lifted.

You can also fly it manually with the sort of controller used for model planes.

Won’t it just plunge to the ground the first time I use it?

Forget cheap radio-controlled helicopters – the hexacopter is self-stabilising and almost crash-proof. By constantly altering the speed of the rotors, it keeps itself astonishingly level. As soon as it senses that the battery is about to run out, it will automatically (and gently) drop to the ground.

On your own land (and as long as you see the drone) you’re fine, says Mr Maddever, and locals who have seen his hexacopter have been interested rather than spooked. Civil Aviation Authority rules mean you can’t go higher then 400ft and its a good idea to give horses, walkers and power lines a wide berth…

What do the pigeons make of it?

“I initially tried it at a height of just 5m and a speed of 30mph,” he says. “But I quickly learned that the pigeons are more scared when it’s higher, like a bird of prey. So I now use it at 15m height, which works well.” Mr Maddever also fitted the hexacopter with two multi-LED “eyes” and a siren to unsettle the pigeons.

The unit that Mr Maddever bought cost £1,000 from Newcastle drone specialist Heliguy and can be used both manually and on autopilot. If you are happy to dispense with the auto function, it would cost £500. That’s probably what many farmers annually spend on conventional rope bangers, rockets and gas-gun bottles.

Batteries cost £50 apiece and can be charged/recharged about 500 times.

Mr Maddever has already had some success in taking aerial pictures of blackgrass patches on his fields and plans to fit a near infra-red filter to improve that. He also plans to buy a bigger 9kg machine with 4.5kg payload and folding arms for easier transportation.