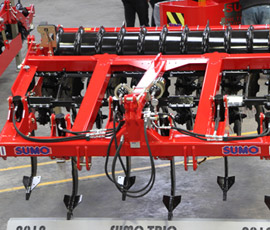 Yorkshire cultivator and drill maker Sumo launched new 2.5m and 3m mounted versions of its Trio cultivator, as well as a new drill, at its annual open day last week.

This latest Trio is the fourth new version in the 10 years since it was introduced and offers users some significant changes.

There are now two-leg options. One is the existing single-piece point, but it’s joined by a new single-bolt, quick-change tungsten carbide tipped point and a replaceable shin. This new version is claimed to reduce draft requirement by 10%.

The company is now fitting auto-reset legs as standard, pointing out that the system also helps prevent shock loading on tractor linkages and allows legs to be raised for greater clearance during transport.

The twin disc unit remains as before but the press is now smaller – 508mm diameter rather than 609mm. The main reason, says Sumo, was the need to limit implement length and weight. However, it has also given an opportunity to introduce a press with replaceable segmented ring edges – four on each ring.

Due to be launched in 2013, the Versaplus drill involves a new configuration of tines and discs. It kicks off with a set of soil-loosening legs, then there are two rows of discs followed by four press/transport wheels, the latter spanning the width of the drill.

“The legs create the depth of soil loosening for access to moisture and to encourage strong root growth,” says Sumo drill specialist Marcus Ainsley, “but instead of broadcasting the seed, the drill places it properly after the discs have created a seed-bed,” he explains. “It has to be better than simply broadcasting it.”

On trials this year, oilseed rape was sown in the two rows which straddled each of the six legs, with the two rows between blanked off – reversing the top of the distribution head blanks off the required outlets.

When the legs are not needed (when drilling cereals on plough, for example) they and their opening discs can be raised clear of the ground.

Unlike the Versadrill, which has its two transport wheels lifted clear when the drill is in work, the Versaplus keeps its four wheels on the ground, the weight they carry can be transferred to or from the Moore system drill unit to increase or reduce disc pressure, which can be as high as 200kg per coulter.

Available in 3m, and folding 4m and 6m versions, hopper capacity for the 3m is 2,500 litres. As before, the fan is powered hydraulically and the electrically driven single cassette metering system is controlled by groundspeed radar.

Versaplus which has a set of discs positioned between the soil loosening legs and the Moore drill system.