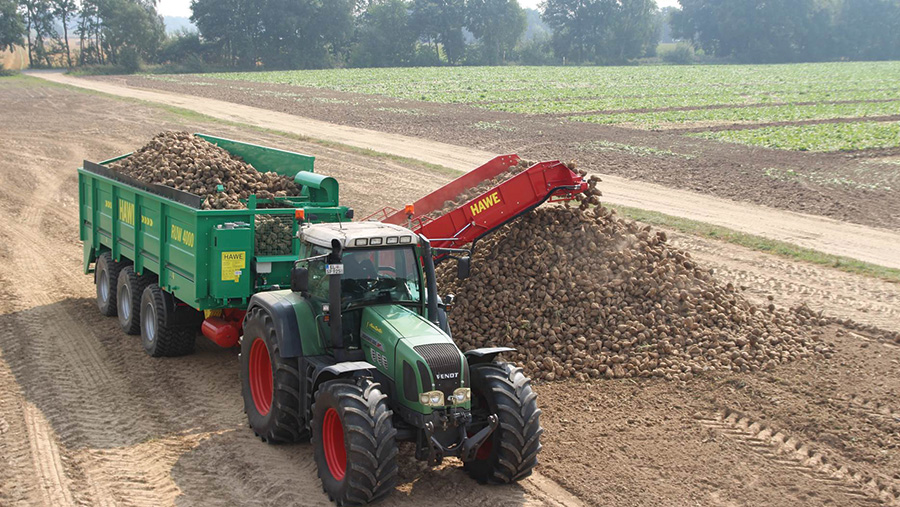 In a bid to keep up with the monster outputs of 40ft cut combines or 1,000hp foragers, trailer manufacturers have been under pressure to push the limits with longer, taller and higher-tech rigs than we have ever seen before.

Sales of specialist chasers and trailers have rocketed in recent years, but there is a price to pay for the bigger capacities and chock-full specifications that are becoming the norm.

Even the largest contractors and farmers can be excused for getting sweaty palms at the prospect of spending north of £60,000 on a tri-axle trailer with all the extras, particularly if it is a specialist unit like a grain chaser that suits just a single application.

One option becoming more popular in continental Europe is to buy a single trailer chassis and multiple bodies to mount to it.

That way, buyers can have a grain chaser, root trailer and muckspreader capable of keeping up with the huge harvesters without having to spend fortunes on top-spec running gear for each.

The starting point of any swap-body trailer is a strong chassis that can carry steering axles and leaf or hydraulic suspension.

Twist locks, which are standard in the container transport industry, are used instead of screw systems to fix the body in place.

Easy coupling of hydraulic hoses and electronics is also important to minimise the chore of switching from one to another.

The most popular combinations are grain and maize, or grain and muck, as they allow owners to get the most out of the machines through the year.

Hawe has plenty of rivals on the swappable bodies scene, with German manufacturers Bergmann, Strautmann and Tebbe, as well as Joskin from Belgium, all jostling for sales.

The total price for a chassis, grain chaser and beet chaser is a shade under £132,000, compared with the £153,000 to buy two separate haulage rigs.

Most UK enquiries are for the triple axle chassis with grain chaser and silage push-off body, according to importer Suffolk Farm Machinery.

An increasing number of buyers are also taking interest in Isobus connections, weighs cells and Hawe’s Digistar system, which automatically recognises individual trailers so that maximum load weights can be programmed.

Head east across Germany and the farms get gradually bigger and run more sophisticated and expensive fleets of machinery.

Agro Bördegrün is situated just outside Magdeburg. It farms 4,000ha as well as running a petrol station and being the local agent for Ropa beet harvesters.

It also has a 15% share in a large anaerobic digestion plant.

The group harvests 400ha of its own beet and a further 500ha on contract, all of which is transported by the chaser to the field edge before a Maus 5 lifts it into a fleet of lorries.

“Having a grain and beet chaser means we maximise the output of both harvesters,” says farm manager Eric Krull.

“The system works well for us because there’s no overlap between the two harvests and we have saved money compared with buying two separate chasers.”

The rig is pulled by a 360hp Case CVX 370, because a fair bit of power is needed to keep pace with the three combines. However, Mr Krull is happy to run the machine on just one set of tyres for the two harvests – Michelin 600 x 55 R26.5 Cargo X Bib flotations.

The trailer is rated to 40kph which is the maximum speed allowed before it qualifies as a truck and requires an inspection every six months, rather than every two years.

“Switching the bodies over takes less than an hour, so it’s the cleaning down of the chassis rather than the actual body swap that takes the time,” says Mr Krull.

Hawe is a family owned, German company that produces about 300 units a year – some way behind the likes of Fliegl and Krampe.

A third of the machines rolling off the production line are grain chasers, but the company also regularly uses its factory to convert existing kit for customers.

Large trailer manufacturers such as Hawe are increasingly feeling the strain of EU legislation that limits the size of road-going machines to no more than 12m long, 3m wide and 4m tall.

Having already reached the physical limits of the rules, the company is switching its attention to programmes that improve the efficiency of the job.

One of those is the use of weighcells to monitor crop flow. Hawe’s Autolog system allows the chaser to be programmed to deliver a preset quantity of material into particular truck or trailer.

The company is also working on software to optimise the position of combine, chaser and trailers during loading and unloading.

Power to the tracks was provided by the tractor pto driving an on-board pump, but the load limit on the tracks meant that they could only support a 20t payload and top speeds of 40kph.

The company is working with Claas to build a system that can cope with higher payloads.