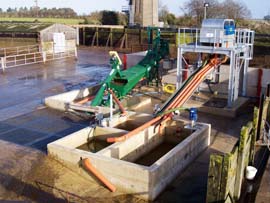 But it has one serious failing, which has limited its use for the majority of dairy farmers. And that is its ability to reduce, sometimes in only a few days, the inner workings of pumps to ineffective lumps of congealed rubber and flakes of deformed metal. Plus its reluctance to go anywhere other than at a bottom of lagoon in one immovable, solid mass.

Long-time sand users have usually worked out their own systems of handling the sand that inevitably escapes each day from cubicles and finds its way into slurry passages and then into lagoons. This loss-rate usually amounts to about 5t a cow every year.

The simplest system is to flush everything into a lagoon, let the sand settle to the bottom and just pump off the surface water. When the sand rises too high, it’s time to move in with a digger and (if you can find a contractor prepared to do it) spread the sand on fields.

An alternative is to invest in a sand separation system, which will not only take sand out of slurry so it can be safely pumped, but will also clean the sand so it can be re-used.

On this score, US company, McLanahan Corporation’s Sand-Manure Separator (SMS), which is imported by Midland Slurry Systems has received significant press coverage since one was installed on a 350-cow Wiltshire dairy farm about six years ago.

Working on the principle that sand is heavier than slurry, a mix of sand and slurry is fed into an auger, which slowly turns and separates out the sand as it winds the mixture upwards. Clean water can be added to wash the sand before the auger deposits it over a wall into a storage bay.

Meanwhile, the now sand-free slurry can be pumped to a lagoon to await spreading – usually being passed through a separator to remove the solids on the way.

The retrieved sand needs to be stored for a while before it is used as bedding in the cubicles to ensure it is free from harmful bacteria.

In terms of costs and savings for this farm, the reduced amount of purchased sand is estimated to save more than £20,000 each year with further savings on spreading costs. The price of the installation is about £180,000 so the payback period could be within five years.

Such systems are well above the average dairy farmer’s budget, but the system now being used at Reading University’s dairy farm could be more affordable. Costing less than a quarter of the price of an SMS unit, the Reading system is a way of separating sand out of slurry – but not re-using the sand.

It centres on a 12m-wide, 15m-long storage area, with a sloping floor to create a depth of about 3m at one end and be at ground level at the other. Within this are two lower-level separating walls which divide the area into three sections. It is, in effect, a sloping pit with three bays.

In operation, the slurry and sand are mixed to keep the sand in suspension and transferred to the separator using a pump that has been designed to handle sand. An example is the pump produced by McLanaham which has a replaceable rubber lining and was built to pump sand out of a quarry. Costing more than £12,500, these pumps are not cheap, but they are designed to last.

The separator’s screen takes out the solids and delivers the liquid and sand mix to the first of the three bays with their sloping floors. This starts to separate out, with the heavier sand grains landing on the sloping concrete floor and remaining in the deeper areas.

Meanwhile, the liquid slowly flows over into the next bay – some may flow over the wall, some may flow in from the shallow end – but all the while the sand is being deposited on the floor of the bays.

When it arrives in the third bay the sand has all but disappeared and the remaining sand-free liquid is then pumped off to the field or stored as dirty water.

After a few months’ operation, sand levels will have built up and a telescopic loader and bucket is used to clean it out. It can be put to a variety of uses, but cannot be re-used for bedding.

Many dairy farmers using or contemplating using sand for bedding will find the simplicity of the Reading University system attractive. With few moving parts, it could provide an attractive and economical solution to the problems of using sand as bedding. 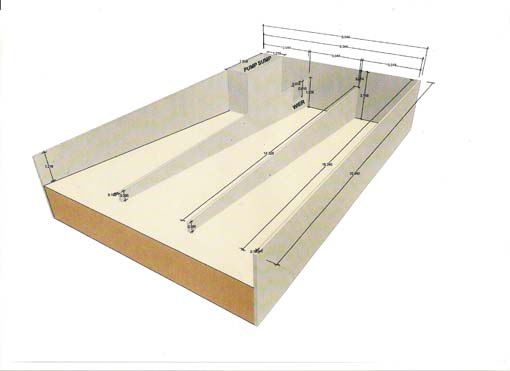 The settlement bays used at Reading University. Sand and liquid enters to the right and flows slowly round to the pump on the left. When the time comes to empty the sand, a loader can drive straight in.