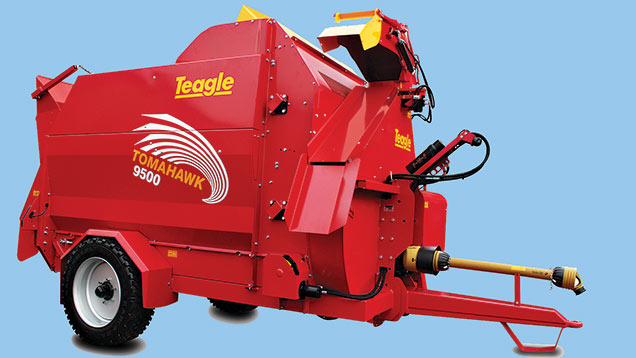 Cornish company Teagle is the latest maker to use Bluetooth to allow operator and machine to communicate with each other with its Tomahawk 9500 feeder-bedder.

The model, available for the 2015-16 season, also has a wider body that, says Teagle, increases capacity and eases loading.

At the same time, performance is said to be improved thanks to a large-diameter fan and twin cross-beaters which deliver an increased output of straw, baled chopped silage and clamped materials.

Capacity has also been increased from 6cu m to 8cu m, says the company, however, an overall length of only 5.2m is said to ensure that the compact machine has good manoeuvrability around farm buildings.

The 9500 sits near the top end of the British-built Tomahawk range, next to its big brother the T1010. Both models are available in side- and swivel-chute formats, with braked axle and weigh-cell options also available.

The wide body design (the feed chamber measures 1.68m) was originally introduced by Teagle in 2011 in its T8500 series.

It uses a large-diameter fan for greater airflow and blow distance, with a Hardox coating within the fan housing said to give longevity for the high work rates expected from this new machine.

For operators looking to feed a simple mixed diet to stock, the machine can be supplied with optional weigh cells and a recirculation system.

Large 305/55 R22 tyres, mudguards and road lights are fitted as many existing 9090 operators use their machines on more than one site. Braked axles can be supplied. Prices start at £22,400.