UK farming is lagging behind its key competitors in terms of productivity, as a report from the Agricultural and Horticultural Development Board (AHDB) reveals.

It showed that producers in Germany, France, the Netherlands and the USA have all pulled ahead, generating far more agricultural output for the same levels of agricultural input.

The AHDB suggests this productivity deficit has cost the UK economy more than £4bn since the start of the century. And part of the problem is the lack of practical R&D, with too great an emphasis on “blue-sky thinking” and too little on “near-market” research.

This is something the Agri-tech Cornwall Project is seeking to address, with three particular pieces of work, which could have on-farm applications in the very near future: robotic harvesters, slurry management technology and soil testing.

See also: Video: Hands Free Hectare – what next for the farming robots? 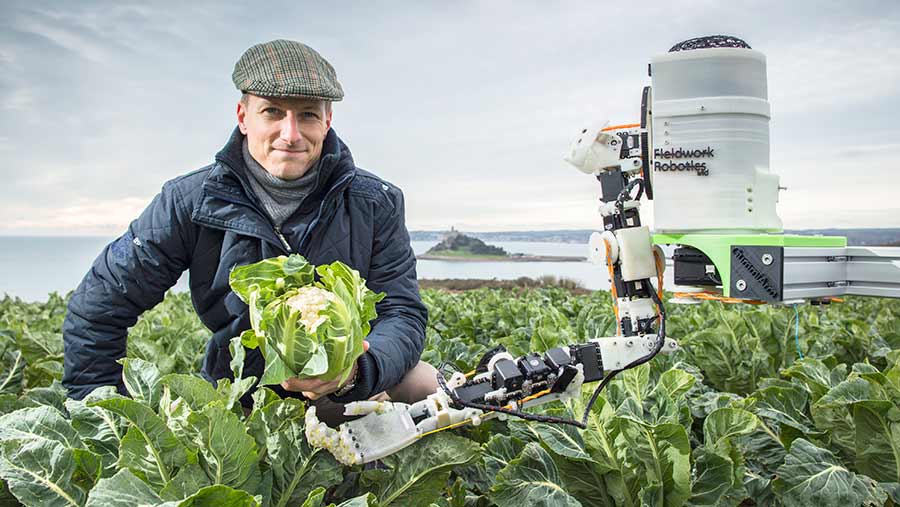 Growers concerned about workforce shortages in the wake of Brexit could soon have an alternative solution – robots.

Work at the University of Plymouth is bringing researchers together with producers in Cornwall to create robots that could potentially operate alongside their existing workforces to ensure any availability gaps are filled.

For example, the ABC (Automated Brassica harvest in Cornwall) project is developing the cutting-edge technology to help with the cauliflower harvest – and potentially other fieldwork operations.

Dr Stoelen’s vision is to create small, mobile machines with cameras and sensors to make real-time, 3D models of a crop. By assessing the information they assimilate, they can recognise which parts to collect and which to leave.

It is building on the successes of Dr Stoelen’s GummiArm robot, which has two arms and, in many ways, moves more like a human than a machine. At the heart of his work is the concept of “variable stiffness” – robotic arms with joints that can be made soft or stiff, depending on the task.

“A lot of producers are very worried about where they will get their reasonably priced manual labour from – and rightly so,” says Dr Stoelen. “Manual harvesting also represents a large portion of their total costs. So looking to address that, especially against a backdrop of Brexit, is very important.”

With robots recording images and touch-data from all over a field in real-time, it may also be possible to extend their application beyond harvest.

Dr Stoelen says: “These robots are going to be a massive big-data application. Machines could even be ‘repurposed’ throughout the growing season, allowing the core technology to be rolled out to other operations, such as weeding or the application of pesticides.

“If the robot is reconfigurable, it could be relevant to other brassicas and indeed other crops.”

Ultimately, it’s about making life easier and simpler for farmers. But such technology might also encourage more young people to choose a career in agriculture.

“This technology is evolving rapidly, costs are coming down and developments can happen fast, which means it’s not too long before technology like this becomes a practical and commercially viable reality.

“Agriculture has been underestimated as a potential area for applying advance robotics, but now could be its time.” 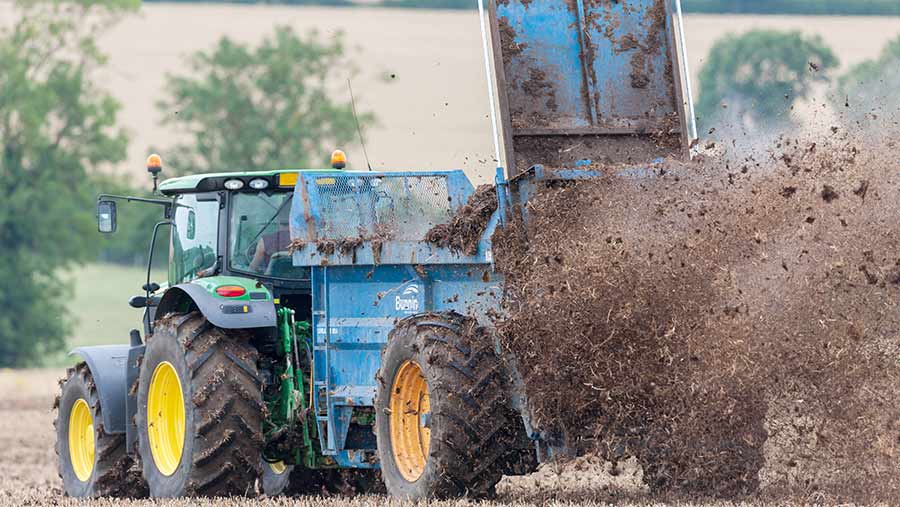 Becky Willson is on a mission to change the way people think about manure.

Traditionally, it’s been seen as a waste product, but the reality is that it is a valuable resource, says the technical specialist at Duchy College’s Rural Business School.

Changing a mindset – along with the associated working practices – is an ambitious aim. But Ms Willson is setting out to do this by developing a new version of the innovative Farm Crap App.

First launched in 2012, this free-to-use smartphone app contained a calculator and built-in image library, enabling farmers to work out a “fertiliser equivalent” at different spreading rates, and so refine their manure, slurry and poultry litter applications.

The new version will be more of a whole-farm nutrient planning tool. It will contain all the data from the latest version of Defra’s Fertiliser Manual (RB209), which suggests the level of nutrients required to provide the best financial return for different crops.

It will also have added functionality aimed at contractors and consultants to make it “a holistic system that works all the way up the chain”.

At its core is an issue of interpretation, says Ms Wilson. “The information about manure and its application is all out there – and a lot generally is known about the science. But farmers can perceive that as boring, so they aren’t valuing their manure or integrating it with their other fertiliser applications. We’re turning the information into a format that makes sense for them.”

Compliance with legislation is also an aim, so the app developers are seeing how it can help with completing paperwork – for example, for people who are in nitrate-vulnerable zones.

“Generic facts, figures, tables and best practice documents can be sleep-inducing to farmers. The new Farm Crap App will help turn them into a format that has value and makes a real difference on the ground.” 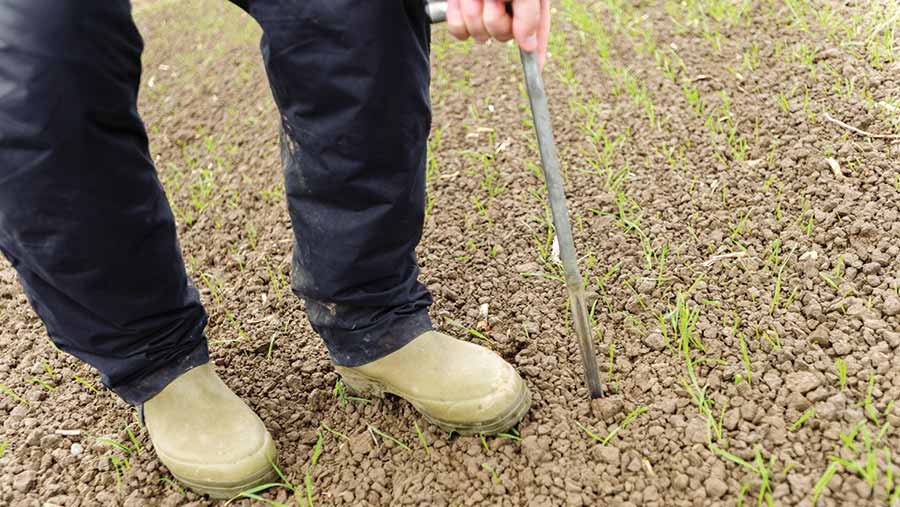 Growers could soon be applying their phosphorus in a more cost-effective, sustainable and environmentally friendly way, thanks to a unique new portable sensor.

CleanGrow and a team at Rothamsted Research, North Wyke, are developing the piece of kit which aims to allow farmers to quickly measure the amount of this essential nutrient in the soil, helping them optimise application rates.

Currently, farmers take a range of samples from a field or fields and send them off for analysis, often “pooling” them to save cost, says CleanGrow’s co-founder and molecular biologist Roy O’Mahony.

Waiting days for the results to come back means they can miss weather windows and, when the information does arrive, it might lead to a single application rate across a whole field – when in practice the levels of the nutrient within that field might vary widely.

Dr O’Mahony has therefore developed an ion-selective electrode, meaning that real-time, in-the-field testing could soon be a reality.

“We aim to develop a rapid test, allowing farmers and agronomists to divide fields into different sections, so they know what the levels [of phosphorous] are and, therefore, can add what’s needed with far more precision.”

“A farmer could be spending hundreds of pounds every year on the testing alone but, with profit margins tight, they’re in a Catch-22. They might not be able to afford to take lots of samples but, if you can’t measure it, you can’t manage it.”

According to Rothamsted biogeochemist Martin Blackwell, there is also a big availability issue on the horizon. “Phosphate is a finite resource and there will come a point when we simply run out of it. The market is already unpredictable.”

The “PhosField” project will build on previous work by Dr Blackwell and Dr Hawkins, in which they mapped the “critical P curve”, showing necessary application rates to achieve optimum yields for different crops, in various soils.

All three pieces of work described above are supported by the Agri-tech Cornwall Project – a three-year, £10m initiative supporting research, development and innovation into agricultural technologies that boost the agricultural, horticultural and food sectors in Cornwall and the Isles of Scilly.

Part-funded by the European Regional Development Fund, with match-funding from Cornwall Council and research partners, it helps small and medium-sized companies and organisations develop ideas to improve efficiency, profitability and resilience.

ACP is led by Duchy College’s Rural Business School in partnership with Exeter University, Plymouth University, Rothamsted Research and Cornwall Development Company. It can help with grants, research and graduate placements. Find out more at www.agritechcornwall.co.uk.