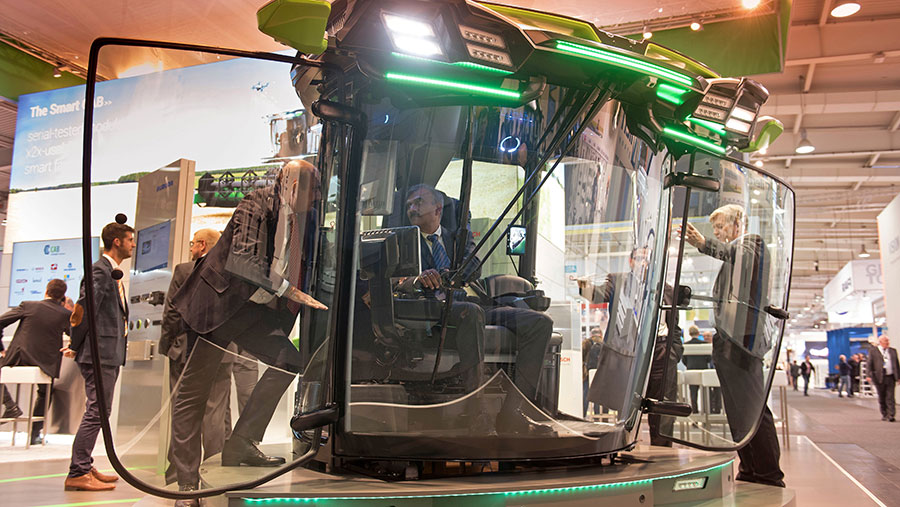 In the not-too-distant future, cabs may well look just like this Smart CAB. The CAB Concept Cluster, a collaborative partnership of 13 manufacturers and institutions, presented a study model at the Agritechnica trade fair.

The Smart CAB project requires a little explanation, because its creators are not expecting to sell the Smart CAB as a whole to a large OEM in the coming year.

The actual purpose of it is to integrate their many innovations into a single prototype and cleverly promote them in the hope that an OEM will in fact adopt one or more components. The Smart CAB was built with self-propelled sprayers and harvesters and combine harvesters in mind.

Each member of the CAB Concept Cluster (CCC) focused on its specialism, and some took the opportunity to integrate innovations, such as the auto-dimming lights by Hella.

When you sit down in the climate-controlled massage seat, the first thing you notice is that there is no steering wheel. The CCC believes that a conventional steering wheel and steering column impedes the view of the feed (of a cutter or combine), which is why the steering wheel has been replaced with a rotary knob in the left arm-rest.

There are five different screens, consisting of two operator touchscreens and three camera displays, plus separate operating units for climate control and similar features. The CCC says it has implemented all possibilities of displaying information in this study model for demonstration purposes.

It has also made connectivity a priority: a smartphone, drone, the cloud and the machinery itself are all connected to one another.

The project team has a view that in the future, a drone will constantly hover over the cab, which will recognise hazards (such as game) and provide a broad view all around the machinery on the terminal, while simultaneously scanning the crop.

Hella has incorporated yet more smart technologies in the lighting – for example, the Smart CAB is equipped with a sensor that measures reflection of light. The LED lights will dim automatically if the driver of an oncoming vehicle or another machine is being dazzled.

The lighting also ‘notices’ if it is dazzling the driver when material is being blown around. All LED lights switch on and off individually. Finally, the lighting can be used as a means of communication, by projecting symbols or warnings onto the ground. So you could, for example, instruct a tipper truck travelling alongside you.

The CAB Concept Cluster (CCC) is a project team composed of renowned manufacturers, suppliers and institutions, which was established in 2014. The team members combine their innovations into a single project in order to demonstrate them, and one example they built earlier was a concept cabin for earth-moving machinery. The CCC incorporated all manner of innovations into the Smart CAB that are suitable for agricultural machinery. The following manufacturers and institutions have been involved: