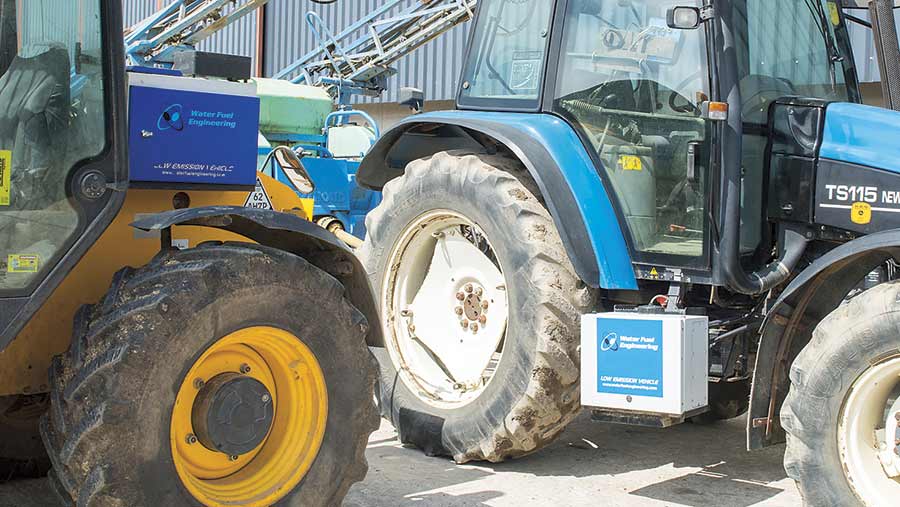 Bus and bin lorry technology is being used on an Aberdeenshire farm to shave 20% off its red diesel bill and eke extra power from existing machines without tampering with the engine.

The retrofit hydrogen electrolyser comes as a bolt-on, suitcase-sized box and can be plumbed into the air intake on pretty much any vehicle, including tractors, telehandlers and 4x4s.

It uses basic physics to split distilled water into its constituent parts – oxygen and hydrogen – by running an electric current through it via two probes. This oxyhydrogen is then fed into the intake alongside the standard flow to alter the characteristics of the air in the combustion chamber.

In doing so, it produces a cleaner and quicker combustive explosion that has been proven to cut nasty emissions by more than 80%.

This isn’t enough to provide a sole source of power on its own – it has to run alongside a standard diesel (or petrol) combustion engine – but, because the hydrolysis process happens on the move, there’s no need to organise storage or transportation of the second fuel.

Dave and Nicola Barron were the first farmers in the UK to fit the system to an agricultural vehicle.

Their family farm at Nether Aden, near Mintlaw, Peterhead, is one of nine businesses taking part in a trial run by the Scottish government looking into the options for reducing agricultural carbon emissions.

Mr Barron first came across the technology on Aberdeen’s bus fleet and felt it offered a good opportunity to significantly reduce emissions caused by his machinery fleet.

But, while the council’s fleet runs on pure hydrogen, the bolt-on system offered by Barnsley-based Water Fuel Engineering is simpler and cheaper because it’s designed to work alongside a conventional engine rather than eliminate its use altogether.

The hydrolyser was fitted to Mr Barron’s JCB telehandler in September last year – and then on his New Holland TS115 tractor a couple of months ago – with grants for the cost supplied by the Scottish government. 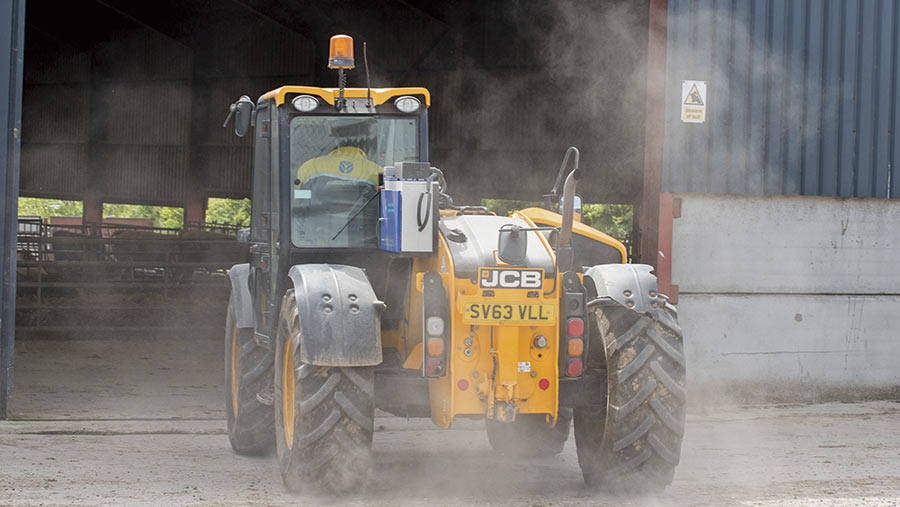 Gas is produced on-the-go, meaning there’s no added responsibility for producing, distributing or storing the hydrogen.

The simple kit mounts on the telehandler’s chassis (just above the hydraulic oil sight glass) and includes an electrolyser, control unit and water reservoir, which must be topped up periodically.

It works by running an electric current through distilled water to produce oxy-hydrogen gas, which is collected in a test tube that can be seen bubbling from the cab. This then filters into the engine’s air intake to supplement the supply of diesel at a rate of about 6%, which, in turn, transforms Mr Barron’s run-of-the-mill Loadall into a hybrid vehicle.

Adding the gas accelerates the engine’s combustion process, causing a cleaner, faster and more efficient burn of the diesel mixture. This extra efficiency helps to reduce fuel use.

If the box stops working for any reason, the machine will revert to conventional diesel power. 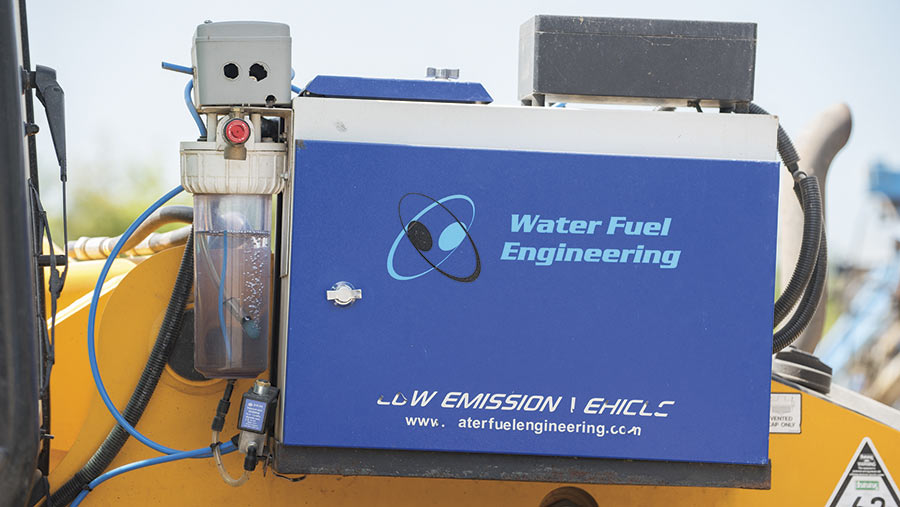 Extensive trials have shown stacks of benefits. The headline figures include fuel savings that have ranged from 11% to 29% and a reduction in emissions of up to 80%.

However, the clean-burning nature of the system means there are other advantages that can add a healthy cost saving to a farm’s annual bill. For instance, diesel particulate filters will need to be replaced less frequently on modern tractors and oil change hours can also be extended.

That’s because mixing oxy-hydrogen with the diesel produces an earlier and more mechanically efficient explosion at the piston. Because of the better burn of the diesel mix there’s also an argument that engines with the system fitted will no longer need AdBlue additive.

Mr Barron saw fuel use on his JCB drop from 6.84 litres/hour to 5.92 litres/hour after the kit had been fitted.

This equates to a 13.5% fuel saving, though it is expected to get closer to 25% as the company has since increased the electrical current being used to produce the hydrogen, which, in turn, will improve diesel efficiency.

And with the farm’s telehandler clocking up around 1,000 hours/year – a 920-litre fuel saving – he will trim at least £500/year from his red diesel bill. And if AdBlue is removed it would cut another £500 from the farm’s annual running costs.

Mr Barron also reports a noticeable increase in usable power, which has meant increasing working speeds and less time spent in the field.

Making the bills stack up

The major stumbling block for most interested parties is likely to be the price.

The Scottish government stumped up £7,500 for Mr Barron’s first kit (he paid for the second himself), but Water Fuel Engineering has since altered its pricing to make the system more accessible for other farmers by structuring it to match the potential fuel savings.

It can now be retrofitted to any tractor or loader for about £1,500 followed by monthly fees of £110, which the company says should still allow farmers to benefit financially from the fuel savings.

The kit has a life expectancy of 20 years and has since been fitted to a Land Rover Defender in Aberdeenshire, which is now achieving 24% fuel savings on white diesel.

Investment costs are also tiny compared to a full switch to hydrogen power. Hydrogen fuel costs about £10/litre and the machines are very expensive to buy, plus the fuel tanks are heavy and the fuel must be stored carefully.

Farming for a Better Climate initiative

Dave and Nicola Barron are taking part in a Scottish government-backed scheme that encourages farmers to consider their carbon footprint.

The programme has been running for six years and currently has nine focus farms dotted around Scotland. Each farm is carbon audited and is encouraged to trial new farming systems and monitor the effect they have on efficiency and profitability.

Fitting the JCB’s hydrolyser was just one of the initiatives Mr Barron has integrated into his mixed farming system.

He has also increased his spring cropping area to cut fertiliser use, aims to dry all of his grain in a carbon-neutral fashion using a biomass boiler and solar power and has incorporated green manures into his cropping plans.

He is also keen to explore the potential of storing hydrogen gas as part of a farming co-operative. 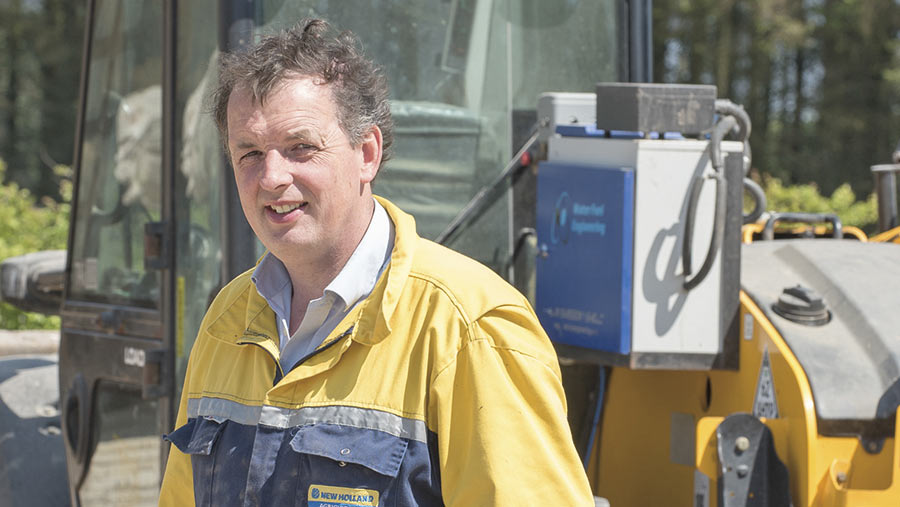