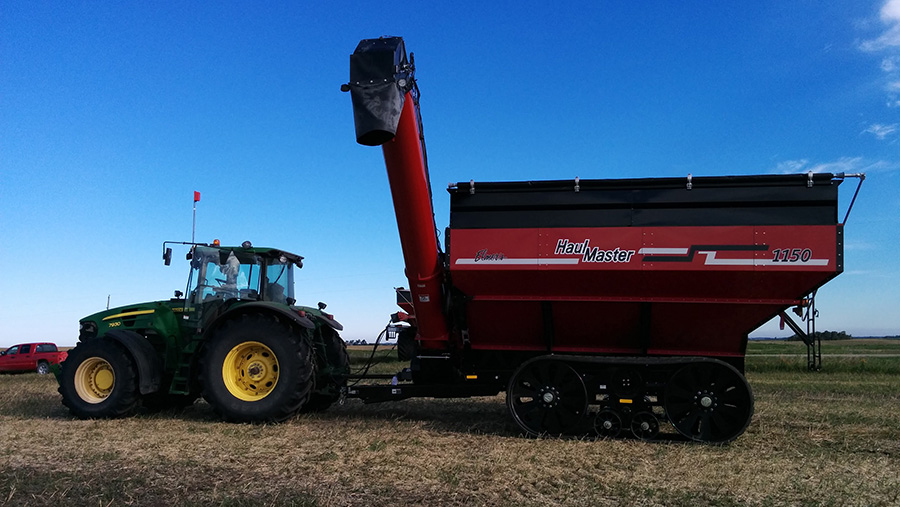 Despite having no background in computer software, farmer Matt Reimer, based in Manitoba, Canada, has managed to rig up an autosteer system that allows his 220hp John Deere 7930 and 24t grain cart to drive itself to and from the combine without anyone in the cab.

This nifty, labour-saving project is indicative of farmers’ growing confidence to self-build GPS systems that are much cheaper than off-the-shelf options or can provide something that’s not currently available on the market.

Broad-acre autonomy of this type remains pretty sparse, not because it is difficult to develop but due to the civil liability associated with leaving high-horsepower machinery to operate without a driver.

That has left the door open to have-a-go farmers, many of whom are using open-source computer programmes as their starting point.

This free-to-use software provides basic GPS programming and, with very little altering, allows users to wire it to a GPS receiver to get basic guidance through a standard tablet computer.

The beauty of open source is that it can be adapted to all sorts of autonomous tasks and gave Mr Reimer the software navigation algorithms he needed to make a start on his own driverless system.

During the course of a winter he managed to merge GPS receivers, controllers and a mass of wiring loom that made it possible to call the waiting tractor to his Claas Lexion 780 combine whenever he’s ready to unload.

“Grain carting is one of the easiest places to get started with driverless tractors as there’s no need for loads of sensors and it can always be monitored from the combine,” says Mr Reimer.

His first attempt was a fairly Heath Robinson setup that used lots of little actuators to move the necessary controls.

However, with a bit more fiddling he has been able to intervene between the tractor’s switches/levers and its Canbus system, instead routing the information through his Pixhawk controller so that he can send his own signal to the Canbus without having to touch any buttons in the tractor cab.

This saved him the laborious task of tapping into the tractor’s management software and deciphering the data it carries through a painstaking process of elimination, most of which he doesn’t need to tamper with anyway.

The first part of the driverless puzzle is provided by an autopilot system typically found on remote control aeroplanes. The run-of-the-mill hardware is built by a company called Pixhawk and, like most of the components involved, can be found pretty cheaply online or at electronic parts stores.

The Pixhawk controller takes information from an Arduino minicomputer to direct the tractor to particular GPS co-ordinates. For this, Mr Reimer sets one position at the side of the field to meet the artic trailer and the other is provided by the combine’s constantly-updating guidance system.

It doesn’t matter what type of guidance system it’s coupled with, provided the receiver sends its information in a form called NMEA, which is a pretty standard GPS positioning language.

“The degree of accuracy simply comes down to the receiver used – RTK or Egnos are both fine – but both need to provide the same correction signals, otherwise it gives goofy results,” says Mr Reimer.

Obviously, grain carting is a pretty simple task, with two clear destinations (the combine and the waiting artic), so the system doesn’t need to process stacks of information and make particularly clever decisions on how to get there.

The Pixhawk controller talks to a Cincoze tablet in the combine cab via long-range Wi-Fi and the information is displayed through a fairly simple app he developed. This allows him to call the tractor over and manually control its speed on a sliding button from the combine.

It positions itself with the auger spout dangling directly above the middle of the trailer. The tractor can then be set to run at a constant forward speed, allowing the combine driver to speed up or slow down to fill different parts of the trailer.

The tractor lies waiting at the side of the field (engine on) until it is sent a signal from the combine driver to say that it’s ready to unload.

Once given the nod, it sets off at creeping speed until it is told via the tablet computer in the combine cab that it can speed up. This is pretty simple to manage as the tractor has a CVT gearbox and is near-impossible to stall – things get trickier where gear shifts are involved.

Once it gets close to the combine, the two machines run at the same speed. Mr Reimer then manually slows the tractor’s speed slightly, giving him the flexibility to go faster/slower in the combine to get an even fill. It’s also possible to nudge the tractor and trailer left or right by 50cm to help fill all the corners.

It then trundles back to the edge of the field, where the lorry driver has to hop into the tractor’s cab to set the pto-powered offload auger going.

The 7930 carries a flashing light and beeper on top of the cab to indicate that it’s active and on the move, and all of the team carry remote controls around their neck with a kill switch safety button. This stops any signals reaching the autopilot system and, in doing so, brings it to an immediate halt.

Similarly, if the radio in the tractor that connects it to the combine loses contact or goes out of its 2km range then the tractor immediately stops, and there’s a stop button on the controller app, too.

The system is pretty simple in that it doesn’t interfere directly with the tractor’s Canbus. That means it can’t select a gear or do anything related to the tractor’s hydraulics, though there are farmers in the US that have managed to develop similar arrangements that run on powershift tractors.

“The only reason to get into the Canbus is to commercialise the project, which I’m not interested in doing,” says Mr Reimer.

“However, the system taken from toy aeroplanes is now a bit outdated. New hardware is constantly being developed and the latest stuff has a much greater capacity to store and process information.”

This extra memory could be useful in providing the system with more intelligence, which is necessary if the corn cart has to communicate with several combines or pick a more complicated path across the field that avoids hazards such as water or telegraph poles.

“My plan is to map hazards and areas where the combine hasn’t gone to avoid it flattening the standing crop. Maybe a collision sensor on the front to detect any obstacles would be useful too, and a smartphone app so that the truck driver can fire up the chaser bin’s pto from his phone rather than getting in the cab.”

Can I build something similar?

Anyone interested can make use of Mr Reimer’s software as it’s available free of charge – you can find it by googling Matt D Reimer Github where there’s a rough step-by-step guide.

Commercial companies are also muscling in on the scene. Iowa-based SmartAg has its AutoCart close to production, which does a similar job to Mr Reimer’s tractor, albeit with a few more features.

For anyone who wants to learn more about AgOpenGPS, there are extensive conversations on the North-American Combine Forum.

Canadian farmer Brian Tischler, based in Mannville, Alberta, leads many of the discussions. He developed the original software and others, including Matt Reimer, have contributed.

The programme itself is hosted in an online repository called Github and is free for anyone to download and play around with to suit their needs.

The beauty of open source software is that it can be gradually tweaked and updated.

This software is primarily for home-builders – using it to develop commercial projects isn’t considered to be in the spirit of sharing information and helping others.

Other farmers we have featured in Farmers Weekly have used the software, including Charles Quick from Taunton, Somerset, with his RTK auto-steer system that cost just £1,200 to build with no ongoing subscription fees.