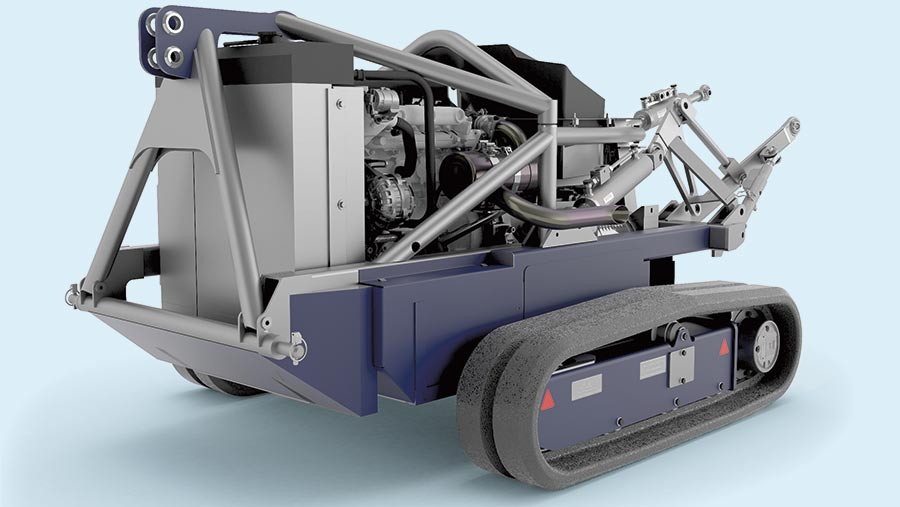 An Oxfordshire-based autonomous robotics company has developed a driverless tractor which is set to undergo its first major phase of on-farm testing in March ahead of a wide release within two years.

Central to the Dynium Robot’s high-tech system is a combination of computer vision and light detection and ranging (Lidar) navigation software (used to create high-resolution maps by measuring the speed of laser reflections and wavelengths) to reduce the reliance on sometimes-patchy global navigation satellite system signal in keeping the machine on track.

The combination of high-resolution 3D sensors and smaller, low-cost Lidars produces models of the surrounding environment and maintains a precise understanding of the robot’s real-time position.

It also carries clever vision systems that can detect obstacles to avoid collisions.

That’s all well and good, but the company is also trying to gear the robot up for proper farm work.

To that end, it uses a standard three-point linkage with a bell crank to lower the vehicle’s centre of gravity to improve the payload limit and allow 360deg Lidar visibility of the linkage and implement.

The hitch arrangement was developed with GKN Walterscheid and means it can carry traditional farm implements such as ploughs, mowers and sprayers.

The idea is the robot will become a platform for traditional farm implements, but can also carry more unusual tools made by other companies, including precision sprayers, smart sensors and dextrous hands.

To maximise its flexibility it has the capacity to run a 540-speed pto and has a block of hydraulic couplings.

Power comes from a 59hp Hatz diesel engine able to provide high torque from its modest size and weight, but the powertrain is also future-proofed for electrification. It runs through a hydrostatic transmission.

The overall weight of the machine is about 1.35t to minimise soil damage as a result of compaction. Options include a tracked undercarriage or wheeled versions.

Cleverly, the company has also made it suitable for contractors and farmers with blocks of land spread far and wide as the robot can be picked up with a regular tractor’s three-point linkage for shifting along the road.

It is designed primarily for high-value orchard, hops and polytunnel farming.

The tractor has been built as part of the government’s Innovate UK grant, which is offering cash support to businesses to realise the potential of new technologies, develop ideas and make them a commercial success.

Since 2007, Innovate UK has committed over £1.8bn to the programme, supported by a similar figure from partner and business funding. Dynium Robot is one of 8,000 organisations with projects to receive support, which has been estimated to have added more than £16b to the UK economy and created nearly 70,000 jobs.

The company reckons its invention will go some way to solving the expected labour crisis caused by the Brexit vote and is keen to gets the machine on sale within two years.