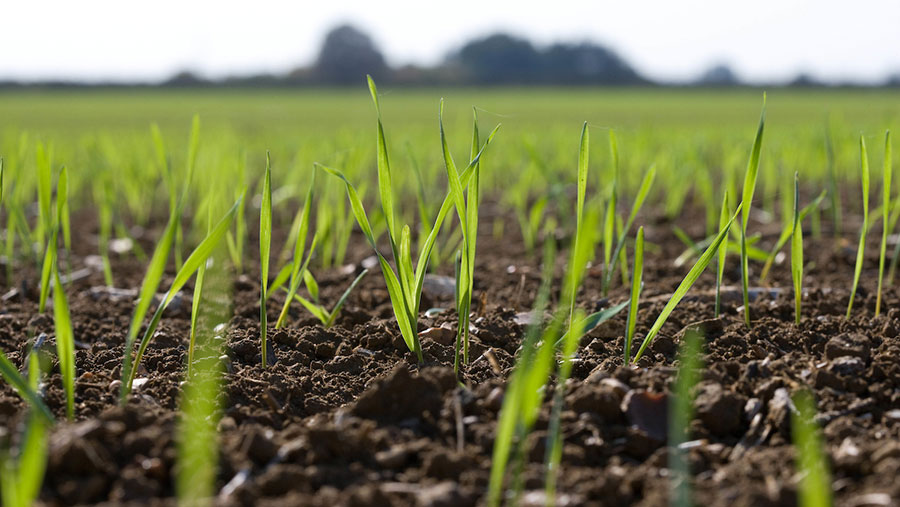 Soil degradation across the world is costing agriculture average losses estimated at 1.5mm/year on conventionally managed farms and how to reverse this trend is key to the future of farming.

Farmers following those regenerative practices are finding they use much less diesel and other inputs, and generally yields increase slightly, making them more profitable.

Mr Montgomery believes there is huge potential for agri-tech to contribute to the success of these practices, one example being through a better understanding of soil microbial life.

See also: How arable data analytics could counteract the loss of BPS

Several organisations across the UK are currently researching such technology.

The Essex Plant Innovation Centre at the University of Essex is researching such technology. Alex Dumbrell from the centre is analysing microbial life in soils using DNA barcoding.

His aim is to identify beneficial and negative interactions between soil biological communities to see which plants would benefit.

Through this information they hope to be able to make stronger recommendations about which crops will grow well in a particular soil before planting, improving rotations.

Giles Oldroyd, who is director of the NIAB/Cambridge Centre for Crop Science, is also studying soil biology, specifically arbuscular mycorrhizal fungi, to improve nutrient acquisition by crop plants and avoid the need for synthetic fertiliser. A long-term aim is to engineer nitrogen-fixing cereals.

Tunbridge Wells-based Harvest Agri is developing a real-time, low-cost test for measuring microbial biomass and the fungal-to-bacteria ratio in soils.

The company says its microBiometer test takes just 20 minutes, costs around £12/test and can be carried out anywhere.

Suffolk-based Soil Moisture Sense and Dutch firms Farm21 and RMA offer soil moisture probes, with the primary application to help with irrigation scheduling. These probes can typically be linked to weather stations for other applications, such as disease prediction.

Its Mark product, which looks like a frisbee mounted on a pole in the field scans the crop below helping to monitor for plant growth and early signs of pests or diseases.

That data can be used to accelerate the creation of decision support systems, explains Adam Wolf, chief scientist at Arable. “We’re working with NIAB in potatoes and have a partnership with BASF’s Xarvio helping to time spray applications in cereals.”

Plant pheromones and essential oils are being developed as potential alternatives to insecticides.

With insecticides under regulatory, resistance and societal pressure, the use of pheromones will help make chemical use smarter in the future, suggests Daniel Bahia, business manager and co-founder of Pherosyn, a start-up spun out of Rothamsted Research.

Pheromone traps situated in fields will attract pests to give growers a better understanding of when crops need treating, he explains. Pheromones for pea midge, saddle gall midge and orange wheat blossom midge are the first ones to be launched.

Botanical biopesticides, based on chemicals extracted from plants, are being investigated by Joe Roberts at Harper Adams University for their potential to control aphids.

“These essential oils are defence compounds produced by plants when they are under attack, and we can exploit this by applying them to crops to reduce pest populations, or alter insect behaviour by repelling pests or attracting beneficials to speed up biological control,” he explains.

“We’re moving to a world where oil and plastics will not be connected,” explains Simon Hombersley, CEO of Xampla. “And the replacement will be plants. For farmers there is a huge opportunity coming from the transition away from fossil fuel-derived materials to plant-based materials.

Xampla makes plastics from plant protein. It takes pea or soya protein as a powder and through a process developed at the University of Cambridge engineers that material to make plastics, which can replace microplastics, films and packaging.

“Second, you need to make materials that function in application, and then at the end of the life of the material something that naturally degrades in the environment, needs no chemical recycling and is home compostable, and that’s what we have developed.”

The launch markets from the company, which is backed by Sky Ocean Ventures among others, are for the microcapsules containing fragrance in clothes, which get washed out ultimately into the oceans.

“We can make the same capsule made solely out of plant protein, which when it reaches the ocean will be eaten by microbes or fish. Another potential market could be seed coatings, as well as films for food packaging.”

Mr Hombersley acknowledges the firm needs to develop more understanding of how a future supply chain would work. “Could we take waste crops and turn them into plastics working with farmers as part of the value chain?

His long-term vision is to take crops grown locally, process it locally into plastic, and then use as seed coatings or packaging in the agricultural supply chain and then compost it locally. “That is true sustainability and what we are searching for,” he says.

Professor David Montgomery was the keynote speaker at the recent Agri-TechE’s REAP 2020 Conference. All other speakers also presented, or are with companies that exhibited at the online Conference.