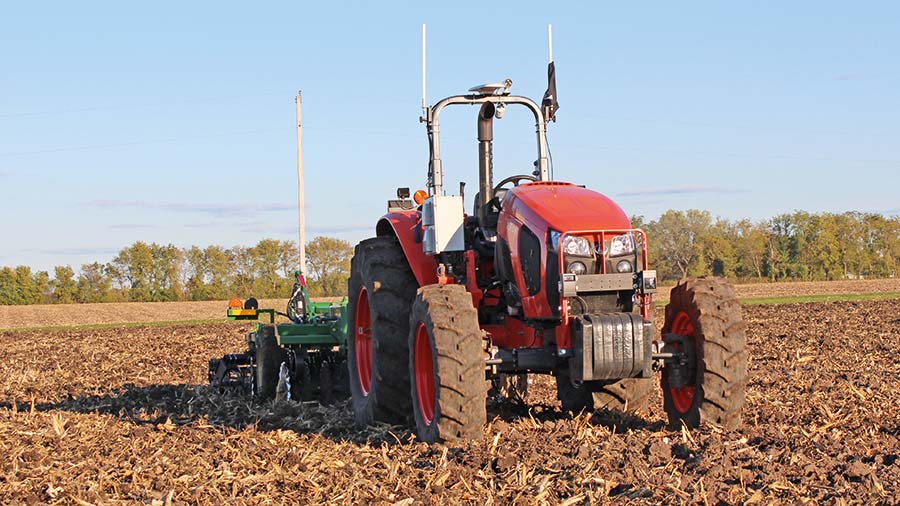 Plenty of manufacturers have had a stab at building a driverless tractor – Case-IH has one based on a Magnum, Kubota’s attempt is a quirky-looking tracked contraption and John Deere has a futuristic electric concept that develops more than 600hp.

Some of these have been seen parading around the odd demo plot, but none are out doing proper work on real farms.

They’ve all been pipped to the post by a Chicago-based electronics engineer who has built a fleet of low-cost autonomous tractors using off-the-shelf components and put them straight into the field.

Craig Rupp grew up on a farm in Iowa and started his career as an engineer for Motorola.

Since then, he has turned his focus back to agriculture, developing the Starfire GPS receiver for John Deere and Fieldview Drive, which has proved popular in the US.

This nifty device gathers data from any brand of agricultural machine and sends it via Bluetooth to be viewed on a phone or tablet.

His experience in agricultural technology means he spends a considerable amount of time dealing with large row crop (arable) farmers in the Midwest and he frequently hears of their struggles to find labour.

Convinced that automated tractors could provide the solution, he formed a new company, Sabanto, and set about building a machine that could operate without a driver on the seat.

Mr Rupp and a team of engineers started building their system in late 2018 and by spring 2019 they had their first prototype up and running.

Rather than going to the trouble of building a bespoke driverless tractor, they attached their system to a leased 220hp JCB Fastrac 4220, coupled to a top-of-the-range 18-row precision planter from Harvest International.

This approach offered a number of benefits: they were starting with a proven machine that could be serviced by any dealer, driven conventionally when required, and returned at the end of the lease agreement as with any other tractor.

It was also fairly compact compared with most tractors in the Midwest, making it easy to transport on an artic lorry without a wide-load permit.

That season, the outfit planted hundreds of acres of soya beans across Iowa, Nebraska, Minnesota, Indiana and Illinois without anyone on the seat.

Most of the tractor’s functions were automated, but a team of operators was on site to monitor its progress and make adjustments to the planter.

Since then, the operation has been downsized to smaller, lower-cost tractors from which the team is concentrating on squeezing every ounce of potential.

“Essentially, I’m trying to cut the capital and operating expenses out of agriculture,” says Mr Rupp. “I think we’ve peaked in horsepower and, as autonomy is introduced, you’re going to see smaller machines and implements that work 24 hours a day.”

The software has also improved since that first season, allowing more of the functions to be automated and the monitoring to become less intense.

However, it’s still a highly technical operation, so rather than selling these systems to farmers, Mr Rupp has decided to set up his own contracting outfit with a team of specialists to keep the tractors running and fix any problems. 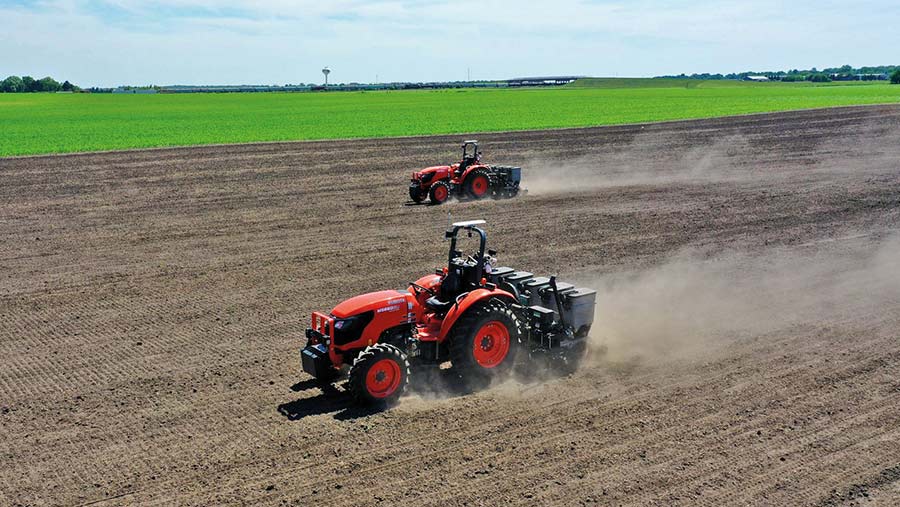 “There are a lot of brands to choose from, they are really reliable and there are dealers all over the place to sort any problems,” says Mr Rupp.

Each 60hp Kubota is capable of planting 50ha in 24 hours, using four- or five-row Harvest International precision planters set at 20in or 30in spacings.

These are still high-spec machines, with the same functions as the 18-row model used on the first JCB prototype.

By improving efficiency, they hope to be able to increase output to 65ha in 24 hours, which is the average field size in the area, known as a quarter section.

The plan is to turn up at 7am, set up a single tractor and planter and come back at 7am the next day when the field is finished.

“I could probably do this straight away with our 90hp models, but I kind of fell in love with the little 60hp tractors and I want to get as much out of them as I can,” he says.

The Sabanto system means the tractors are also capable of continuous running, only needing to stop for seed, fuel and maintenance. The longest stint one tractor has worked so far is 39 hours. 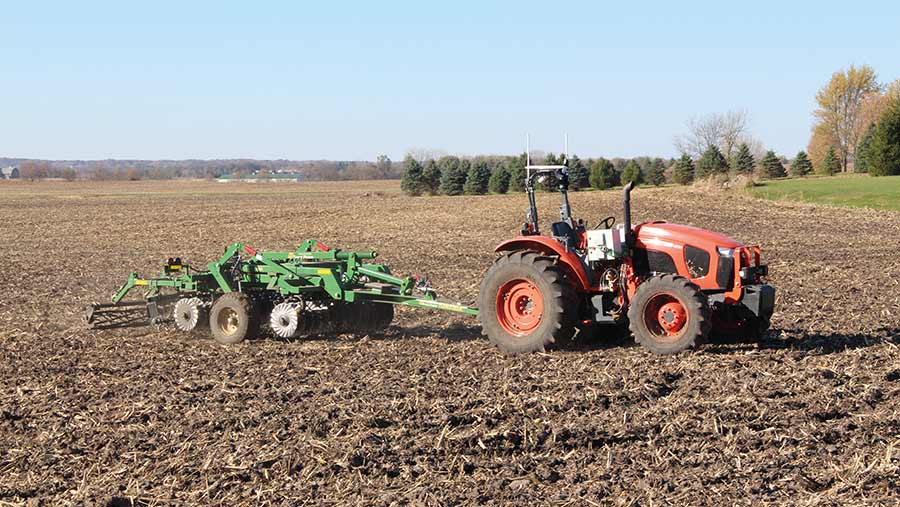 Each tractor is fully automated, and once setup is complete it can work with minimal input from the support team.

The process starts with an operator driving around the outside of a field to establish a boundary and noting any obstacles to be avoided.

The tractors have sensors that cause them to stop if they encounter anything out of the ordinary, but by putting this information into the navigation system they can keep working without interruption.

One or two field operatives can handle setup and fuelling for multiple machines and the technical team can monitor them remotely from any location.

For longer stints, these technicians work eight-hour shifts and use a combination of sensors and cameras to pinpoint any problems.

The tractors have sensors to bring them to a stop if a person gets close and there are remote kill switches if they lose control of a machine.

The beauty of the Sabanto setup is that it only uses off-the-shelf components.

This includes a dual-antenna GPS receiver that can engage from a standstill (single versions require the tractor to be moving), a hydraulic steering valve and connection to an existing RTK network.

By tapping into the Canbus wiring system – one of Mr Rupp’s particular areas of expertise – the team is able to operate the tractors remotely without making any major modifications.

This process also allows them to harvest information such as speed, fuel use and linkage position.

At present, the team is still monitoring and adjusting implements remotely via cameras. However, they are busy working on auto-detection systems that will eventually remove this requirement.

Sabanto is already operating as a bona fide, fully insured contracting business across a number of states.

However, Mr Rupp has big plans to expand the operation, covering a large portion of North America and further afield. Europe and the UK are also on his radar.

“One thing I like about the European market is that it’s well suited to smaller tractors – you’ll definitely see us, sooner than you might think.”

Initially, the firm will continue expanding its arable tractor-based operations, working to improve the software and make it more reliable.

But plans are afoot to add additional operations and the team is looking at cost-effective ways of automating harvest.

The focus on compact tractors would also make it easier to incorporate battery-powered tractors.

“If someone offers a suitable machine, I will evaluate it and if the economies are right, I will use it,” he says. 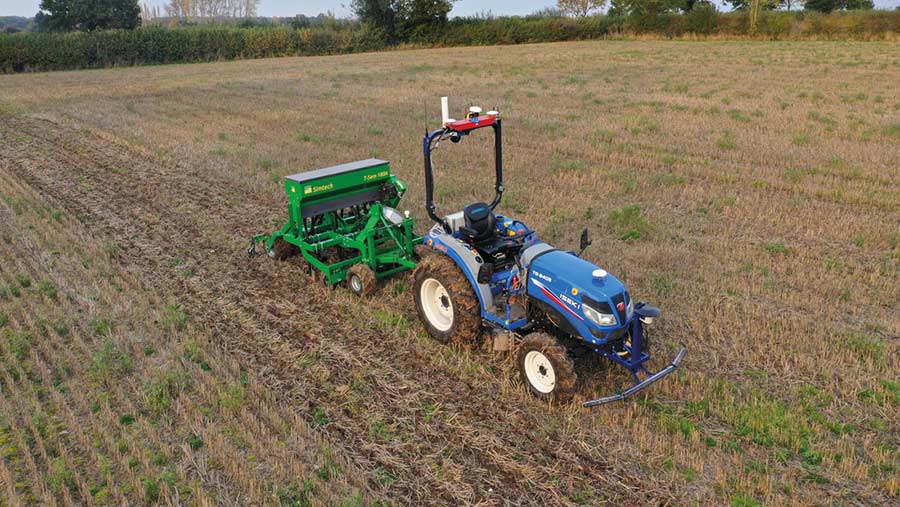 Harper Adams University has partnered with Precision Decisions and Farmscan Ag to bring automation of arable farming operations to a commercial scale.

The Hands Free Farm venture is an extension the organisation’s Hands Free Hectare project, which sees a team of specialists carry out all operations on a 35ha plot from seeding to harvest without an operator on the seat.

The team is refining its systems and software, adding the ability to plant headlands, avoid obstacles and harvest more efficiently.