The US Farm Progress Show is a staple part of the North American machinery calendar and welcomes punters from across the globe.

But no sooner had it opened its doors for 2018 than a biblical storm swept across the Midwest, giving the event organisers no option but to shut down for the day and start a scramble for punters to get off the field car park quickly.

Fortunately, the show reopened for the following two days in much better weather, although field demonstrations were cancelled. Apart from the size, the biggest difference to UK shows is having to dodge the UTVs tearing around the showground, ferrying people from stand to stand or to the demo areas.

We’ve picked out a few of the best bits from the huge event.

‘Helping farmers to produce more’ is the drive for Precision Planting, which supplies a range of high tech equipment to farmers and manufacturers to improve the uniformity of drilling.

The jewel in the crown of the firm’s offering is the Smart Firmer, which is a small, angled leg – similar to a hockey stick – that attaches behind the drill coulter to apply light pressure. This forces the seed into the furrow, helping to achieve better seed-to-soil contact and consistent emergence.

It also has a bank of sensors on its foot, relaying information directly to the 20/20 monitor in the cab for the operator to make on-the-go decisions.

In front of the coulter and disc unit is the Clean Sweep, which clears trash and debris to prevent it contaminating the drilling area. The sensors on the foot can detect if there are unwanted objects or plants getting into the furrow and will notify the operator as a percentage readout.

Along with keeping the seed trench clean, another sensor measures soil moisture and provides a second percentage reading. This creates a map indicating how even it is across the field, highlighting areas that may be slower to emerge due to moisture deficiency before the seed has even had the chance to chit. 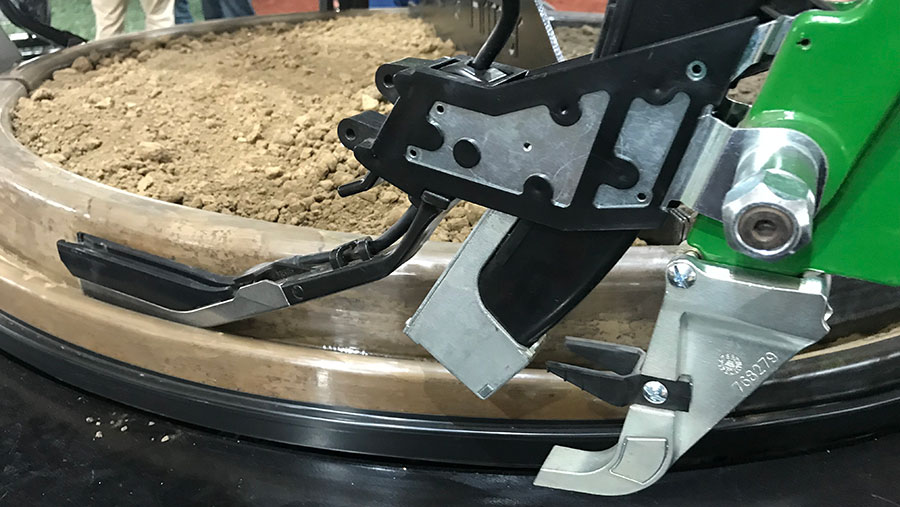 Using this information means more seed is drilled in the areas when the soil has the potential for greater yield. Conversely, seed isn’t wasted in low-yielding parts of the field. The sensors send over 1,000 measurements per second back to the operator and map the field constantly.

Along with the Smart Firmer, the company has technology for liquid fertiliser application around corners and seed depth control linked to the depth wheel – rather than using a constant pressure – which can drop seeds to different depths if soils are wetter.

Precision Planting sells into America, Canada, Brazil and most recently France, so don’t be surprised to see this technology creeping into the UK soon.  However, its preferred route to market would be to allow customers to spec its technology onto drills at manufacturing stage, without invalidating warranties and avoiding retrofit complications.

Just like the UK, farmers in the US are realising that not all soils appreciate cultivation activity and zero till is becoming an increasingly popular establishment technique.

Kansas-based Ag Synergy has been making drills and related products since 2010 and on its stand in Iowa this year was a mini tracked coulter unit. Designed for use in light, low-moisture soils or drilling straight into heavy cover crops, the track units lift up and down in the same way a standard toolbar would.

The tracks are made up of two separate rubbers with space in the middle for the disc and coulter. The tracks are unpowered and are driven by friction so require a minimum of 20hp per unit to pull. 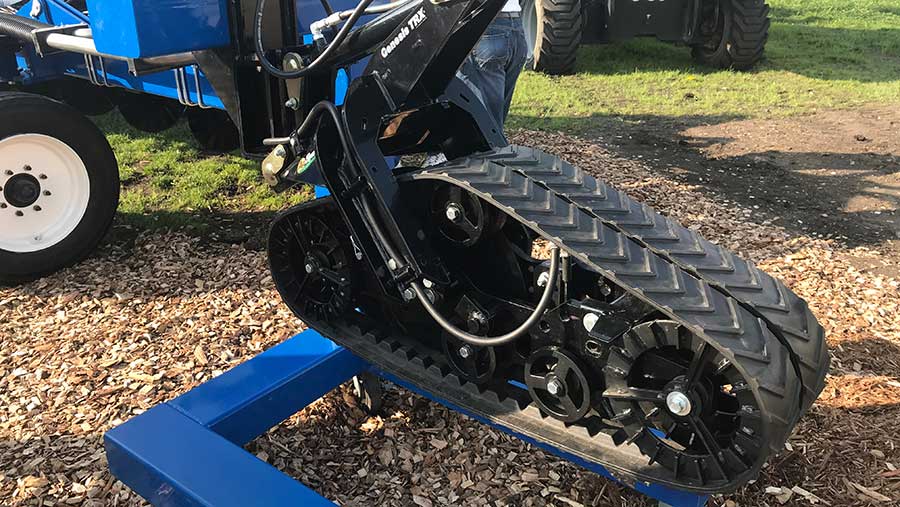 Once lowered, the Genesis TRX can apply a huge 540kg of pressure to keep the coulter in the ground, which the firm says is the biggest challenge to stop the units bouncing around as they are individual and free to roam over ground contours.

These units are specifically for unmoved soil as cultivated land would bung up the track units and create a smearing effect. The straight disc helps to move minimal soil when drilling and the units have lateral movement of 5° to help with headland bends.

With its own demo area, 360 Yield Centre was showing growers how they can maximise returns from crops with nifty machine modifications.

Along with a large John Deere R4050i self-propelled sprayer with dribble bars capable of accurately applying nitrogen to the base of a maize plant by dropping it through the canopy, there was a JD Gator with a long rod sticking out from its nose.

On the rear sits a 1,100-litre tank on the 360 Sprint Gator that was filled with liquid fertiliser and acts as a refuelling vessel to keep the maize drill running in the field. 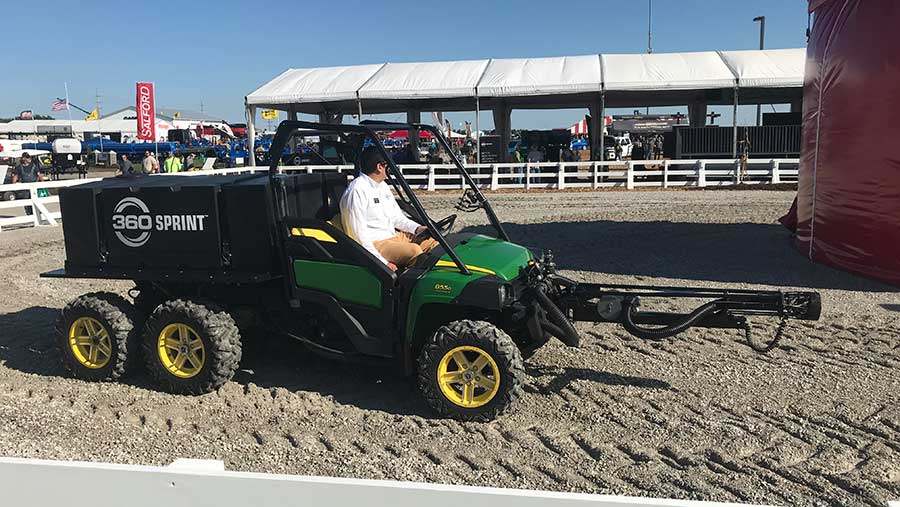 Driving up to the rear coupling on one side of the drill, the 360 Sprint has powerful electromagnets that snap into action and lock the hose to the drill. The 2in supply can unload the 1,100 litres in under 2 minutes, with the power coming from an onboard Honda engine on the Gator.

The Gator has received an extra axle and some beefed-up supports to accommodate the large tank, but it can still be returned to its original mode as there are no mods to the chassis.

This helps to keep the drill in the field and can also reduce weight as it doesn’t have to run brim-full with fertiliser, thus reducing compaction and offering up to 30% increase in output.

Spreading granular fertiliser accurately to 36m is as much dependent on the quality of fertiliser as the machine that is scattering it.

But Ontario-based Salford says it has done extensive testing with a variety of different granules from across the US prior to the launch of its new trailed spreader and is confident that most grades of fertiliser will be hurled to a 36m width.

Cleverly, it has 12 sections for auto shut-off managed through a TeeJet rate controller, which monitors the weight in the hopper against the material spread and adjusts the rate as speed varies.

A pan test kit is sold with every machine for farmers to calibrate their own equipment and the spreader is capable of spinning to reduced widths of 24m, with the 12 sections proportionally scaled down to fit the smaller spread.

There is only a PTO connection needed from the tractor because an inbuilt 132-litre hydraulic system powers the spreader, so a tug of 150hp could easily power the spreader on flat ground.

It was hard to miss the enormous Unverferth Equalizer tracks, which provide the footwear for the firm’s monster chaser bin capable of holding 54m cu.

Measuring a whopping 42in wide and 148in long, the new tracks are claimed to be the biggest in North America and each one provides 4,410sq inches in touch with the ground.

The new Equalizer system offers the standard front-to-back pivot of 20° but also has a camber oscillation of 8°, so there is still full contact from the track and minimal digging in from one edge when working on sloped ground or driving along humped roads. 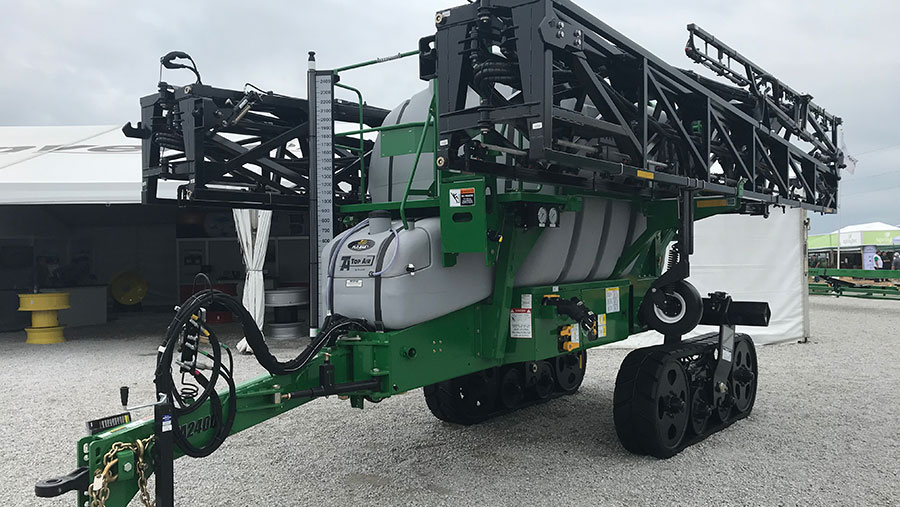 The tracks, in a slightly smaller format, were also on a trailed sprayer unit, with the firm saying these are gaining increased popularity with farmers wishing to tread more lightly – the track replacements can apparently halve the compaction compared with a wheel.

One of the smallest machines on the Unverferth stand was an ATV-towed twin-axle sprayer with 18m booms and a 750-litre tank that had no connection to the quad – instead it uses a static Honda GX 160 engine to power the TeeJet plumbing system.

Draper belt headers might be a rare sight in the UK, but they are still hugely popular in the US. Still, they suffer similar issue with losses along the knife sections as the reel shatters grains from pods before the table catches them.

US manufacturer Crary has developed an air system that has angled tubes that hug the outside of the reel to force wind onto the knife section, thus blowing loose seed onto the belts behind to be ferried into the combine. 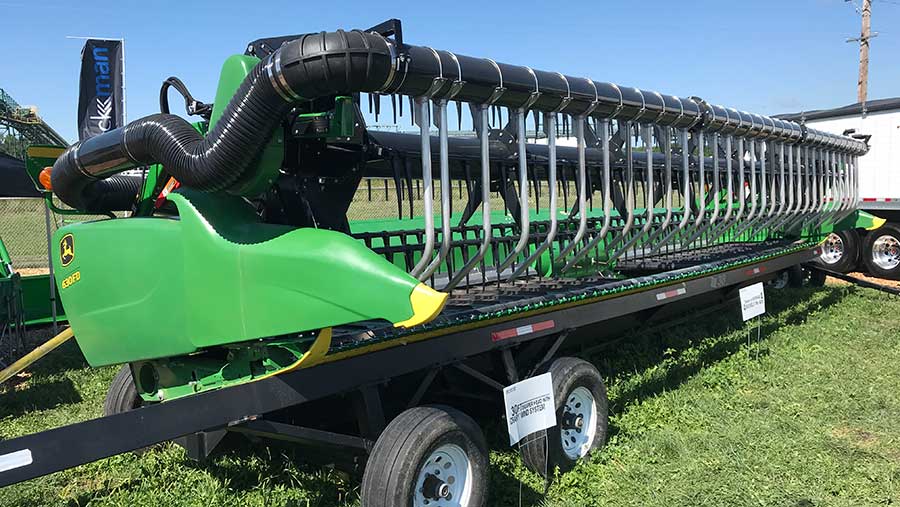 The 8in fan runs from a PTO drive on the opposite side of the feeder house to where a normal header connection attaches.

It was being shown on a 30ft John Deere header and the system, along with air supply tubes, lifts up and down with the reel and doesn’t impact on the workings of the header. The company claims it can offer a saving of up to 0.1t/ac.

Farmers Weekly first covered the self-propelled round baler from Vermeer back in October 2017 when it was in the prototype stage, but it seems the firm’s dreams are now reality and the SP baler has made it into full scale production.

The first five units are due on farms this August, with further models planned for next harvest. Many features remain unchanged from the prototype including the front axle suspension, Claas cab and the Cummins powerplant. 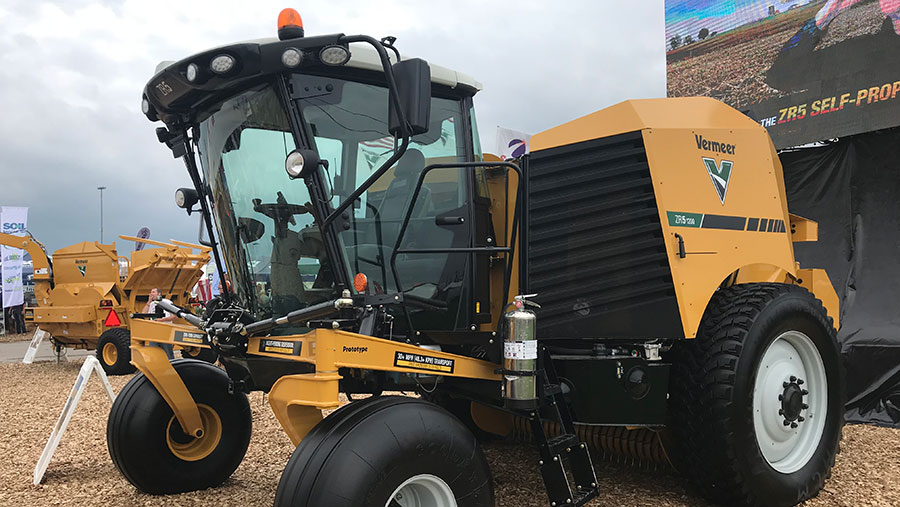 Cleverly, the baler unit can be removed in around 10 minutes for essential maintenance, with the pickup reel remaining in place for fingers to be changed easily, rather than crawling around on the floor. This also means the baler unit can be replaced and a new one can slot into the space without changing the tractor unit as well.

However, the likelihood of it ever coming to the UK or even Europe is a long way off due to the 3.6m road width and 5ft bale chamber. The company says it would be a hefty redesign in order to fit the European systems, and with no UK Vermeer dealers, it seems distribution would be an issue too.

Indian giant Mahindra is slowly adding to its repertoire of products destined for the ag market and the latest item to hit the US dealers is a 1-litre farm buggy.

Mahindra has been selling its UTVs in the States for three years and the new model comes in either petrol or diesel variants and can have a second row of seats if required.

The buggy has some standard features that its competitors charge for, including an electric tipping body and tilting steering wheel. 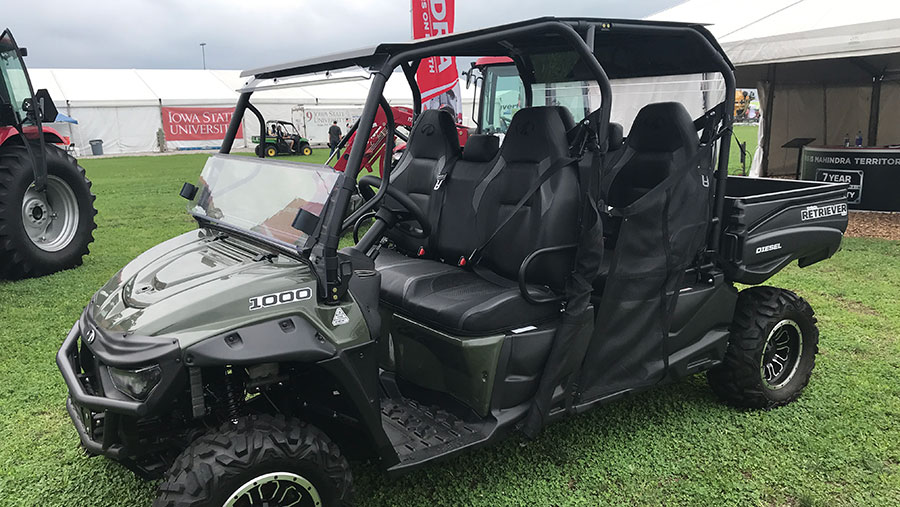 A carrot for any potential buyer will be the standard three-year warranty, which knocks spots off the competition and is unheard of on the buggy market.