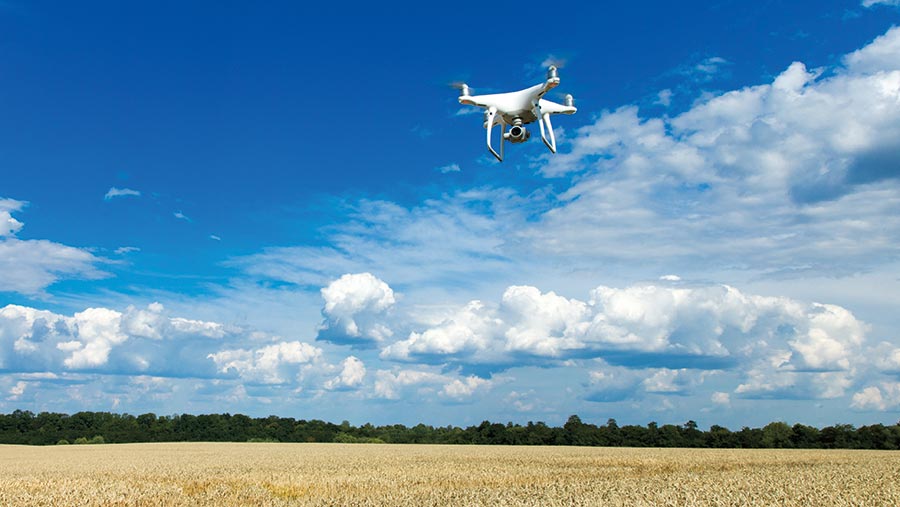 A clampdown against irresponsible drone flights near airports will also affect the proper and beneficial use of the unmanned aerial vehicles (UAVs) in agriculture.

Farmers, agronomists and agri-tech companies will all be affected by new rules as the government seeks to avoid a repeat of the chaos caused by reports of drone sightings at Gatwick days before Christmas. But the government insists only rogue operators are being targeted.

See also: Flying a drone – everything you need to know about staying legal

More than 140,000 passengers’ travel plans were thrown into turmoil as 1,000 flights were disrupted when drones were reported over Gatwick from 19 to 21 December.

Similar reported sightings caused the closure of the runway at Heathrow earlier this month.

It has been illegal to fly a drone above 400ft or within 1km of an airport since last July.

Now the government plans to extend the exclusion zone to 5km – the so-called Air Traffic Zone around airports – with extensions beyond the end of each runway.

Berkshire farmer Colin Rayner, whose fields include land next door to Heathrow airport, says he will be badly affected by the new rules.

“Basically it means that on 50% of our fields we won’t be able to use drones,” he told Farmers Weekly.

At the moment, Mr Rayner employs a drone operator to undertake numerous jobs – including keeping an eye on farm buildings and vehicles, as well as monitoring crops. Drones are essential to his business, he says (see case study).

But from November, all operators of drones weighing between 250g and 20kg will now be required to formally register and complete an online drone pilot competency test (see box).

Aviation minister Liz Sugg said: “Drones have the potential to bring significant benefits and opportunities, but with the speed of technological advancement comes risk – and safety and security must be our top priorities.

“That’s why we are giving the police powers to deal with those using drones irresponsibly. Along with additional safety measures these will help ensure the potential of this technology is harnessed in a responsible and safe way.”

Any restrictions around drone usage could be a problem for some legitimate users, says Mr Goulding. But he believes the new rules will eventually be seen as a blip in their development as UAVs become more popular with farmers.

“What we’re seeing in the news at the moment with their use around the airports is a concern. But we feel that legislation will be relaxed going forward and we believe that the autonomous use of these devices will become fairly mainstream in the future.”

Hummingbird’s services include weed mapping, yield forecasts and the detection of crop stress and disease.

Drones are a valuable way of making farming more efficient and reducing input costs, says Mr Goulding. “Autonomous flying of these machines is a key part of what we are trying to do in making data capture more cost-effective.”

Agronomist Martyn Cox of Blackthorn Arable agrees. Drones are on a par with mobile phones when it comes to making life easier for farmers, he says.

But growers don’t always need sophisticated software to reap their benefits, he adds.

“It is field-walking in another dimension,” says Mr Cox.

“You can get a solution very quickly when you look at something from above. By looking at field patterns, we’ve been able assess the accuracy of fertiliser applications, weeds, crop development and whether wheelings are lining up properly. It literally is an eye in the sky.”

Describing the incidents at Gatwick and Heathrow as incredibly worrying, Mr Cox said the government had to tackle rogue operators.

“They cannot have national airports screwed about so they will probably put more restrictions on where you can fly.”

But he warned: “That won’t stop people from doing it. It is like anything else – new rules to tackle foolhardy action invariably punish the sensible people. The foolhardy people just find another way around them.”

Farmers should check that commercial drone operators are properly qualified, says a UAV owner praised for taking evasive action to avoid a collision with a low-flying RAF fighter jet.

Russ Delaney – himself a former military pilot – set up Uvue Drones after a 27-year career flying helicopters for the Army Air Corps.

He now uses drones to assess crop stress, chlorophyll levels, soil drainage and compaction for farmers and clients such as Bayer CropScience.

The near-miss incident happened last summer when Mr Delaney was carrying out an agricultural survey with a drone within permitted limits at 328ft near Wetheringsett, Suffolk. An RAF Tornado travelling at 517mph came within 72ft of hitting the UAV.

Mr Delaney, who was flying legally, used his military training to avoid a collision by rapidly descending his drone.

He then reported the incident to the UK Airprox Board, which works to improve airspace safety by preventing in-flight collisions.

The Airprox board’s report into the incident recommended that RAF Air Command introduces a system to receive notification of commercial drone operations.

“The drone pilot is to be commended for his prompt action in descending his drone,” it said.

Farmers using a drone company to undertake work on their behalf should make sure the operator is properly insured and has a Permission for Commercial Operations (PfCO) qualification, Mr Delaney told Farmers Weekly.

“They will have been on a course which teaches them about airspace, air law and where they can and cannot fly,” said Mr Delaney. “It is important to make sure you use a properly registered company rather than a hobbyist.” 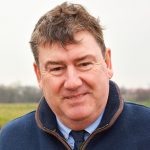 Drones are a vital business tool for Colin Rayner, who farms at Colnbrook, Berkshire, directly below the Heathrow flight path.

Heathrow sees some 1,300 combined take-offs and landings a day – making it one of the world’s busiest two-runway airports.

Mr Rayner’s land includes a field by the Southern Perimeter Road, next to the airport’s southern runway, which is used for both short-haul and long-haul flights.

“We had a drone reported around here – I didn’t see it and no-one else saw it but it shut the airport for an hour,” he says.

“Farming locally, we have enough issues with the weather, crime and a lack of support from police. Now we have drones on top of it.”

Mr Rayner says drones have helped him keep on top of crime by making it easier to monitor farm buildings.

“If they are removed from us, the crime will come back. Our farm has invested tens of thousands of pounds in fencing to keep criminals out and drones help us maintain security.”

Non-commercial drone pilots do not usually require a permission to fly – as long as the aircraft weighs less than 20kg. But they must still abide by rules. The Civil Aviation Authority, which regulates UK airspace, has developed the Drone Code for the safe use of UAVs.