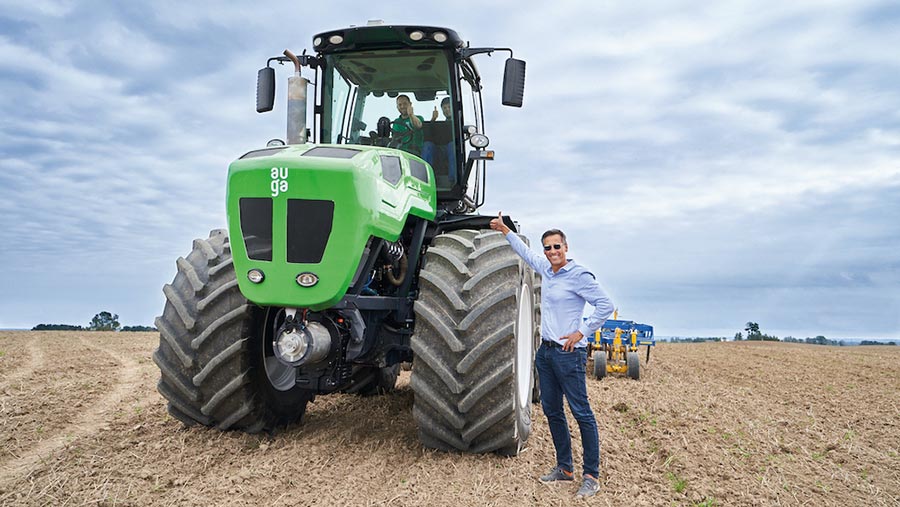 A prototype biomethane tractor from Lithuania appears to have cracked the range concerns of its peers with the ability to put in a 12-hour shift before needing to refuel.

Gas-powered tractors have long been hampered by the fuel’s low density, which means they can only work a few hours at a time, even when festooned with storage tanks.

Auga’s M1 gets around this problem by having a custom chassis that is designed with ample stowage in mind.

In fact, the entire rear end of the tractor is dedicated to this purpose, with a hanger-like bay to accommodate a large biomethane cartridge.

This is sufficient to power the machine for a full day’s work, after which it can be replaced with a fresh unit.

Auga says this removes the need to install an expensive biomethane fuel station at the farm. Instead, cartridges could be exchanged in the same way as workshop gas bottles.

This arrangement has been made possible thanks to the tractor’s novel hybrid drivetrain.

It consists of a small biomethane generator that sends power to electric motors on the wheels, doing away with the need for a space-robbing transmission and mechanical drivetrain.

When the tractor isn’t being worked hard, surplus energy from the generator is stored in batteries ready to be served up later.

Power is more than adequate for most farms, with the motors generating a similar output to that of a 400hp tractor. It also weighs one-third less, so soil compaction is reduced.

The M1 is a bulky beast, stretching to 6m long and standing 4m tall, giving it similar dimensions to a Case IH Quadtrac.

Access to the cab – adapted from a forage harvester – is more of a challenge, though.

It sits atop the cavernous gas storage bay, meaning the driver has to shin up a seven-rung vertical ladder to get there.

Auga, one of largest organic producers in Europe, embarked on the project after carrying out a study into its carbon emissions.

Shocked by the fact that its machinery fleet accounted for 30% of its output, it decided to build a tractor that produced zero emissions. Work started three years ago, with a team of experts drafted in to help.

The tractor will be powered by biomethane captured from the farm’s own slurry lagoons.

This has a twofold benefit – preventing these greenhouse gases from reaching the atmosphere and removing the need to use fossil fuels.

When biomethane is burned in an efficient internal combustion engine, the only emissions are a quantity of carbon equivalent to that absorbed by the grass eaten by the cows, making the process of running the tractor better than carbon net zero.

According to Auga’s calculations, using the M1 in place of a traditional 400hp tractor saves 100t of carbon dioxide emissions a year, which is roughly equivalent to replacing 100 internal combustion cars with electric ones.

More emissions-reducing products are under development, with the firm aiming to make its entire 39,000ha operation carbon neutral by 2030.

It also plans to put the tractor and its other creations into production to help other farmers reduce their emissions.