The countryside has long been hampered by tediously slow internet connections that frustrate residents and businesses alike.

It is a nationally recognised problem and, to address it, the government has pledged £5bn to the Rural Gigabit Connectivity (RGC) programme, working on an “outside in” basis by targeting the hardest to reach 20% of properties in the country and working back towards the towns.

But with mainstream providers often quoting large sums and long wait times to get the necessary infrastructure, there’s a growing number of small businesses focusing specifically on rural internet.

These include Barn (Broadband for the Rural North) in northern England, Gigaclear – which now operates across 22 counties in the South – and Wessex Internet in Dorset.

In 2010, James Gibson Fleming set up Wessex Internet after being quoted a jaw-dropping £120,000 to connect a leased fibre line over a distance of 300m to the farm’s offices in Shroton, Dorset.

Instead, he used a fixed-point wireless radio signal from a property in nearby Shaftesbury to beam line-of-sight internet to his farm, upping the speed from 0.5Mbps (megabits per second) to 50Mbps overnight.

His success prompted neighbouring households and businesses to request the superfast internet supply, and since the first install, his company has erected about 150 wireless masts dotted around Dorset, south Somerset, south Wiltshire and Hampshire.

The business is now run by James’ son, Hector, and still offers the point-to-point service, but has since started building its own cable-based, full fibre network, too.

This can offer speeds well over 100Mbps, is much more reliable and costs about the same as a fixed wireless mast connection – typically about £35/month (excluding the sizeable install fee).

The company laid its first cable in 2014 and now has a 1,600km fibre network, which extends from Lulworth on the Dorset coast, to its most northerly location of Warminster in Wiltshire.

It connects customers using FTTP (fibre to the premises), known as full fibre, which runs straight to the property’s router and opens up the option of gigabit broadband.

This is more than 20 times the speed of FTTC (fibre to the cabinet) – the approach typically taken by the mainstream providers.

FTTC sees the fibre cables installed as far as the roadside cabinet, with the last part of the journey made using existing copper phone lines.

Wessex’s network is connected to two London data centres from its base in Dorset and runs via underground cables to its customers in the surrounding counties.

The company only connects new installations to its private network, rather than using cables owned by another supplier, which gives it full control of its service.

The business also works on a different model to that of Openreach regarding wayleave payments.

Instead of being charged by the landowner to cross and install cables, Wessex Internet negotiates liability-free access across the land to reach communities.

A key point here is that Wessex Internet doesn’t impose obligations on the landowner for maintenance, repairs or re-routing – it undertakes these jobs if the owner requires.

“As farmers ourselves, we understand the concern of accepting a route across your land and then having a permanent restriction on being able to develop that land, or even just cross it with your own private services,” explains Hector Gibson Fleming.

“We want to build trust between ourselves and our host landowners.

“Given our need for free access to make this expensive rural infrastructure build viable, we came up with this balanced agreement, which works well for everyone.”

Unlike urban areas, where there are thousands of houses and business that contribute to the cost of fibre infrastructure, the low population and distance between properties in rural areas has always made installation costs prohibitive.

It inevitably increases the cost per household so, according to Wessex Internet, installs are reliant on roughly 40% of the village properties applying for an RGC voucher and wayleave-free access to the land.

The vouchers reduce install costs for customers and the programme, which is funded by the Department for Digital, Culture, Media and Sport, allows residents and businesses to go through a registered supplier network for a contribution towards a community project in the village or area.

“It is a fantastic programme and helps rural communities take the problem into their own hands and work with local suppliers to build rural connectivity in areas that the larger providers don’t consider commercially viable to upgrade,” explains Mr Gibson Fleming.

Every install is different, so prices vary, but Wessex Internet reckons it can build a scheme on a per meter rate that is a fair bit cheaper than the main players.

The company has its own in-house technology support for customers and even does its own groundworks – something that has paid dividends when on farmland.

Many of the install team are farmers local to the area, which can help when dealing with landowners during an installation.

“We can’t have operators turning around machinery in drilled fields just because they lack the understanding of rural areas – our business is all about trust and we have to prove this.

“We have machinery that treads lightly as we appreciate how valuable the land is to farmers and landowners,” say Ludo Skinner, the company’s operations director.

The cost is kept down by using soft-dig routes across fields and under hedges, rather than trenching through highways.

This sometimes means they’re a bit longer, but laying a few extra metres of cable is easier and quicker than getting a road closure granted.

Any damage to crops is paid to the landowner at a flat rate that overvalues anything planted.

Wessex started out with a tractor and mole plough laying cable 1m deep but, as workload increased, the company invested heavily in bespoke machinery designed to cause less mess.

A Vermeer RTX 1250 vibrating mole plough is used to install the majority of cables across fields and paddocks.

It carries a large reel mounted on the front to pass the cable and warning tape over the cab and down the leg.

There is also a pair of Ditch Witch directional drills – a JT9 and JT10 – for the time-consuming job of crossing hedges, ditches and rivers.

They burrow under obstacles using 55 hollow rods that lock together and fill with water to keep the digging head cool and remove the soil that is being channelled out.

These can reach up to 150m, depending on the soil type and condition.

Unsurprisingly, clay is easy to drill and holds its shape well. Abrasive soils such as sand and gravel can halve the lifespan of a set of rods in just a couple of crossings. 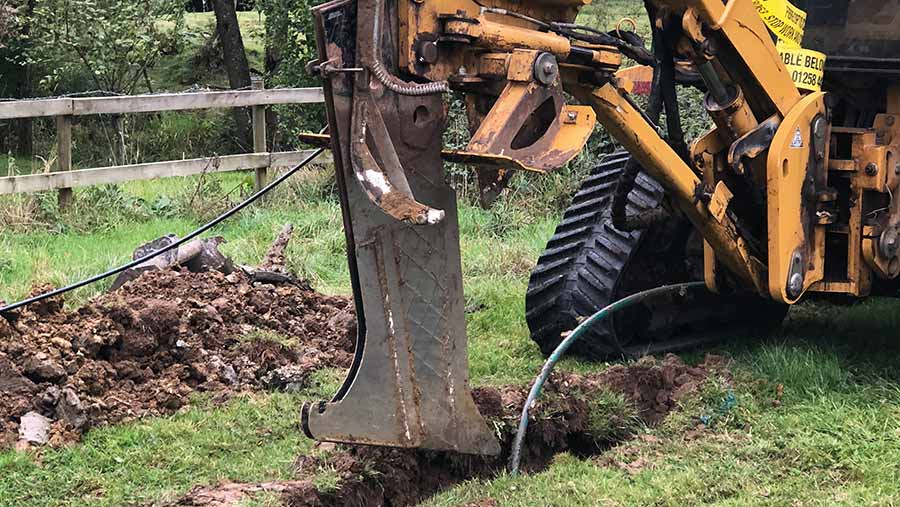 Wessex Internet is a founding partner of 5G Rural Dorset. The research and development project is focused on understanding how next generation connectivity can benefit the lives of people in rural communities and environmentally sensitive areas such as Dorset’s Unesco heritage coastline.

The project is a consortium led by Dorset Council and includes local, national and international partners.

It is part-funded by the Department for Digital, Culture, Media and Sport as a section of its 5G Rural Testbed and Trials programme.

The agriculture and aquaculture part of the trial is the largest of its kind in the UK to date and will include a 1,000-cow dairy farm, two large arable farms, a small mixed farm at Kingston Maurward College and a shellfish and seaweed farm.

Wessex Internet’s existing combination of masts and full fibre network makes it well placed to provide the infrastructure to test the system.

“Many high-tech agricultural developments are being designed to work offline, because the poor coverage in rural areas can’t support the transfer of data, but we are hoping this will fix that problem and open up new possibilities,” says Mr Hector Gibson Fleming.

Currently, data transfer between machines and cloud storage tends to happen when the machine returns to a central base or the farmer downloads the information periodically.

This slows the process down and limits the ability to assess and act on outcomes quickly.

All this data can be brought back into one central database rather than split up on several different platforms.

“We could be installing sensors that can last for eight or even 10 years on a single battery and provide a reading every 15 minutes for water tank levels or soil quality,” says Mr Gibson Fleming.