Drones have become popular in recent years with growers buying their own kit, but the rules surrounding their use are still very much in the developing stages, meaning there are a lot of grey areas.

For people looking at using drones on farm to monitor crops and weeds, there can be a fine line between personal and commercial use, and issues can arise with aviation and privacy laws. So what do growers need to consider to stay on the right side of the law? 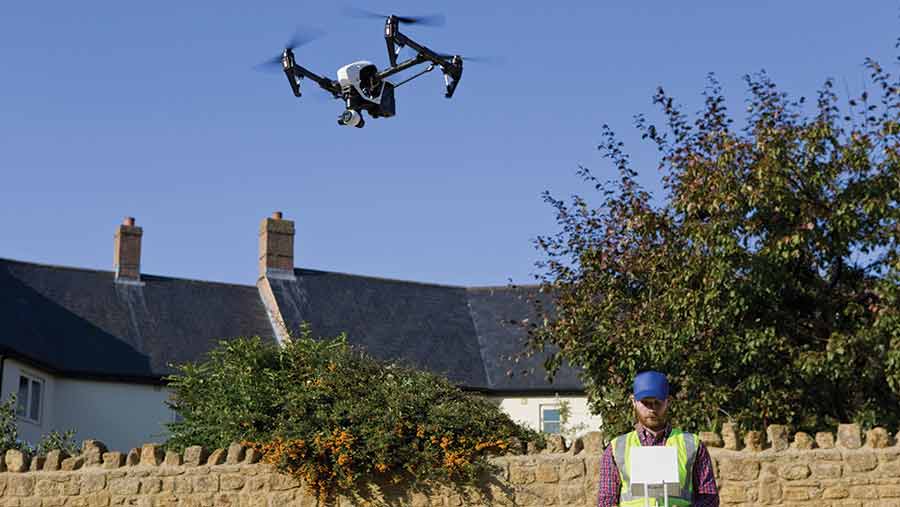 What are the legal requirements from the Civil Aviation Authority (CAA)?

“One issue farmers are likely to face is whether they need permission to operate a drone commercially,” says a CAA spokesman. Commercial use (aka aerial use) does require permission from the CAA, however defining aerial use is potentially ambiguous.

A farmer using a drone for day-to-day work such as surveying or inspecting a field, whereby they make no money from the use of the drone, does not count as commercial work. However, if the farmer hired this service out to a neighbour, it would count as aerial work and would require permission from the CAA.

“In future, companies looking to use drones for crop spraying would require permission as this is a direct commercial activity,” he adds. Permission can be granted annually and covers the specified activity to be undertaken; anything outside of the permission will not be allowed. “Farmers would be encouraged to keep a logbook of activity but they do not have to.”

Drones up to 20kg do not need to be registered with the CAA, but any weighing 20kg-150kg do and are subject to the Air Navigation Order – the legislation that covers all aircraft operations in the UK. Those over 150kg are regulated under EU rules.

Are there any areas where drones cannot be flown?

Distance separation rules apply for all aircraft users, whether being used recreationally or commercially, says the CAA spokesman.

“Drones should be kept close and in the visual line of sight at all times, as they could collide with anything.” The guidelines suggest this to be no more than about 121m vertically and 500m horizontally.

“Users must also keep the device 50m away from buildings, vehicles and people that are not in the control of the user, unless special permission has been granted by the CAA,” he adds. Drones must also not be flown over congested areas such as towns and large gatherings of people.

“There is no rule to prevent drones from being flown over someone else’s land, but you cannot land or take off on land without the landowner’s permission. If you crash a drone or it comes down in the wind, then it is advisable to apologise to the landowner.”

The best way to identify restricted flying areas is through Sky Demon Light, according to Jonathan Gill, research assistant and unmanned aerial systems (UAS) pilot at Harper Adams University. “This is an online viewer which notifies of any aerial events. It is designed for manned aviation, but it lets users know of restricted airspace such as RAF areas.

“Farmers should be aware that just because they own the land, does not mean they also own the airspace above it, but for drone usage they are usually fine. There should be no contact with other air users, even birds.”

It would be beneficial for farmers to do some training, says the CAA spokesman. “There are plenty of trainers out there and it is worth considering, as drones are expensive and you would not want to break one. There is a list of trainers available on the CAA website and it is worth shopping around.”

Farmers should also be aware that drones are likely to spook animals, advises Mr Gill. “Using drones around livestock is down to the farmer, but I have been asked to fly over cattle which spooked them and they went through a fence. It can be a danger to yourself and others.

“Farmers want to be able to launch a drone, have a coffee and let the drone do the work, without being aware that the rules mean a drone has to be within the line of sight at all times,” adds Mr Gill. “They are much less on board when they realise that this is not the case.”

Are there any requirements for liability insurance?

Mr Gill suggests that a farmer giving permission for a drone to be used over their land should set a minimum level of insurance for the drone user to have to cover any incidents.

Who is responsible should anything go wrong?

“If a drone spooked a horse which then jumped a hedge and got hit by a car, as it stands, the responsibility would likely be with the landowner,” says Andrew Gillett, legal adviser at the CLA. Although this may sound unfair, it can be difficult to identify the drone user and provide evidence, he adds.

“It is the non-commercial users the CLA is concerned with as they may not be as well trained. There is strict liability surrounding flying aircraft and if a crash is your fault, being insured is key.”

Are there any training programmes available for farmers to get the most out of their drones?

Harper Adams University currently runs a basic course on agronomy for drone pilots, which covers topics such as biosecurity, according to Mr Gill. “A more detailed course is being worked on. There is a lot of information to get through, so it will likely be a week-long course.”

Current privacy laws, as set down by the Information Commissioners Office, do apply to drone use, according to Mr Gill. This means operators should consider their surroundings, plan their flight, and not share photographs which may have negative consequences. In addition, the Data Protection Act means that information should not be shared without necessary permissions.

One of the key issues surrounding drone usage is preventing them being flown over private property, says Mr Gillett. “The potential surveillance capabilities are already incredible and they are growing; we are not sure there is enough power to protect privacy.”

What can farmers do who suspect drones are flying over their property without permission?

It can be quite difficult to identify who is flying a drone, says Mr Gillett. “There is nothing in place to identify drone users, so take a photo of the drone or the user to have half a chance of identifying them. If someone takes a photo of you on private land it may be an infringement of privacy, which can be an expensive litigation to follow up,” he adds.

“This is something that is likely to become more and more of a problem in the future as we are at the tip of the iceberg as far as personal drones are concerned.”

A lot of issues with drones could be classed as a criminal offence but the police are already hard pushed, so expecting them to deal with privacy issues from drones will be far down on their priority list, he explains.

“As rules are developed at an EU level, then the UK will likely start to look at further regulation, but as it stands they are applying a light-touch approach so as to remain at the forefront of developing technology.”

Learn more about flying drones at this year’s Cereals event, which includes the new AgHawk Drone Demonstration Zone. Visitors to have-a-go and learn how to use the information the drone collected on your flight.

There will be the chance to speak with growers using the technology to improve drainage, weed control and reduce input costs.

This year’s Cereals event is on the 15 and 16 June at Chrishall Grange, Cambridgeshire. For more information and to buy tickets in advance, visit the Cereals event website.

Or for more information, visit the Civil Aviation Authority website at www.caa.co.uk/drones