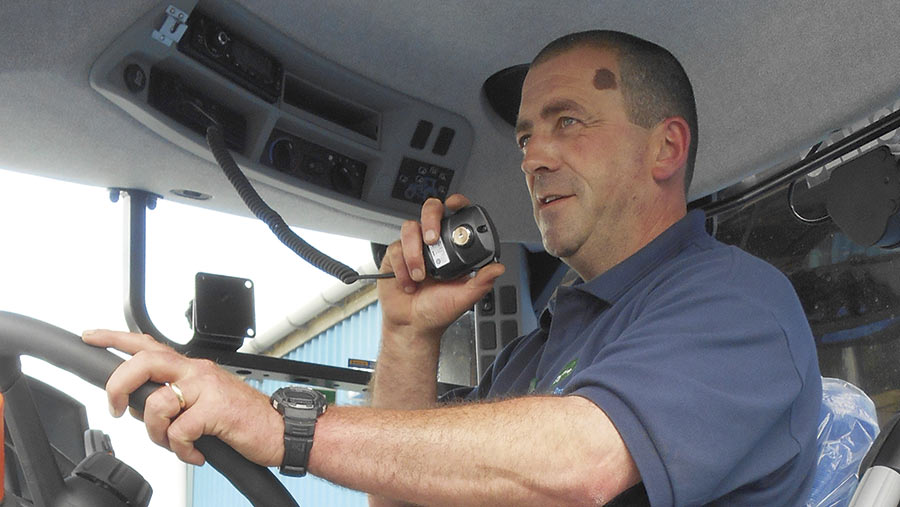 Whether you farm on land that is as level as a billiard table or you’re halfway up a mountain, being able to communicate with your fellow workers is a pretty important part of the business.

OK, so your trusty mobile phone does an amazing job in most situations, but it can seem like an achingly long time before your call meanders around the countryside and finally gets to the other person.

And while walkie-talkies (also known as PMR446) of the sort you can pick up in Maplin for £50 are great for chatting between the combine driver and the corn cart guy (and can manage 3-4 miles in ideal circumstances), they just don’t have the power to provide a reliable signal.

They are also frustratingly dodgy on any kind of undulating land, simply because the signal works on a line-of-sight basis. That’s why walkie-talkies can have absolutely no signal in a low place in a field, whereas a mobile phone has the benefit (hopefully) of using a tall mast somewhere in the vicinity.

So, what can you do to improve things on the communications front without spending a fortune? We asked Jim Clapham from Fieldtalk, a Gloucestershire company that specialises in two-way radio for rural businesses.

The answer is licensed two-way radio (also known as business radio). This gives you either 5W or 25W output depending on the device, a rather meatier signal compared to the 0.5W of a consumer walkie-talkie.

“There are lots of options that give you a completely independent radio system,” says Mr Clapham. “It can be simple radio-to-radio or, for a larger system, we install a base station and fit an aerial on top of a grain bin or the farm office to get a better reception.”

“You can buy a pair of radios that are programmed correctly from your local specialist (shops are few and far apart) for £150/unit and many farmers would want to take that route. Or you can rent them.”

Monthly rentals typically cost £20/radio and you might well need them for no more than a month, so the costs shouldn’t be too steep.

Hiring rather than buying also means that you don’t have to worry so much about the wear and tear on the radios themselves. The aerials do get bashed about but can be mended and replaced, says Mr Clapham, and keeping the radios in pouches will lengthen their service life.

Batteries should typically last 3-5 years. The batteries are typically lithium-ion or nickel metal hydride and should give good service, but it’s a good idea to drain the battery fully every so often. One benefit of two-way radios is their reliability – many of them are still working fine after 10 years’ service.

One small but important tip is to keep the radios away from the workshop bench as the magnets in the speakers will attract any stray iron filings. Oh, and they’re very useful for shooting in the autumn, too. 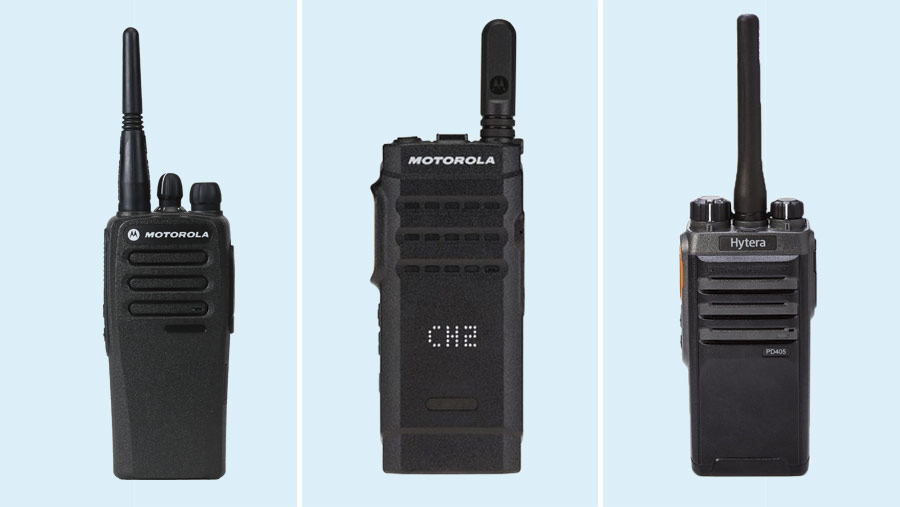 There are lots of makes of two-way radio. Motorola is the best-known, but Vertex, Hytera and Icom are also well-made units, says Mr Clapham. All the good makes should have IP-rated waterproofness, too.

Good specialists and online retailers will be able to sort out the licensing of the radios on behalf of the customer. If you have several radios, a good tip is to get the retailer to put conspicuous stickers on each of them so that each one “‘belongs” to an individual member of staff. That way, they will be more likely to be looked after.

You can also add speaker mics and ear-tie mics and a huge range of accessories (though these can be expensive), as well as fully fitted vehicle units.

Fitting a ground plane aerial unit on top of the tractor, forager or combine can also improve reception, but you need to keep it away from the autosteer aerial.

I want to put a unit in the tractor; what about the aerial?

An antenna is designed to work on a metal car roof giving it a horizontal ground plane. If you have an older tractor with a steel roof, popping a cheap mag-mount aerial on the roof will probably be fine. However, most tractor roofs are now plastic, which stops the antenna transmitting properly.

To get any sort of decent signal you need to create a ground plane, usually by fitting a piece of metal or metallic foil at least 400mm in diameter under the aerial. A new range of flat box antennas is now available that can’t be knocked off by trees or other obstacles.

Taking the roof apart on most tractors and combines can be daunting, but a good installer should be used for that bit.

It depends who you go to, but expect to be charged about £300 for a mobile unit installed in a pickup or tractor. It can be more expensive depending on the type of vehicle – some modern combines and machines with GPS need a more professional installation so there is no interference.

It takes about two hours to fit one properly in a tractor. The typical cost of a hand-portable starts at about £160.

What is the latest technology?

Digital private mobile radio (PMR) first appeared 10 years ago and is now widely used by all radio users. It allows you to talk to different people or different groups from the same unit.

So, on a big farm, you could press one button that puts you in contact with your arable team, another for the livestock team and a third for the packhouse.

More acres to cover? Want an Ofcom licence? There are two sorts of radio licences that are of interest to farmers.

The most popular is the Simple UK Licence, which costs £75 and lasts for five years. It allows you to transmit and receive on frequencies set by Ofcom, and you can talk directly between vehicles or hand portables. Power is limited to 5W.

If you do a lot of contracting and would like to have a bigger range, you may want a repeater base, which rebroadcasts the transmissions from the vehicle radios, thereby increasing the range. This system requires what is called a Technically Assigned Licence.

Ofcom will look at what coverage you want and what other transmitters there are in the area and allocate you a base frequency, antenna height and power output up to 10W to suit your needs.

The price of this sort of licence is usually about £100-125/year and gives about a 35km radius, depending on the landscape. “For a larger system we would always recommend a site survey before committing,” says Mr Clapham.

“You can start with a Simple system and upgrade to a Repeater system later, if required. The radios are the same and can be reprogrammed with a laptop.”

“Some big farming companies need to talk across a whole county and subscribe to commercial radio systems or internet linked systems, allowing them to get coverage over a vast area.”

Peter Snell farms 1,100ha of arable crops at North Farm, Horton, Wimborne in Dorset. He struggled with bad voice calls, dropouts and generally poor quality unless it was just calls between the combine driver and corn cart operator. 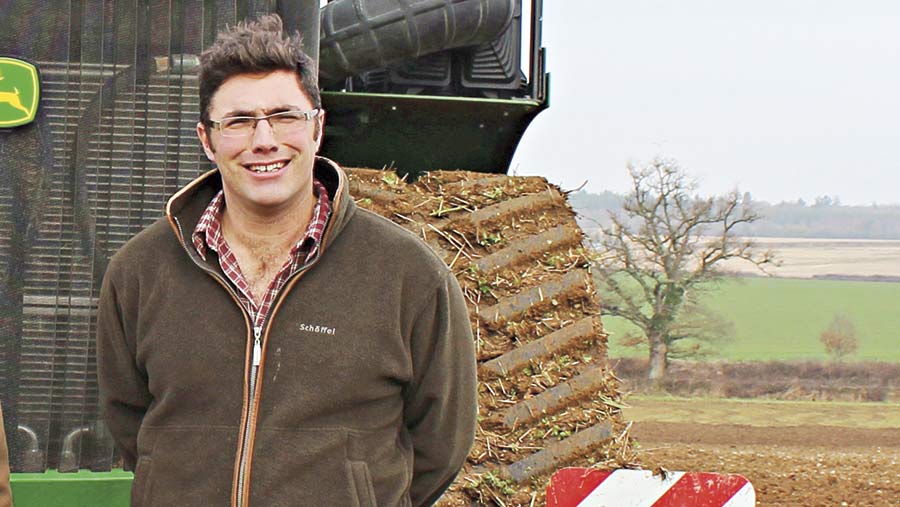 He approached two telecoms companies but chose Gloucestershire-based Fieldtalk. The result is a remarkable improvement in quality, he says, with calls still stable as far away as Salisbury (6-7 miles).

He makes very good use of the radios, he says. “We have a base station on the grainstore, a unit in the farm office, one in the combine, one in the self-propelled sprayer, two in Fendt tractors, one in both the Deere and JCB, one on another vehicle plus two handheld versions that everyone on the farm can use. Also you can use one of two channels and our own channel.”

“Even if the base station goes down or we are out of range of the system, we can still use the two in radio-to-radio mode,” he says. “It’s almost instant. We wouldn’t be without it.”

“It’s also helpful for lone workers – the radio can act as an SOS system.

Volume is fine, even in older, noisier tractors, he says. Cost of buying and setting it all up cost about £6,000, but Mr Snell reckons it’s well worth having it.