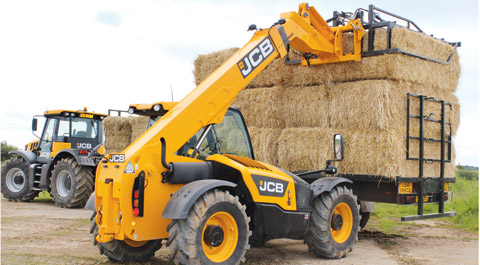 The exhaust emissions rules that have brought so many changes to tractors over the past 12-18 months are now affecting telescopic handlers too. Peter Hill reports


This year’s telehandler buyers guide listing features a number of newcomers from the leading manufacturers.

The biggest revamp is seen in JCB’s range. There is the same choice of lift capacity, height and reach options as before but all Loadall models apart from the hydrostatic drive 527-58 get the Ecomax version of JCB’s own four-cylinder diesel engine.

That brings an increase from 100hp to 109hp for base models and an increase in output from 130hp to 145hp for top-spec machines. Higher torque outputs help performance across the range yet the new engine also promises improved fuel economy resulting in lower running costs.

There have also been a number of detail changes. Transmission operation has been simplified with the joystick buttons replacing the powershift twist grip and pressing the brake pedal disengages drive. Brake pads are also actively withdrawn to eliminate any risk of drag and premature wear.

In the engine bay, cooling airflow now exits from the top of the engine hood, not down to the ground – so it doesn’t stir up dust and debris.

There are now two distinct models at the top of the firm’s artic chassis TeleMaster range which both get an extra 100kg of lift capacity. The 125hp TM320 continues with a 140-litre/min load-sensing hydraulic pump, but the 145hp TM320S has 160-litre/min hydraulics and torque converter lock-up from second gear to improve its ability to climb a silage clamp.

Also serving up latest emissions spec engines is Caterpillar, with generous output gains from 101hp to 124hp and 126hp to 142hp for the two engine options in its “C” series telehandlers matched by increased torque. Uprated cooling and a debris-shifting reversing fan are also part of the package.

In addition, a six-speed powershift transmission gives an extra ratio over the previous model. Shifting has also moved from a twist grip to the joystick, and the air conditioning unit has been moved to the more popular location on the rear of cab roof.

The newcomers all feature Dieci’s Vario System hydro-mechanical drive, which has 0-49kph scope for road travel, 0-20kph for loading and handling operations, and a variable top speed setting that allows the operator to maintain revs for hydraulic performance while preventing excessive forward or reversing speed.

Some rationalisation has occurred in the Manitou agri telehandler range by standardising on the 123hp Perkins engine for the MLT 634T and MLT 735T while dropping the 6.9m machine in 3.1t and 4.1t configuration.

However, there is also a newcomer in the shape of the MLT 840-137 PS, which marks the first-time appearance of a Deere engine in the range.

With 137hp output it offers a performance boost over the Perkins-powered machines and there is increased hydraulic power too, with a flow of 180-litres/min available to lift the boom and manipulate attachments. Lift capacity peaks at 4t and 2t can be taken to the full 7.55m lift height.

An ultra-low height version of Merlo’s smallest telehandler – the P25.6 – slips into the range standing at 1.77m and there is a switch from Deutz to Perkins engines of similar power output for the Turbofarmer 28.8 and 32.6 machines.

The Multifarmer range gains two models with more modest lift capacity and hydraulic power to broaden the appeal of this multi-purpose design feature rear linkage and pto. There is a 2.9t model lifting to 6.4m and one with 2.7t capacity lifting to 8.2m.