Our test machine was the biggest in Bobcat’s line-up of ag-spec TL telehandlers, offering a lift capacity of 3.8t and a 7m reach.

Those looking for a more compact machine can turn to the TL30.60, which kicks off the range. This has a 3t lift capacity, 6m reach and is small enough to tuck into tight sheds.

It also comes with the same 3.4-litre Doosan engine and two-speed hydrostatic transmission as the larger models. 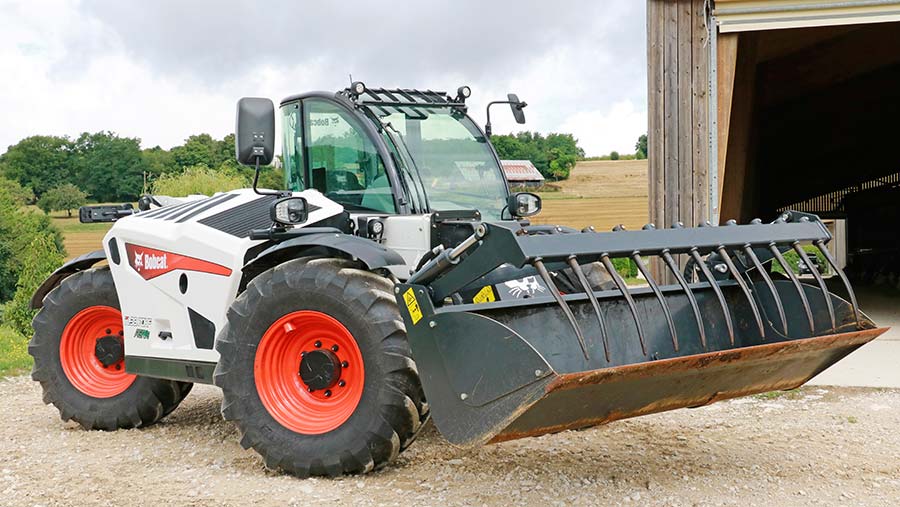 Standard features across the range include an automatic electric handbrake, programmable reversing fan and a cushioning system on the boom retract.

All of the telehandlers are designed and manufactured at the firm’s Pontchâteau factory in north-west France.

Bobcat’s handlers have been sold in Massey Ferguson colours for decades, with its own-branded machines initially reserved for the construction market.

However, recently Bobcat has decided to sell its glossy white machines directly to farmers.

The loaders are still available in MF colours, but the decision will have ruffled a few feathers at Agco.

The TL 38.70 HF on test had clearly come from the construction mold, with a tough, basic interior and simple controls.

It was a reasonable performer, notably in the hydraulic department, and the hydrostatic transmission seemed more efficient than the Merlo’s.

It also comes in a lot cheaper than the JCB and Manitou, which makes it an attractive proposition for those who don’t need all the bells and whistles.

This was one of the most basic cabs in the test, which for most people is no bad thing. There is also plenty of storage space on the cab floor and under the seat for stashing chains and ratchet straps.

However, because you sit fairly low in the machine and there is a bulge at the top of the engine bay, visibility out of the right-hand side is not as good as some of the other handlers on test.

You get a decent view of all four mudguards, though, unlike the Dieci. 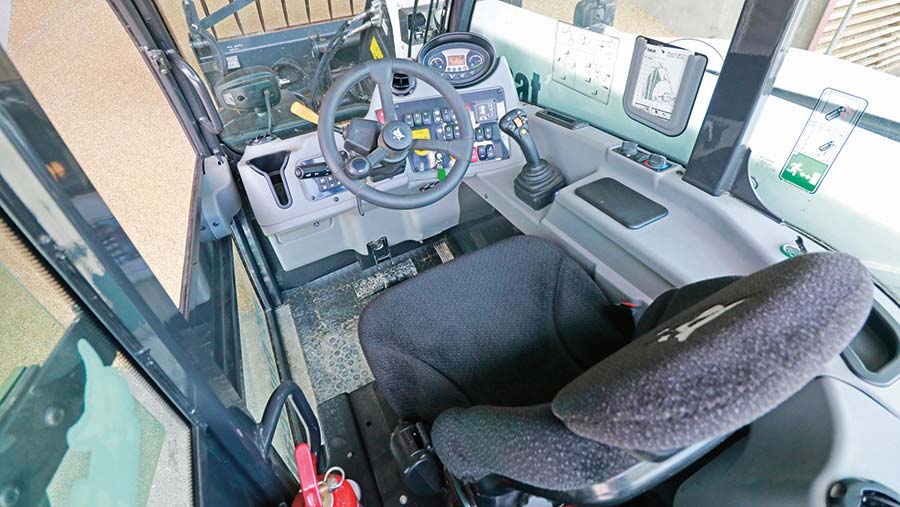 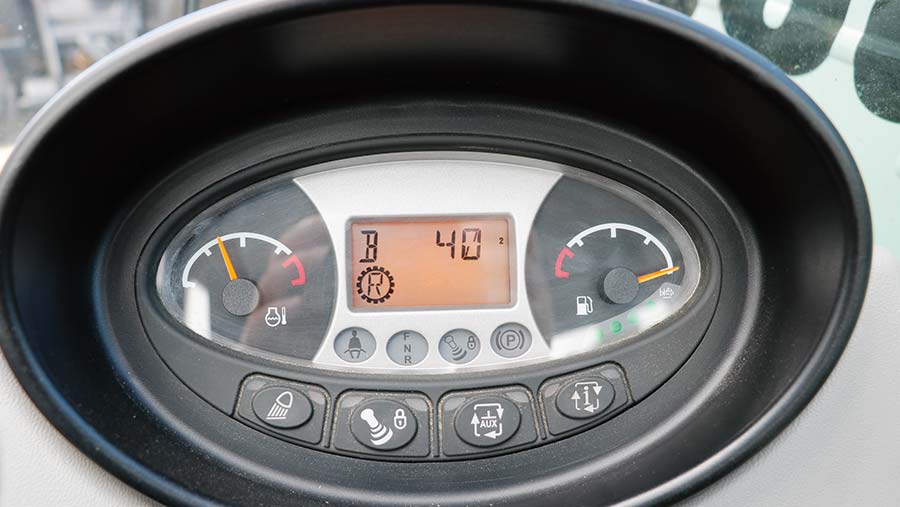 Unfortunately, the base of the door can’t be pinned back, but it is considerably less clumsy than the Manitou’s set-up. 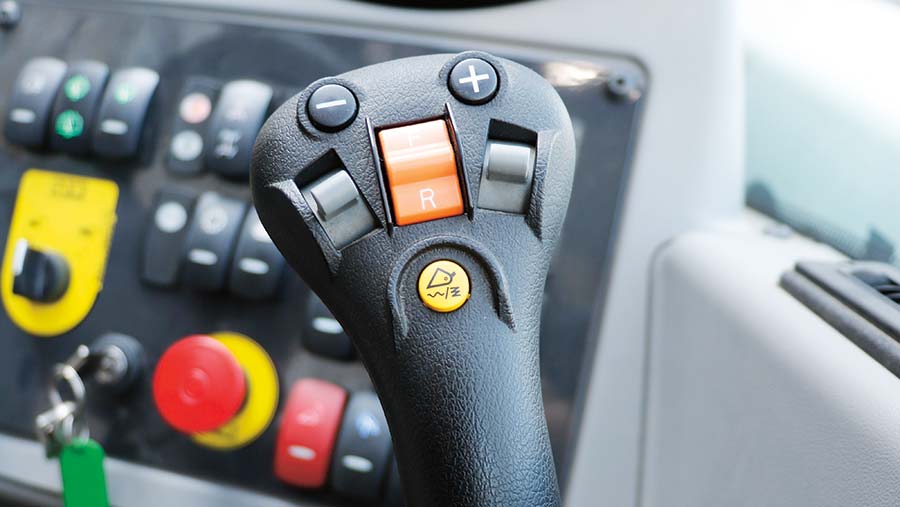 Generally, the Bobcat’s controls were simple, with a straightforward joystick, shuttle lever and pedal arrangement.

But there were a few functions hidden away in the screen that you could only properly fathom by delving into the manual.

Once we got to grips with the obscure lettering of the functions, we navigated them well enough.

One feature that did stand out was the auto-electric handbrake that flicks on and off without you having to think about it.

This means the handbrake should always be on when you disengage drive and hop off the seat.

After being taken over by South Korean construction giant Doosan, the Bobcat now sports a four-pot engine from its new parent firm.

It gets around Tier 4 final emissions regs by using exhaust gas recirculation, a diesel oxidation catalyst and an SCR system.

As for fancy functions, these are limited to a creeper setting that allows you to adjust revs independently of forward speed and a system for setting intervals for the hydraulic reversing fan to kick in. 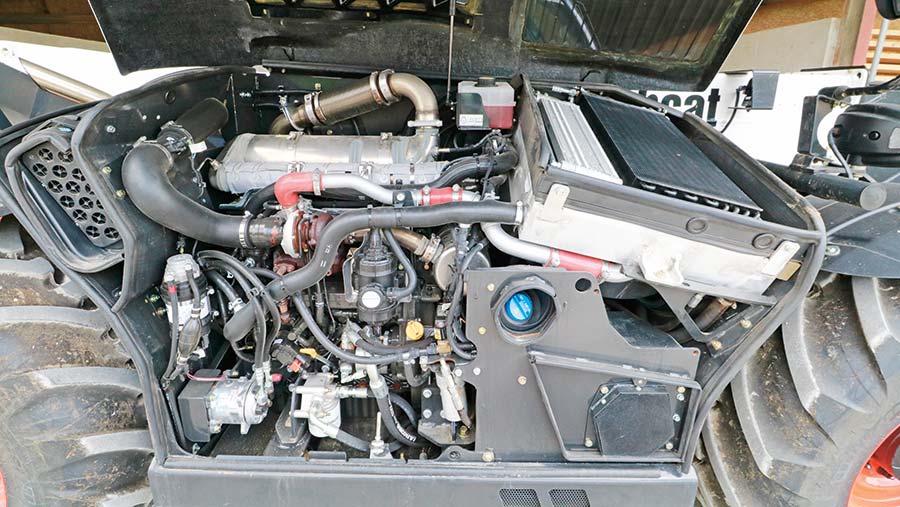 Continuing with the simple set-up, the Bobcat uses a twin-range hydro-mechanical gearbox, very similar to that fitted in the Merlo.

The two ranges are changed using a rocker switch on the dash, and the handler has to be at a standstill before you can do this.

However, Bobcat has also fitted the machine with a two-speed hydrostatic motor that can be changed on the move.

By pressing a button on the end of the left-hand forward/reverse shuttle lever you can significantly alter the gearing of the motor, which feels like you have an extra speed setting to play with.

Standing on the sizable brake pedal disengages drive, so you can rev up to shift a heavy load without flicking into neutral or using a separate inching pedal.

The transmission is also set to creep when you lift off the brake pedal, so you don’t have to use the accelerator when inching up to loads.

A 190-litre/min pump makes the hydraulics seem sprightly from the off and in our cycle time test it was the fastest of the bunch to raise the boom at both low and high revs.

It also had the quickest overall cycle times at medium revs. However, at lower revs the boom was sluggish to drop and retract, giving it the slowest overall time. 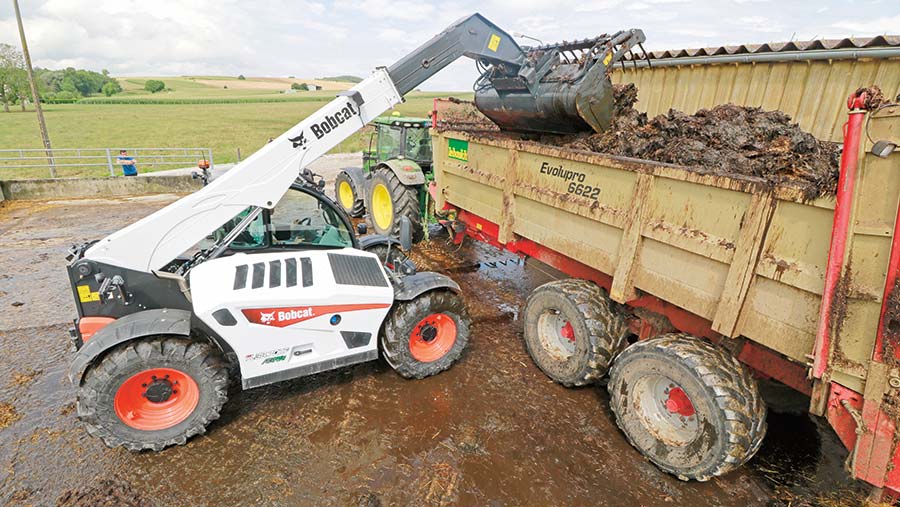 As for boom suspension, there is a two-stage accumulator system, which means it can adapt to different-sized loads. This can also be switched on and off using a button on the joystick, which we thought was a handy feature.

The EN15000 safety lockout could be overridden using a key on the dash, but thankfully we didn’t need to resort to using it that often. However, it wasn’t nearly as forgiving as the system in the JCB.