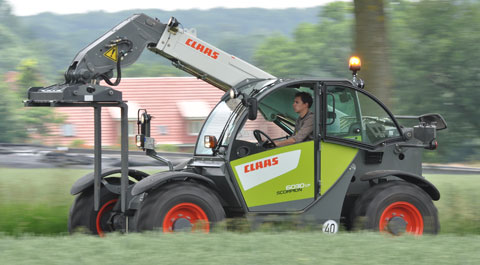 The Claas Scorpion is made by German loader specialist Kramer and its hydraulics (which come from Bosch Rexroth) push out 155 litres/minute. Working at our standard measuring point at 4.5m height and 1m in front of the machine, the Scorpion achieved a good 3.2t lift capacity. In fact, it was the best performance in the test.

The average lift capacity (3.9t) and breakout force (4.9t) are also pretty respectable. That’s good stuff, as is the fact that the last bit of boom extension is damped just before you get there.

The parallel linkage action of the bucket first of all pulls it slightly inwards, which is good. However, it tips it outwards again by almost 6º by the time it reaches maximum height, although we had no spills during loading.

There are no such parallel linkage oddities with the pallet forks. The very slight pull-in in at the lower end of the lifting arc is very useful. Above that section, the tines are kept level.

The Scorpion produces slightly more than 100hp from its Deutz engine, with the Varipower transmission taking the power to the wheels.

Claas and Sauer Bibus developed a system whereby a hydraulic pump drives a hydraulic motor linked to the axles via a transmission. The idea is that this rotary system brings more draft power at low rpm.

In practice we were pretty impressed by this combination. In first gear, there’s more than 5t of pulling power and in second gear there’s up to 6.5t. That should give the driver enough in reserve for all situations.

Using the inching pedal means the drive can be very sensitively controlled. The brakes are good too. 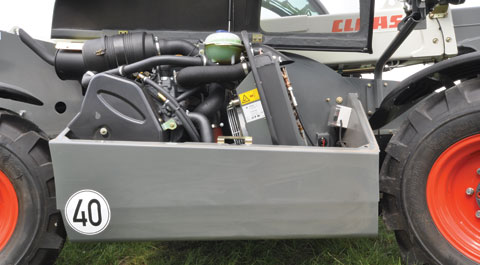 One thoughtful point – the engine-cooling air blows out the back of the loader. This avoids dust clouds in barns when you’re driving along the feed passage.

You select steering mode (front/4-wheel/crab) with a lever and two lights tell you when you are in the mid position. This is fine. With just under six turns from lock to lock the driver has to really crank the wheel when manoeuvring.

Whether it’s changing direction, controlling the boom or using the exterior hydraulic valves, all the Scorpion’s important functions are on the joystick. 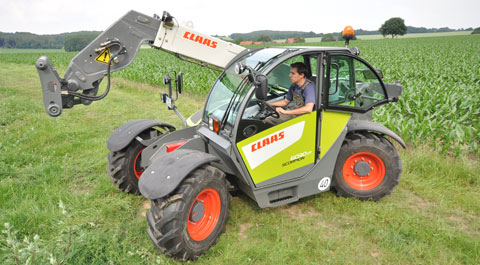 Spool valve control can also be transferred to the rear hydraulic valves via a rocker switch. The switches in the cab are grouped in different colour codes, although they’re not always clearly labelled.

We liked the new Smart Handling safety function, which ensures the arm is automatically drawn in as it is retracted. This is a real advantage when loading high-sided trucks or stacking straw.

It’s quite a climb getting into the Claas cab, but at least there’s a step.

The driver’s seating position is OK, but the angle of the throttle pedal and the brake/inching pedal could be improved – you feel a bit like you’re standing on the pedals from above.

A slightly steeper pedal angle would be preferable. 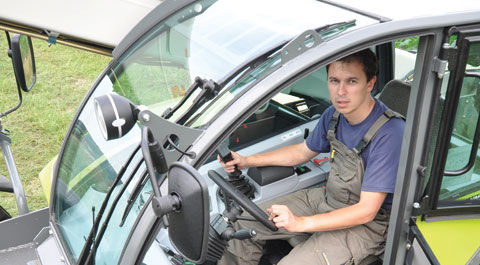 The cab feels roomy and has some useful small storage areas.

The heating works well, with fixed vents and three adjustable warm outlet vents. The angled instrument panel allows good forward visibility. And visibility to the left would be even better if the door window was a little lower.

The loader seems solidly built and high quality and at the rear there is a central lubricating point for difficult-to-reach spots. However there’s no protective shield beneath the telescopic arm, so dirt can get into the working parts of the machine at this point.