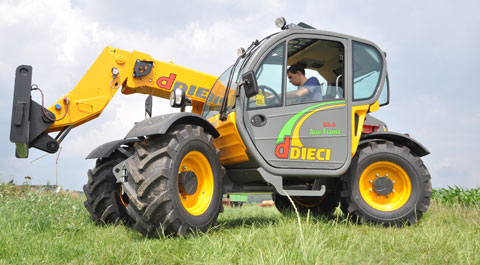 At the standard 4.5m high measuring point 1m in front of the machine the Dieci managed to lift 3t, second best in the test. The average lift power sits just under 3.9t and was in the middle of the pack.

A 4.6t breakout force is very acceptable and even with the boom fully extended, a 1.6 t lift means the loader certainly doesn’t disgrace itself. 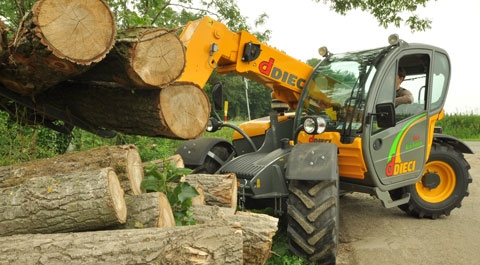 The parallel linkage system allows a bucket or pallet forks to tilt forward as it rises by around 3deg, although the tilt angle at full height is 5deg. It’s not difficult to work with the system – the tilt angle is very small.

When it came to speed of loader work, the Dieci ended up in the middle of the pack. At full throttle, work was a little slower than the competition but the faster loader speeds at engine idle and half-throttle balanced this out.

Dieci uses a Perkins 101hp engine with hydrostatic drive and a reduction transmission. In first gear forward force is a very acceptable 5.2 t however in second gear it is a very weak 1.6t. So with heavy work it means changing down.

We would have preferred it if Dieci had designed the first gear to go up to around 14 kph instead of 8kph so that quick loading could take place in first too. 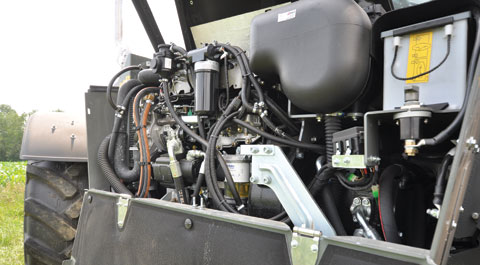 Dieci offers a combined brake and inching pedal as an optional extra. We strongly recommend you take up this offer because in our test machine (which had separate pedals) the loader didn’t stop moving on slopes when the driver used the inching pedal only.

Steering mode selection is via a lever behind the joystick. A light indicates that it’s in the mid-position although a button has to be pressed first.

Dieci drivers can also use the joystick for controlling boom operation and external spool valves. They can also specify a switch for shuttle operation on the joystick instead of the steering wheel.

However the button on the stick isn’t very practical – if it’s not continually pressed, nothing happens. A better bet would have been a separate lockable switch.

It is also possible to injure yourself on the mechanical stop for the steering mode lock, which is positioned behind the joystick. If the small plate is not set downwards, the underneath of your arm can catch it.

There’s no split door but an electric window instead, which is a practical way of doing things. However, the glass doesn’t disappear completely into the door bodywork.

Dieci extends the front windscreen upwards into the roof with a useful opening that brings in fresh air. The sun visor can be set in three positions – including one that’s right in front – good stuff. At the back, the cab roof slopes down which slightly hampers rear visibility. 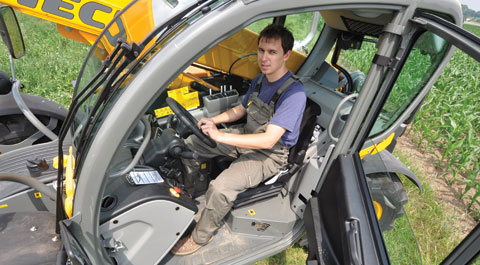 Front visibility is good, although slightly hampered by the bracket for the worklights. The high seating position means the view to the left and right is good, though the electric window means the door isn’t an all-glass one.

The engine is only accessible from above, which is not ideal. Also, dirt can collect in the tool attachment locking system. 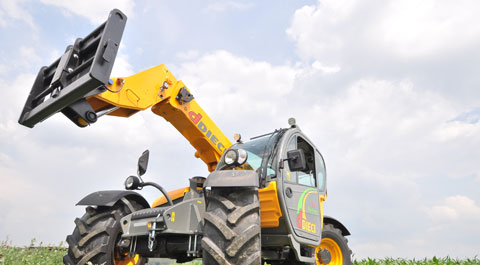