Dieci offers a massive range of agricultural telehandlers covering almost every combination of lift capacity and reach you can think of. 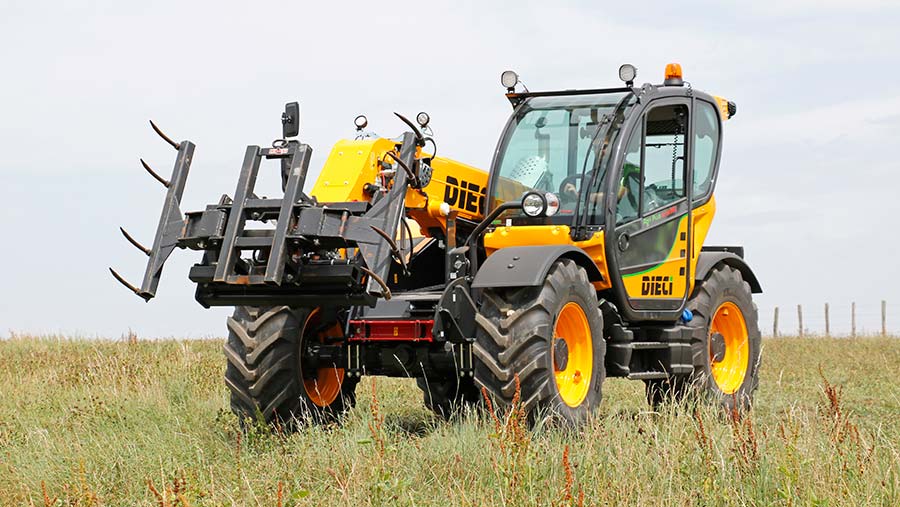 That puts our 40.7 test machine roughly in the middle of the range.

This comes with the second-largest motor of our test group and it develops an average-looking rated output of 138hp, but the flip side is that is offers a peak power of 152hp.

As for transmission options, there is a two-speed hydrostatic – fitted in our test machine – and a more basic powershift box.

This gearbox choice also comes with a less-powerful 119hp engine.

For the past few years Dieci has been working hard to get a strong foothold in the UK telehandler market.

Its approach of offering powerful, well-specced machines at reasonable prices has brought it some success, but in a market with so many more established brands, it still has a little way to go.

As for the machine in our test, it certainly delivered in the power and performance stakes, ranking highly for horsepower and hydraulic output.

It also had a techier-than-average hydrostatic transmission and a pretty generous spec.

Its downfalls were its slightly cheap build quality and odd styling. The ride on rough tracks and the switching off of the boom suspension system meant it was depressingly bumpy on rough farm tracks too. 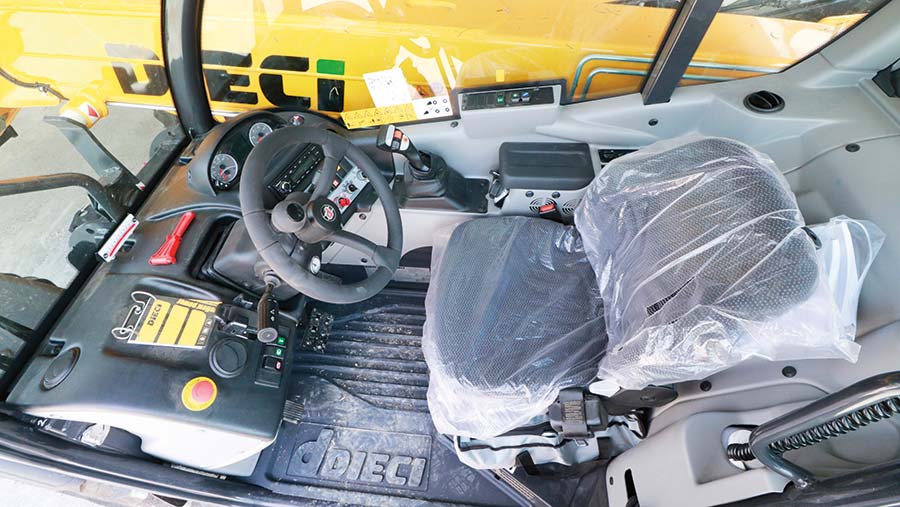 The Italians have engineered the largest cabin in our test group.

The sweeping front window gives an excellent view of the boom right through its arc and the internal roof protection bars mean it is easy to keep clean.

But for jobs where you spend a lot of time hopping on and off the seat, the bulky door with electric window is less than ideal. This can’t be pinned back out of the way and is slow to open and close. 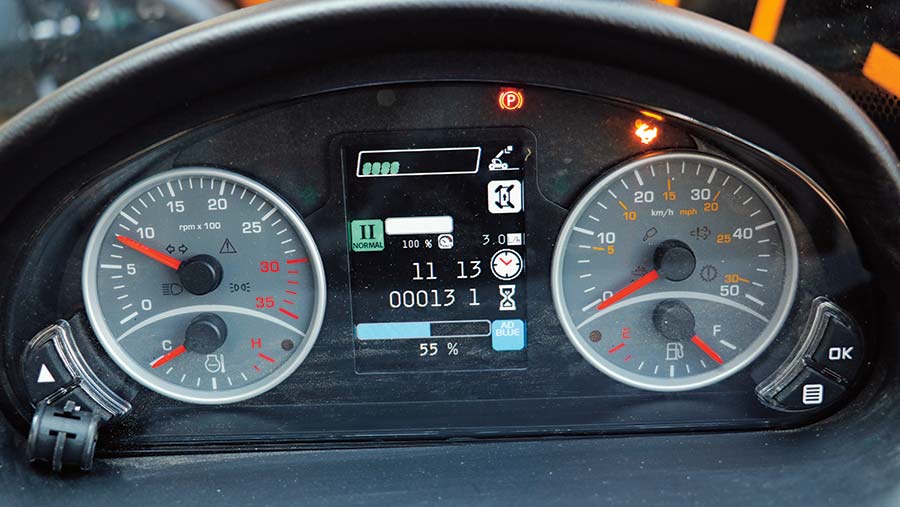 Other bugbears included an unnecessary number of irritating warning buzzers and the fact that the huge exhaust stack completely obscures the driver’s view of the offside rear wheel. The boom pivot is also a little on the high side. 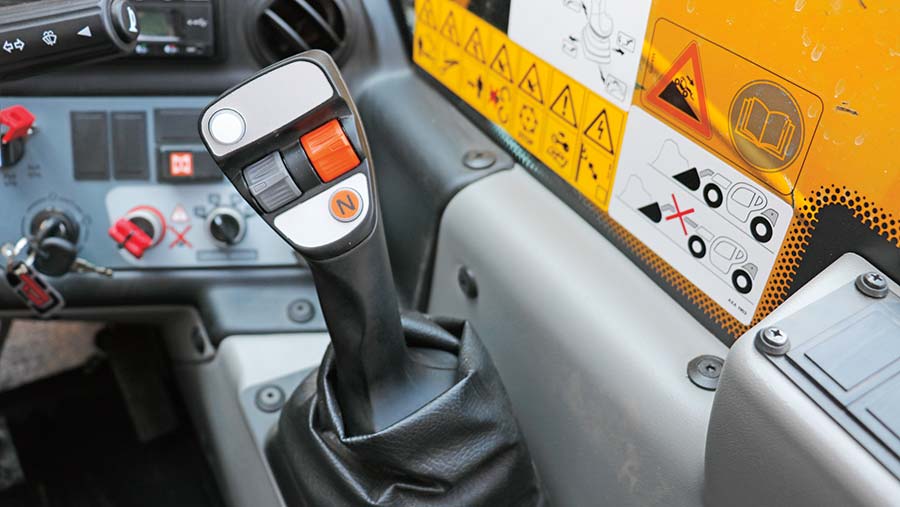 As a whole, Dieci’s in-cab controls are pretty good, particularly the joystick, which was responsive and fell easily to hand.

However, it did feel cheap compared with the top-quality version used by JCB.

Although we can clearly see the point of the machine’s four driving modes (more on that later), we’re not sure they will be that well used in practice.

Also, if you haven’t read the manual, you’ll be at a bit of a loss as to what they actually do.

In the footwell, there is a throttle, brake and inching pedal – we prefer the set-up used in the JCB and Bobcat, where standing on the brake pedal disengages the drive.

The Evo2 featured in our test came with the more powerful of the Italian maker’s two engine options – a 138hp four-cylinder FPT, which offers a peak power of 152hp.

Those who don’t need as much go and want to save a few quid can also have a detuned version of the same 4.5-litre block. This is rated at 109hp, maxing out at 119hp.

The engine meets the Tier 4i standard thanks to an SCR catalytic converter, which is slotted into the huge exhaust stack at the rear.

However, 2018 will see the introduction of a Tier 4 final version with an extra diesel oxidation catalyst. 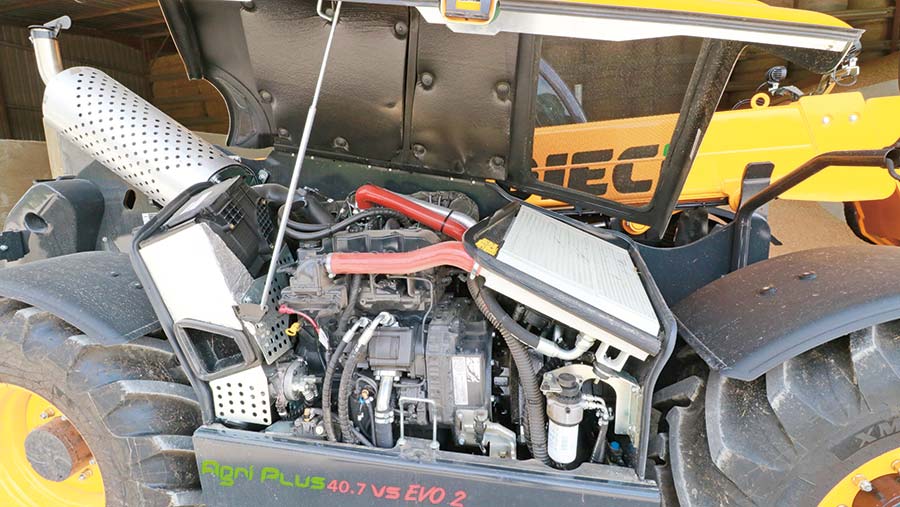 Hydrostatic drives were the most popular gearing option among our test group, but the version fitted in the Dieci is slightly different.

Rather than using a single motor with two mechanical ranges, it has two hydrostatic motors with different displacements. Four selectable driving modes govern the way in which these work together.

Normal mode is best for towing duties and uses both motors to push the machine along at up to 40kph. There’s an eco setting, too, which will also get the handler up to 40kph, but once cruising it will switch to one-motor drive.

For more aggressive work, loader mode uses the full poke offered by both motors to maximise pushing power. This also limits the top speed to 18kph.

The final setting is a creeper gearing, where the driver sets engine revs and limits forward speeds on two separate dials on the dash.

The throttle is then used to cruise up to the set speed without affecting engine revs. It is also possible to shift transmission ratios manually by twisting the shuttle lever.

Dieci has put plenty of hydraulic performance on tap thanks to a meaty 210-litre/min pump. This helped give it the fastest cycle times in the low- and high-rev ranges. 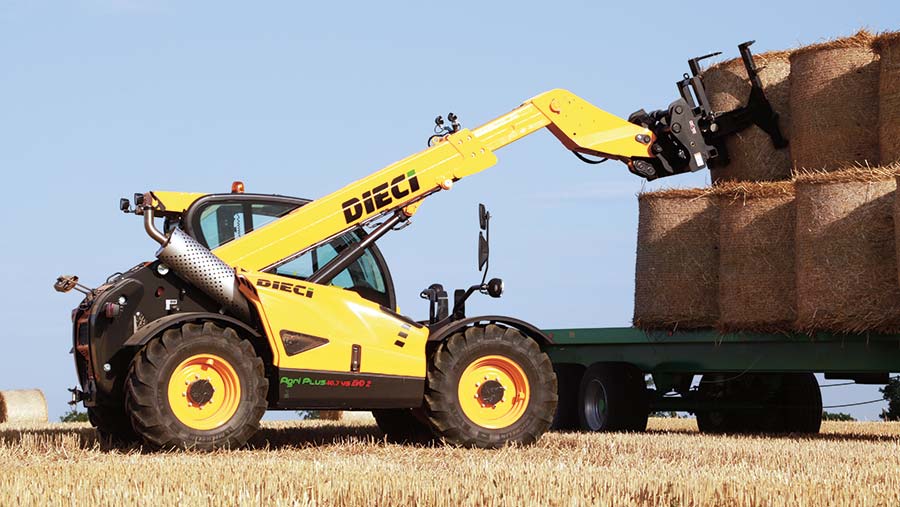 Less good was the boom suspension system, which is connected to a sensor on the joystick. This means the system is switched off whenever you touch the joystick.

If you drive it by the book and stop before operating the boom it’s no problem. But who is ever going to do that?

The boom also flexes a lot, to the point that Dieci has fitted guides to help keep it in place. The firm’s approach to safety regs is sensible though, with a palm sensor on the joystick.

This is far better than the clunky trigger from rival Italian brand Merlo.