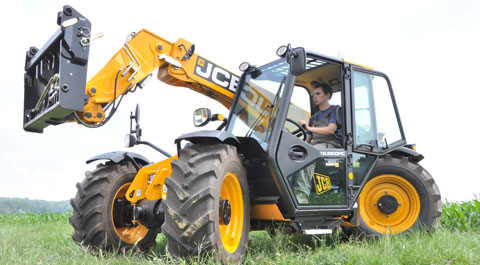 JCB fits the 572-58 with a Walterscheid pump sporting a maximum 122litres/min of oil throughput. Its 2.7t lift at our special measuring point meant it was a middle performer in this company. The same is true of its average lift, too (3.8t) and its full boom extension lift was above average. Finally, at 4.5t the breakout force stood up well against rivals’ figures.

The JCB scored points for its work speed. Nearly all the manoeuvres we asked it to do came in under the average times, so quick loader work should be no problem.

It tilts its bucket during lifting by 9deg and then by another 4deg, so you have to correct it slightly when loading a trailer. With the pallet fork the tilt variation was around 3deg.

The standard boom shock absorbing system can only be activated with the arm completely lowered and is very effective.

JCB uses its own 100hp engine in the 527-58. Hydraulics are from Walterscheid and in both gears there’s a good 4.7t of pushing power available, slotting this loader in the upper middle of the test machines.

In practice these results meant we were able to work smoothly in heavy gravel. When it came to draft capacity, too, the JCB positioned itself midfield but it went right into the lead with speed of loader work and capable of more than 40kph in second gear. 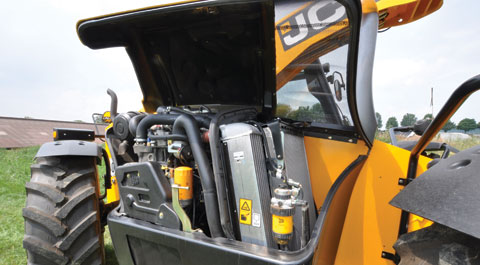 The steering mode selection switch, which is on the left hand side of the dashboard, also works well. The driver selects the mode first and the machine does the rest. In front-wheel-steer mode it’s also very light to shift from lock to lock.

JCB fits separate inching and brake pedals. The small inching pedal on the left can be very sensitively operated and stops the loader completely. The brakes are sensitive and stop well. A reversible fan is standard.

The third hydraulic function is positioned on the joystick, along with the boom extension and other switchgear. The shuttle can also be preselected by a lever on the steering wheel.

This has priority, so as soon as the driver has selected direction of travel at the steering wheel the switch on the joystick has no function. If he wants to work with the switch, the lever has to be put in its mid position. 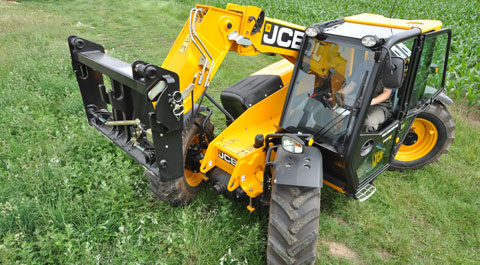 Gear choice is selected via a rocker switch on the dashboard. This is simple and the switch sits right in the operator’s field of vision.

Further switches are set to the right and left on the dash. The logic of the switch markings is, however, not always clear. Sometimes the symbol has to be pressed. Mostly, however, the symbol is on the opposite side of the switch.

Visibility to the front is slightly hindered by the worklight bracket and a protection panel under the windscreen wiper. The windscreen doesn’t extend seamlessly into the cab roof area but is divided by a bar. When you’re loading a trailer this falls roughly in front of the top of the trailer – a bit irritating.

To the left, the visibility is very good through the fully-glazed doors. Looking right, the operator is helped by a wide-angle mirror. Views to the rear are OK; to the rear left very good. 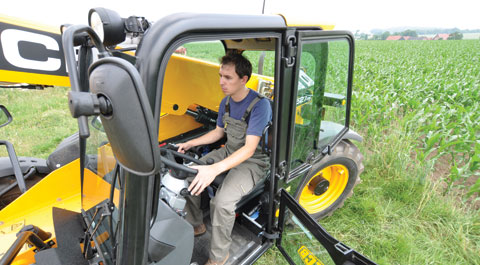 The ventilation fan in the JCB has only two speeds with the second one very loud. There are some fixed air nozzles for the windscreen and two moveable ones for the side windows.

The transverse engine is easy to get to by lifting the large cover. Underneath the boom there’s a panel that stops dirt getting in. Overall this loader gave an impression of solidity.