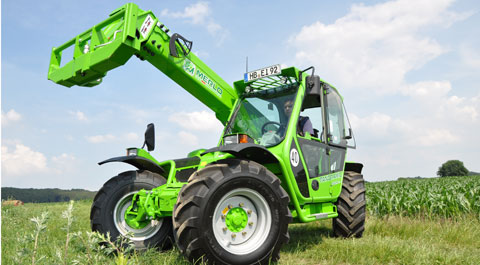 Delve into the innards of the Merlo P 32.6 Top and you’ll find a Sauer Danfoss load-sensing pump delivering 108 litres/min. At our special measuring point the loader managed a good 2.7t lift which put it in the middle of the pack, performance-wise. Its average lift was, however, 4.3t so clearly above average.

The Merlo had plenty of power in reserve with its breakout force at 5.8t. The load indicator and the safety system proved very sensitive and activated often during snappy driving with a lowered load. However the loud alarm was irritating.

The loader cycle times were slightly over the average of the test candidates. However, the Merlo’s hydraulics worked speedily, especially during boom extension and retraction. 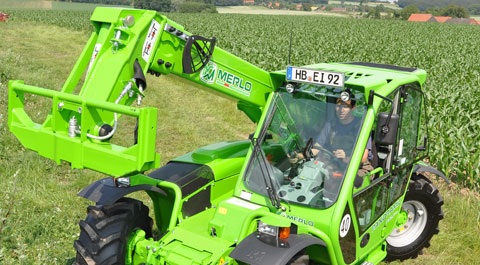 The attachment parallel linkage system is well adjusted to meet the demands put on it during loading with either a bucket or pallet forks. The bucket tipped inwards slightly during the lower part of the boom’s ascent and then outwards again very minimally.

With the pallet forks, the Merlo tipped the load slightly inwards over the entire ascent. However the tip-out angle could have been a little larger.

The Merlo loader is powered by a 101hp Perkins engine using a hydrostatic drive from Sauer Danfoss. The transmission has mechanical reduction and this helps the first gear achieve a pushing power of 6.8t. Even in second gear it still manages more than 2.4t.

In first gear the loader can hit 14kph, which allows its substantial pushing power to be fully exploited during loading and still have a bit of speed in hand. In second gear 40 kph is possible, however to change gear the driver has to stop or fully push the inching pedal.

Selection of steering mode is via a simple lever. Unfortunately an indicator light showing the mid-positioning of the wheels is missing. The steering is light but high-geared – six turns of the wheel are needed from lock to lock. 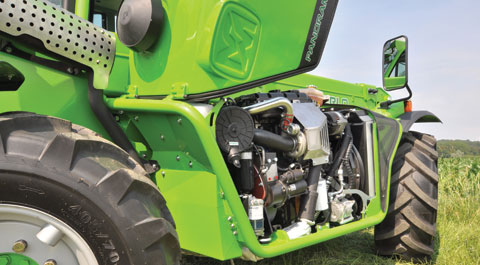 The brakes and inching pedal are fitted separately on this loader, however on slopes the inching pedal is not able to stop the vehicle completely.

Merlo employs a classic design and keeps the third service and boom controls on the joystick. Shuttle control is on the dashboard to the left of the steering wheel.

What’s good is that the lever is clearly marked in bright orange and has to be lifted slightly before activating. Meanwhile switches and other functions are grouped on the right-hand side.

But the arrangement is sometimes very confusing and functions are not always clear at first glance. However, the key switches are good and can be locked in their safest position for inexperienced drivers – overload security is a good example. 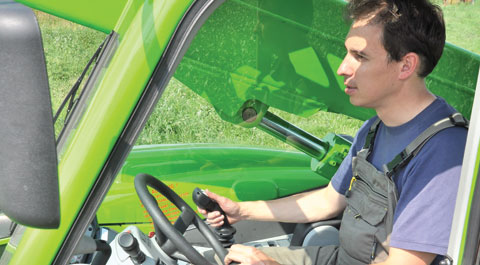 Integrating the lighting in the mudguards gives the handler a neat appearance from the front. In fact the whole machine radiates an impression of good design.

The Merlo windscreen stretches right into the roof, interrupted only by a thin silicon joint. This doesn’t present any visibility problems with the driver able to see the whole thing without having to squat lower in the seat. 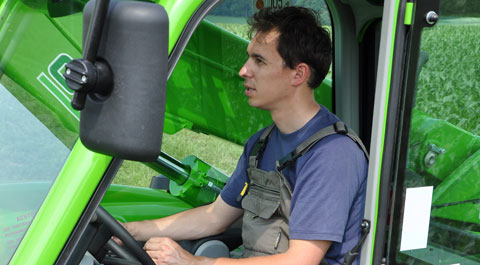 The big engine cover opens rearwards and leaves the whole engine easy to get at. That’s good. There’s also a large toolbox in the rear. Overall, the build quality of the Merlo was very good.