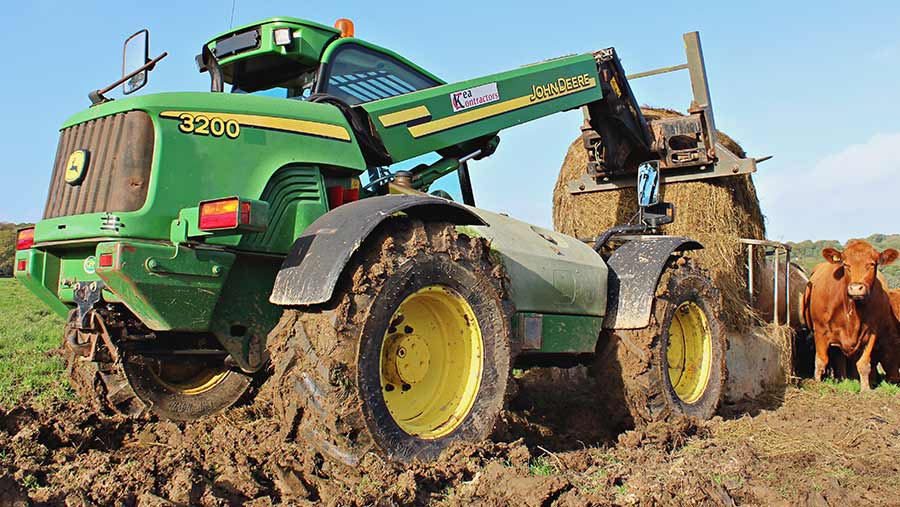 John Deere’s brief foray into the telehandler market lasted just six years and left a lot of customers scratching their heads, wondering why it pulled the plug on such a popular machine.

But although the Matbro-derived handlers had been successful in the UK, the maker said its decision to back out was based on a “detailed assessment of the worldwide market”, meaning it thought global demand wasn’t high enough at the time.

The first of the in-house-built 3000-series machines appeared in 2000 after John Deere purchased Matbro from parent company Powerscreen International, which had got into financial difficulty.

Up until that point, John Deere had had a marketing agreement to sell Matbro’s own machines in green.

Clearly the revamped loaders had plenty of the UK firm’s technology under the shell, but John Deere had redesigned the frame, boom, transmission and hydraulic system as well as adding its own engine and cab.

These were built at John Deere’s Zweibrucken factory, Germany – which, after telehandler production ceased in 2006, later concentrated on manufacturing combines and forage harvesters.

Since then, demand for the handlers has remained high, with loyal fans keeping them running and often using them in preference to newer machines on the fleet.

We caught up with Nick Johns of Cornish contracting firm Kea Contractors to see why he is still content running his 15-year-old 3200.

About eight years ago we were in the market for a second-hand telehandler, but we didn’t have a clue what to go for. Our neighbour already had a 3200 and raved about it so we though we would give one a go.

There weren’t many around, but eventually we found a really tidy 2002 model for sale in Wales that we thought had been working in a boatyard.

It had done roughly 4,700 hours of pretty easy work and we liked the sound of it.

For a machine that has done 7,500 hours it’s still very tight and smooth to drive.

That’s partly because it’s well put together, but it has also been driven fairly sensibly and been maintained properly – in our ownership anyway.

One of the best features (for a machine of that age) is the fact that it has hydraulic locking pins.

It’s the only telehandler we have and we are constantly switching attachments, so it’s a godsend really.

It’s not quite as compact or manoeuvrable as newer machines with side-mounted engines, but having all that weight at the back does seem to make it stable when lifting. It’s supposed to lift 2.8t, but it seems like it does more.

The brakes were notoriously sharp on these machines and the ones on ours are still capable of giving you whiplash. However, you soon get used to them and we’d much rather they be a bit abrupt than too weak.

What about the engine and transmission? 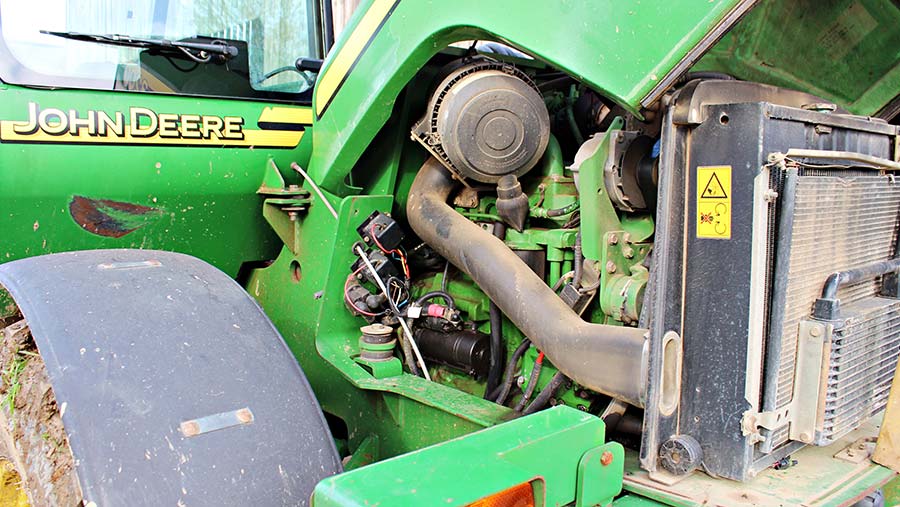 The engine is the same four-cylinder used in the 6310 and it’s one of its best attributes. It’s about 100hp, has bags of power and sounds lovely – it will probably still be going strong when the rest of the machine has given up.

The transmission is a fairly old-school torque converter with four manual gears. They can be shifted on the move by pressing an electric declutch button on the side of the gear lever.

It’s not as slick as more modern powershift and hydrostatic machines, but it’s perfectly adequate.

How does the interior measure up? 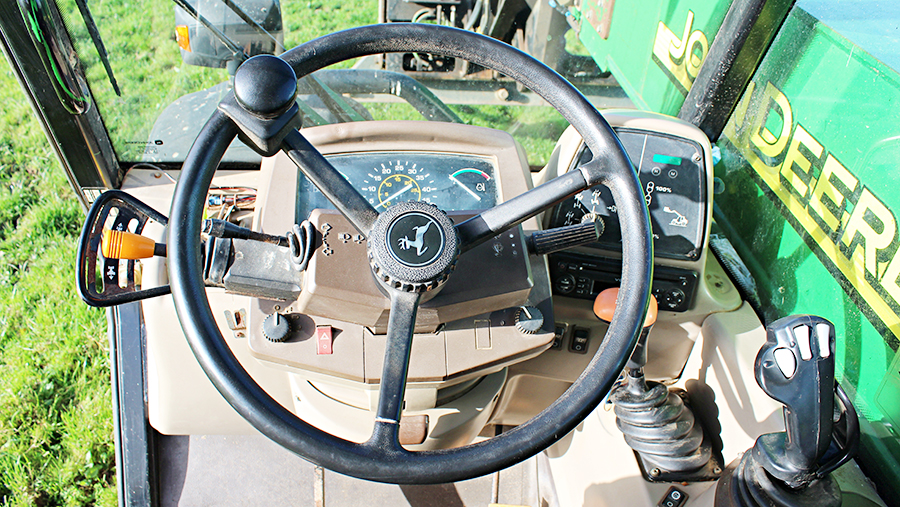 For its day it had a pretty plush interior, which was more tractor-like than telehandler. The dash console and dash pivot out of the way on a gas strut, just like the 6000-series tractors, and the rest of the controls are really well laid out.

It also has a good left-hand reverser and joystick. There’s no dump pedal fitted, but there is a button you can press in the side console, which does the same job.

One thing you do notice is that the boom sits a good bit higher than it does on newer side-engine machines, which means visibility to the right-hand side isn’t brilliant. The rear-mounted engine also means the boom’s pivot point is further forward.

Has it given you any problems?

The two most common problems you get with 3200 and 3400 telehandlers are poor starting (particularly in the winter) and joystick problems – we have had both.

We managed to cure the starting problem by replacing the starter motor and batteries.

However, before we did that we could usually get it to go by turning the steering wheel as we cranked it over. I’m not sure why it works, but it seems to be a common technique among other 3200 owners.

The joystick only started to play up this year, which isn’t bad for 15 years’ service.

The problem was that the wires for the top buttons run through the handle and over time chafe against bolts that hold the whole assembly together. Eventually they rub through enough so that they stop working. 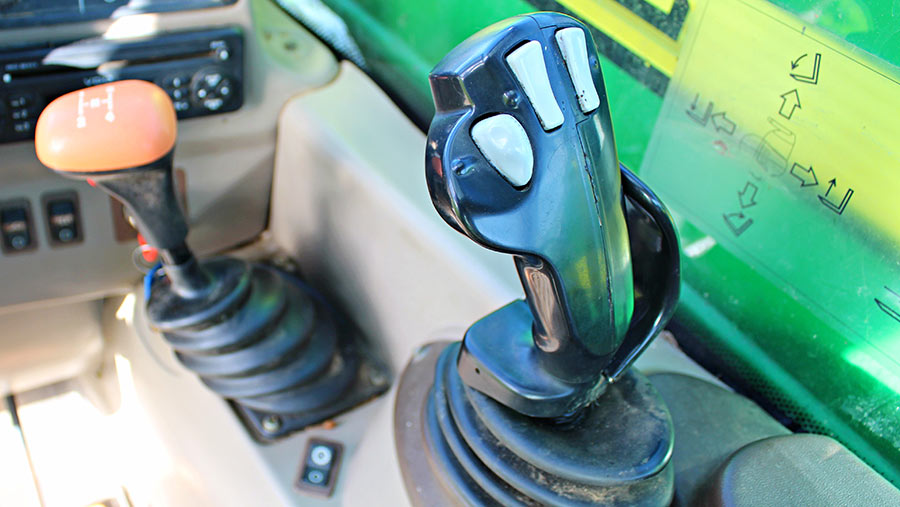 Luckily one of our local John Deere dealers, Smallridge Brothers, had spare parts in stock so that they could recondition it for us.

We haven’t had the bill yet, but hopefully it will be a good bit less than a new one, which is about £900.

We have also replaced the odd hydraulic hose and had to change the bearing at the base of the right-hand front kingpin.

The main lift ram also had a leaking seal, which we sent to Danser Hydraulics in Padstow to be fixed.

Are parts hard to come by?

Parts have never been a problem and both of our local John Deere dealers (Cornwall Farm Machinery and Smallridge Brothers) seem really keen to help out and do work on it.

In most cases we have been able to replace worn-out parts with genuine John Deere replacements. Surprisingly, they haven’t been that expensive either.

However, we have been warned that we could be in for a seriously big bill if we get problems with the steering mode sensors. If they give up completely and need to be replaced the cost can run to about £6,000.

We have also just replaced the tyres for a set of BKTs, which set us back £1,500. That was considerably less than a lot of the other brands, though.

The bottom section of the glass door swings out only 90deg so you can’t clip it back out of the way. It’s also pretty fragile as we found out when we clipped the door handle on a post and smashed it.

There’s also no boom suspension, which makes the ride a bit harsh on bumpy ground. However, most of our work is around the yard, so it’s not really a problem.

If we could find a good one at a reasonable price we would definitely be interested. Ideally we’d like one of the later and slightly bigger 3420 models. They can lift 3t and have a considerably longer 7.12m reach.

They can be seriously expensive, though, and very hard to find in good order. Recently we spotted an immaculate one for sale that had an asking price of more than £45,000.

Claas and Kramer’s telehandler partnership is coming to an end this year and as a result a number of prominent John Deere dealers will start selling the green-and-grey machines.

These are identical to the Claas Scorpion – which was built entirely by Kramer – and there are nine models, ranging from the KT276 with a 2.7t lift, up to the biggest KT559 with a 5.5t lift and 9m reach.