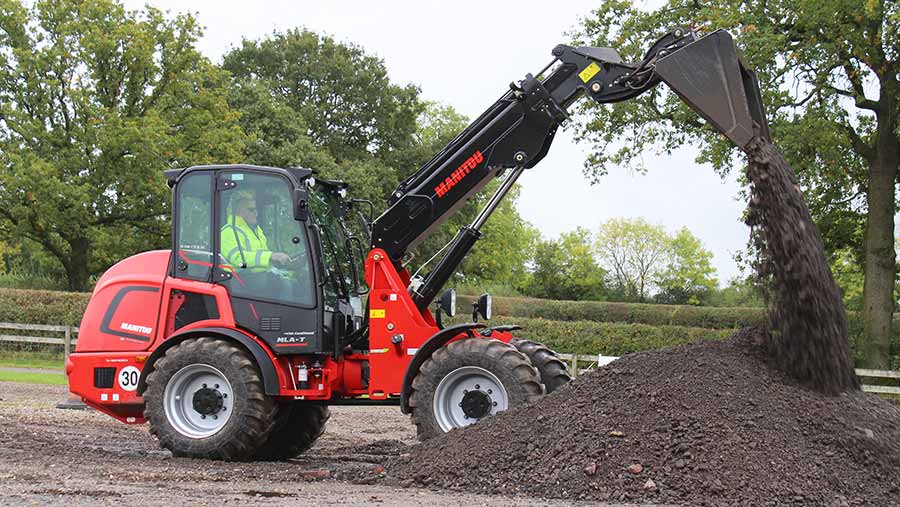 Manitou has owned the Gehl and Mustang compact loader brands for more than a decade, but has only recently made the decision to start selling these machines in its own livery.

The change has seriously bulked out the bottom end of Manitou’s product range, but the fact that many of these machines are very compact means there are only a few suited to conventional agricultural tasks.

In total, the rebranding has furnished the Manitou catalogue with 11 skid-steers, eight tracked versions (of largely the same models), six wheel loaders and one ag-spec telescopic pivot-steer loader.

See also: On test: Manitou returns to pivot market with its MLA-T

All of the additional models are built in the US – pivot-steers are put together in Waco, Texas; skid-steers in Madison, Wisconsin; and tracked models in Yankton, South Dakota.

Mustang is the only loser in this arrangement as Manitou has decided to drop the brand altogether.

Gehl is staying, but the yellow machines will go mainly into the construction market, through Yorkshire importer and distributor Filtermech Plant Sales.

The MLA-T 516 75H compact pivot-steer loader is the model most likely to find its way into a farmyard.

Manitou is billing it as a suitable replacement for the much-loved Matbro TR200, and judging by the spec sheet, lift capacity and reach are in the same ballpark.

However, the power output at 75hp isn’t quite in line with the Matbro’s 94hp.

Underneath the paintwork, the 516 is basically a Gehl ALT750, which has been around for a couple of years.

Headline performance figures include a maximum payload of 1.6t (at full steering lock), a maximum lift height of 5m and that 75hp power output.

Its relatively compact proportions – 1.74m wide, 4.95m long and 2.48m high – mean it’ll tuck into some fairly tight spaces, but the cab will be a little on the lofty side for some pokey buildings.

Its introduction brings the number of pivot-steer telescopic loaders in the Manitou stable to two. The existing model is the MLA-T 533-145 V+, which has a 143hp engine, 3.3t maximum payload and 5.2m lift height. 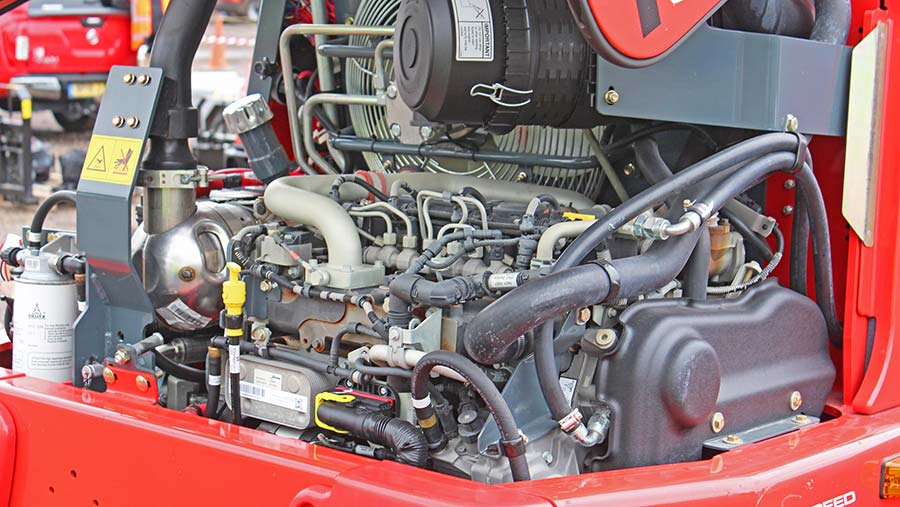 The MLA-T-516 gets its 75hp from a 3.6-litre Deutz four-cylinder engine which drives a simple hydrostatic transmission.

This doesn’t have any mechanical gearing, but there are three speed ranges which work by progressively reducing swash plate deflection in the hydrostatic motor.

It’s a decent enough setup for a machine of this size, where the added efficiency of a more mechanical setup isn’t necessary. The top speed of 30kph is also about right – smaller models have a two-speed motor and are limited to 20kph.

Gehl’s engineers appear to have taken engine cooling pretty seriously, with a large air intake that draws air from the sides (just behind the cab) and exhausts it through the back grille.

There’s also a variable speed, reversible hydraulic fan fitted as standard, which is operated via a switch on the dash.

The only downside is that the large air cavity between the cab and engine looks like it will serve as a popular congregation point for dust and debris. Thankfully, the side panels are easy to remove if it does become clogged.

In a bid to minimise tyre scuffing, Gehl opted for manual locking diffs rather than limited-slip units, engaged by pressing and holding a button on the joystick.

Compared with its bigger brother, the 516’s cab is a little on the cosy side. However, it has a flat floor and Manitou is offering three levels of interior finish, so those who like the little extras can get it to a fairly high spec.

At the moment, production models are being fitted with Gehl’s standard armrest-mounted joystick, which is a fairly typical arrangement.

However, Manitou has fitted a test model with its distinctive JSM controller and this could be rolled out to all models.

This groups all functions into a palm-shaped controller with the forward/reverse shuttle incorporated into a button on the top. It takes a bit of getting used to, but is pretty slick once the involuntary grabbing for the left-hand reverser starts to wane.

For jobs that require constant revs and hydraulic output, there’s a simple-but-effective hand throttle dial. When this is turned, it automatically converts the foot pedal into a speed controller – ideal for running down a feed passage.

There’s also a combined brake and inching pedal, which means the engine can be revved up to get better hydraulic flow without needing to knock it into neutral.

The telescopic boom offers a max lift height of 5.03m (measured at the bucket hinge) and it’s rated to a 1.6t payload. However, if the wheels are kept straight this goes up to 3.4t. 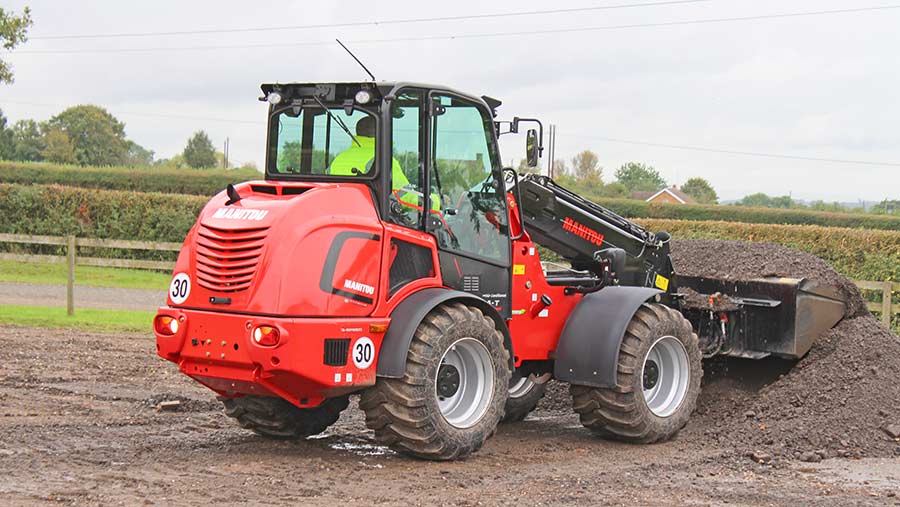 There’s also a Z-bar linkage between the boom and the headstock to improve the breakout force. Thanks to it being classed as a wheel loader rather than a telescopic handler, there are no safety lockouts, so it’s easy to make full use of its capacity.

If Mustang and Gehl sales figures are anything to go by, the 1650R will be the most popular of Manitou’s skid steers for the agricultural market.

This sits roughly in the middle of the line-up, with a 69hp Yanmar engine that powers a hydrostatic motor on each side. Heavy-duty, splash-lubricated roller chains then take the drive to the front and rear wheels.

As standard, the 1650R comes with single-speed drive, but there is the option to upgrade this to a dual-speed setup, which increases the maximum speed to 20kph. It can also be specced with road lights for short jaunts on the road.

The traditional radial loader arms (high pivot point behind the cab) offer a 3.02m lift height and rated lift capacity of 748kg. Buyers also get the option of adding hydraulic self-levelling, which can be switched on and off from the cab. 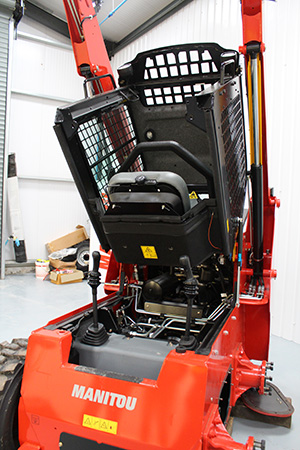 Four different control layouts are on offer – the Bobcat-style hand and foot setup is the most popular, but there’s the option of T-bar arrangement, manual dual hand controls or dual joysticks.

Here, Manitou has opted to use low-pressure hydraulics rather than electric controls, to give better feel and more control.

Recent updates include moving the cab forward in the chassis and raising the seat height to give better visibility. The profile of the lift arms has also been reduced to improve visibility to the sides.

To ease maintenance, the cab lifts up on gas struts, allowing access to the pumps, hydraulic valve block and drive motors. There’s also a full-width rear door that opens out the engine bay, as well as swing-out coolers for easier cleaning.