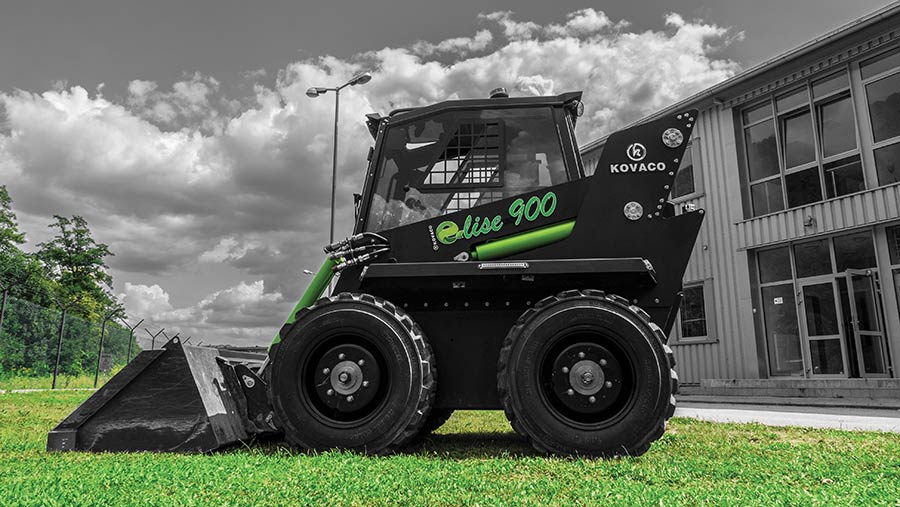 Kovaco’s Elise 900 runs emissions-free from a 240Ah battery that delivers an output of roughly 40hp for up to six hours on a single charge.

It takes five hours to recharge, but there’s also the option of speccing a bigger 400Ah battery that can provide up to eight hours of runtime.

The battery powers three motors, two of which handle the machine’s movements.

A planetary gearbox in each wheel winds down the high speed of the electric motor to a modest-sounding 13kph maximum travel speed.

The third motor is used to power the hydraulic system that provides an oil flow of 65 litres/min.

Kovaco makes some 30 attachments for the Elise, including road sweepers, buckets and a 180deg digging arm. It also comes with a towing eye.

Remote control operation is possible via a dedicated mobile app, which doubles up as an in-cab display and has a 15m range.

However, this function is likely to prove more useful on construction sites, where the company expects the machine to be a big hit, primarily because of its near-silent operation.

List price for a farm-spec machine is about £50,000, but UK agents Paul and Finlay Bassett expect buyers to be able to claim up to 40% of that back through the government’s Innovate UK grant.