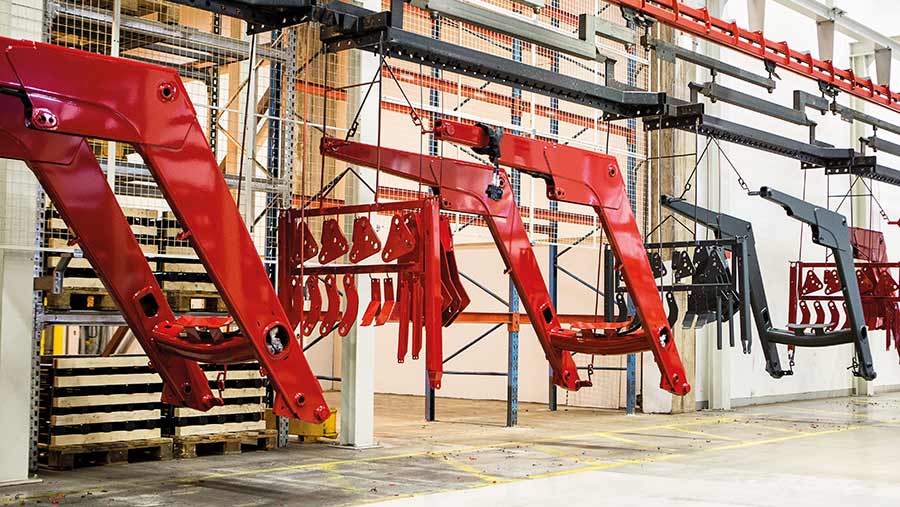 Tractor loaders, wheeled loaders and telehandlers of all sizes, from ultra-compact to ultra-heavyweight, have become indispensable providers of muscle for contractors and farms large and small.

The shift from pitchforks and pulleys has created a whole new industry, producing machines for mucking out cattle sheds, filling grain lorries, stacking bales and pallet boxes, sweeping yards and performing any number of other tasks quickly, efficiently and in comfort.

Equipment used by UK contractors and farmers mostly comes from factories located in Europe and Scandinavia, with skid-steer loaders predominantly sourced from the US, where there is a vast market for them – primarily in construction and landscaping, but also in livestock farming.

Meanwhile, China’s huge construction programmes of late have spawned numerous wheeled loader makers, and a handful of their products are now available in Britain.

Click on the icons below in the map to see where the loaders are made and read the full report below.

The world’s largest manufacturer of tractor loaders – including its own Quicke and Trima brands – has its headquarters and main manufacturing plant in Brannland, close to the town of Umea, eastern Sweden.

Subframes are engineered and manufactured by the Agroma subsidiary in western France (and also in the US for the North American market), while buckets, forks and other attachments are produced close to the port city of Ningbo in eastern China.

Owned by German manufacturer Jost Group since early 2020, Alo builds loaders for tractors up to 280hp and supplies OEM brand loaders to Agco’s Massey Ferguson and Valtra tractors, as well as Zetor.

As the popularity of compact wheeled loaders has grown, so has Avant Tecno’s factory output, rising from one a day in the early years to one an hour today at a facility in south-west Finland. The range covers lift capacities from just 350kg to 1,900kg and includes telescopic boom models.

The company is part of a group that also makes Blaney farm equipment, Quad-X ATV products and Load-X loader attachments.

As one of the globe’s most prolific  producers of compact machinery for construction, landscaping and agriculture, Doosan Bobcat products available in Europe include a newly introduced diddy wheel loader and the familiar skid-steers built in separate factories in North Dakota, US.

The European headquarters in Dobris, Czech Republic, has just started building a 5t compact wheel loader on a new assembly line with capacity for 1,000 units/year.

In France, the telescopic handler plant at Pontchateau in the north-west of the country has been upgraded to help double output of Bobcat telehandlers (which are also supplied in Massey Ferguson colours) over the next five years. 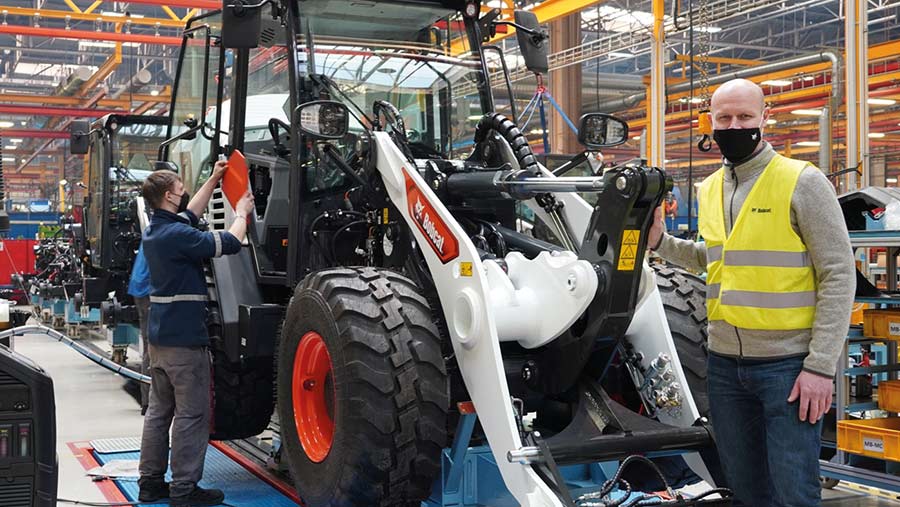 This is a brand used by Linyi Huaya Machinery Co for the wheel loaders built at its Sangangdianzi factory in Shandong province, eastern China, and distributed in the UK by J Bourne Tractors near Leek, Staffordshire. 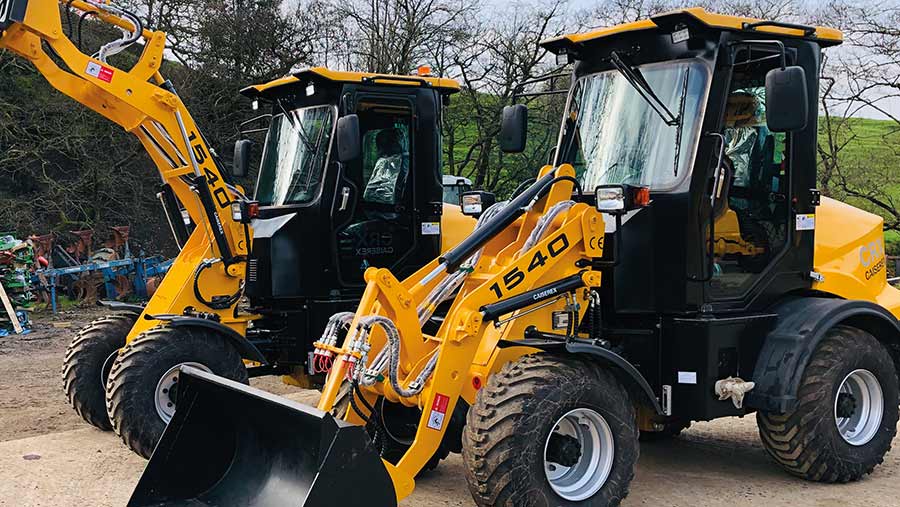 The 2.5-4.2t full-size telescopic handlers in the Case IH range are built at the CNH Industrial group factory in Leece, southern Italy.

Case’s LRZ fore-end loaders are sourced through an OEM agreement with Stoll and the five models span 70hp to 180hp machines.

Since switching its OEM supply agreement for agricultural telescopic handlers from Kramer to construction machinery giant Liebherr, the machines have been built at Telfs, west of Innsbruck, Austria.

The new articulated telescopic loader and full-size conventional loading shovels are assembled 130 miles to the east at Bischofshofen. Claas-branded tractor loaders are sourced through a supply agreement with MX.

One of Italy’s main manufacturers of telescopic handlers and wheeled loaders builds its machines in a factory complex at Montecchio Emilia, north-west of Bologna.

The agricultural range encompasses telehandlers with 2t to 7.5t lift capacities, while the four-model range of articulated teleloaders peaks at 5.7t. 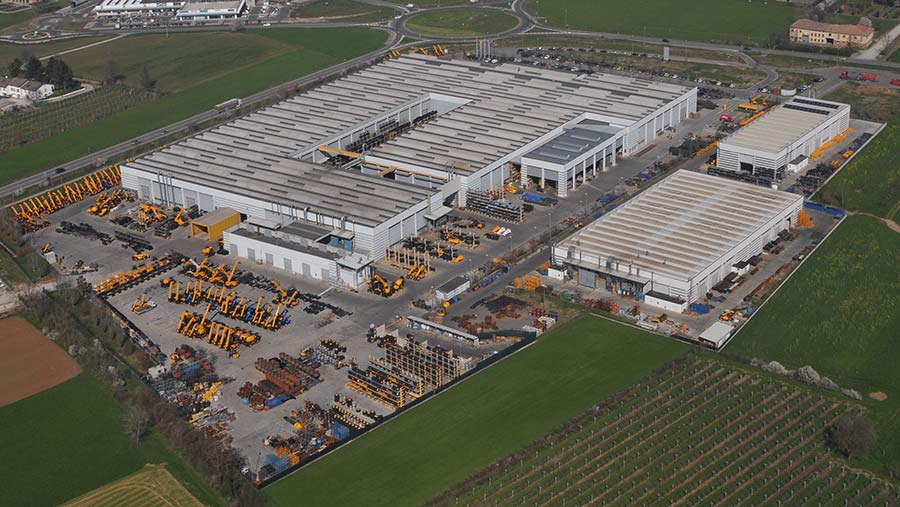 Production of telescopic handlers was introduced by Faresin Industries to complement its comprehensive range of diet feeders.

Both are manufactured at the company’s Breganze factory in northern Italy.

Its Straubing factory is 150 miles north-east of the Marktoberdorf tractor plant in Bavaria, southern Germany, where Fendt also builds its eight-model range of Cargo hydraulic loaders for the 200 to 700 Vario tractors.

The loader range available through a handful of UK dealers caters for tractors from 40hp to 280hp and includes the new XB Bionic design with the levelling linkage and dump/crowd rams housed within the lift arms.

This is the English brand name carried by a range of compact wheeled loaders built by Qingdao Hechang Machinery Manufacturing Co in Qingdao, eastern China, and distributed in Britain by North Norfolk Vehicle Services.

The 0.5-2.3t-capacity hydraulic loaders – plus attachments and front linkage kits – produced by this Polish manufacturer are distributed in the UK by Browns of Liversedge alongside Belarus tractors.

The largest and most diverse range of agricultural materials handling products – ranging from ultra-compact wheeled loaders and telescopic forklifts to high-lift handlers and loading shovels for industrial-scale fertiliser and grain stores – is produced by JCB in a number of Staffordshire factories.

While Loadall telehandlers are built in the World Headquarters plant at Rocester, the diesel and electric Teletruk telescopic forklifts are produced by JCB Compact Products nine miles to the north-west at Cheadle.

In a separate plant on the same site, JCB Earthmovers builds telescopic and conventional wheeled loaders, while attachments are engineered close to Uttoxeter.

Compact tracked and skid-steer loaders, including the Teleskid telescopic boom models, are shipped from JCB’s North American factory close to the coastal city of Savannah, Georgia, south-eastern US. 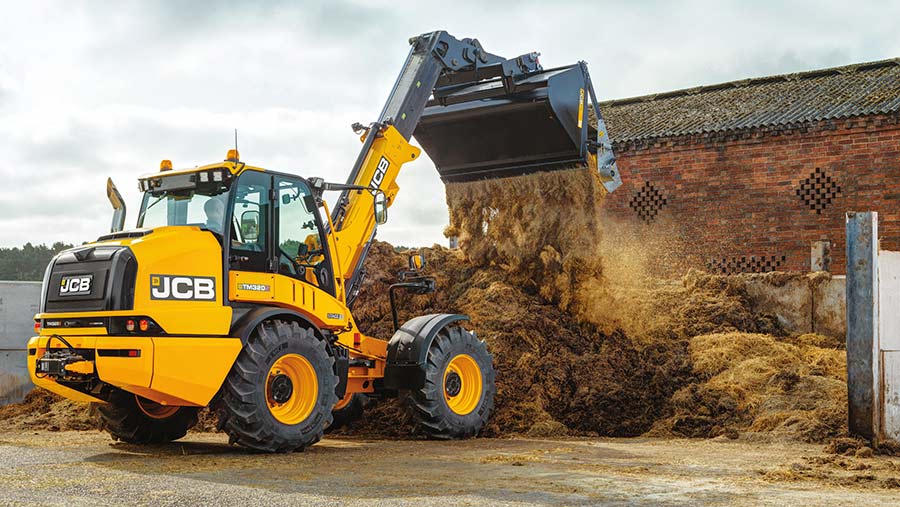 Hydraulic loaders for John Deere tractors up to the 6R-models are manufactured at the company’s Arc-lès-Gray factory north of Lyon, eastern France. But for compact tractors and for the 7R and 8R machines, they are sourced from a John Deere factory complex in Ramos, northern Mexico.

Daedong Industries, the South Korean manufacturer of Kioti tractors, makes some hydraulic loaders itself at the Daegu factory in the south-east, but sources the majority from loader specialist Taesung Manufacturing in the north of the country.

These compact wheel loaders – both conventional and telescopic – are constructed by manufacturer Gebroeders Geens at a factory in Hoogstraten, 23 miles north-east of Antwerp, Belgium.

This Slovakian engineering firm builds what is thought to be the first all-electric skid-steer loader – the Elise 900 – alongside a stand-on or remote-control tracked loader at its factory in Veľká Lehota, 95 miles north-east of Bratislava.

The Kramer-Werke operation in Pfullendorf, south-west Germany, manufactures compact and full-size telescopic handlers, as well as a range of compact four-wheel-steer loaders for agricultural and construction use.

The products comprise wheeled loaders from 1.9t to more than 11t operating weight, a four-model range of telescopic versions from 4.3t upwards, and both ultra-compact and full-size telehandlers with up to 5.5t lift capacity.

One model of hydraulic loader for Kubota M6002 and M7003 tractors is sourced through an OEM supply agreement with MX but all others are built at Kubota’s industrial equipment operation in Jefferson near Atlanta, Georgia in the USA.

An OEM supply agreement with Dutch firm Toboroco Giant formed the foundations of Kubota’s compact wheeled loader range, but the current models available in the UK are built by the company’s construction machinery operation in Zweibrucken, south-western Germany. 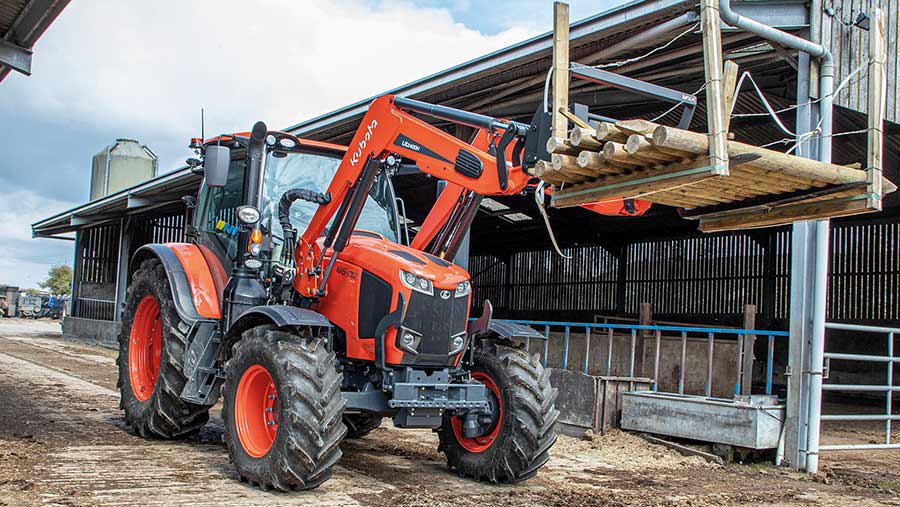 The manufacturer, based in Loudun, 96 miles east of Nantes, north-west France, produces a comprehensive range of hydraulic loaders for tractors from 40hp to more than 150hp, as well as loader and telehandler attachments.

Manip’ – a subsidiary of the M-Extend holding company that also owns fellow loader manufacturer MX – is also the OEM supplier of loaders for Landini and McCormick products produced by Argo Tractors.

The headquarters and main production site for Manitou’s extensive range of agricultural and construction telescopic handlers is at Ancenis, 60 miles south of Rennes in Brittany, north-west France.

While the full-size MLT630 to MLT1041 models are built there, the compact MLT420 and MLT625 are produced in a satellite factory in Laille, just south of Rennes.

The smaller MLA-T516 originates from Gehl – part of the Manitou Group – and is built in Madison, South Dakota, alongside the Gehl/Mustang skid-steer loaders, newly adopted as Manitou products in Europe. 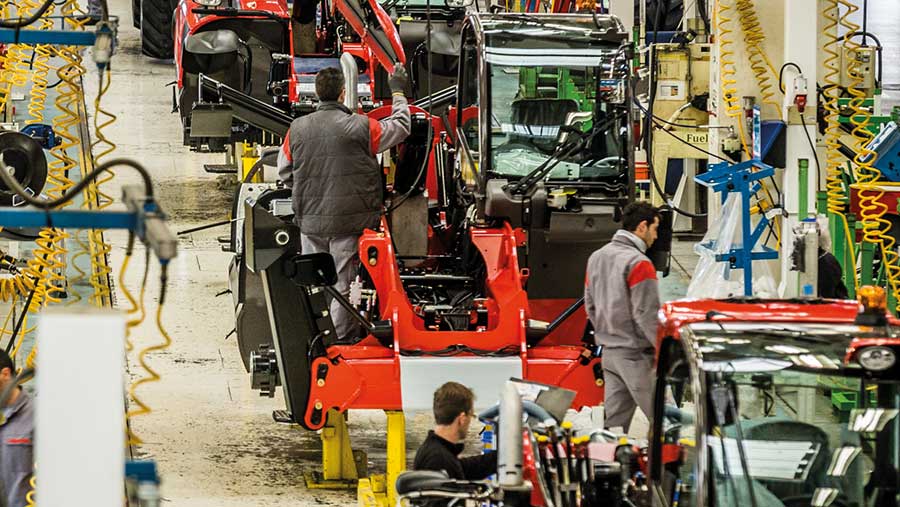 This Polish manufacturer of tractor loaders, supplied in Britain by TCF Engineering, caters for numerous makes and models up to 200hp at its Gałkówka base, 100 miles north-east of Warsaw.

All Merlo telescopic handlers are built in the company’s Defendente di Cervasca factory near Cuneo in the south-west corner of northern Italy.

The range extends from the compact Panoramic P27.6 to the range-topping TurboFarmer TF65.9, and also includes the novel MultiFarmer tractor/handler models with rear implement linkage and pto.

The manufacturer of mini conventional and telescopic wheeled loaders, and a new range of compact models, is based at Grumolo delle Abbadesse, a small town 36 miles west of Venice in north-east Italy.

Based in Acigné on the north-eastern outskirts of Rennes, north-west France, MX is one of Europe’s largest hydraulic loader manufacturers, with models covering everything from 15hp compact models to the TX425 designed for 200-400hp tractors.

The company also manufactures loader attachments and front linkage assemblies, plus a modular weight block. In addition to its own MX brand loaders, there are OEM supply agreements with Claas and Iseki, and with Kubota for M6002 and M7003 tractors.

While TL hydraulic loaders for New Holland tractors from 70hp to 180hp are supplied to the factories by Stoll, the eight-model TH telehandler range is built in a CNH Industrial plant in Lecce towards the very south of Italy.

The four compact and four full-size wheeled loaders adopted for agricultural applications are also built in this plant, while New Holland skid-steer loaders come from CNH’s Wichita factory in Kansas, US.

A factory complex in Erwitte, north-west Germany, is the sole manufacturing location for the compact conventional and telescopic wheeled loaders produced by Schaffer. 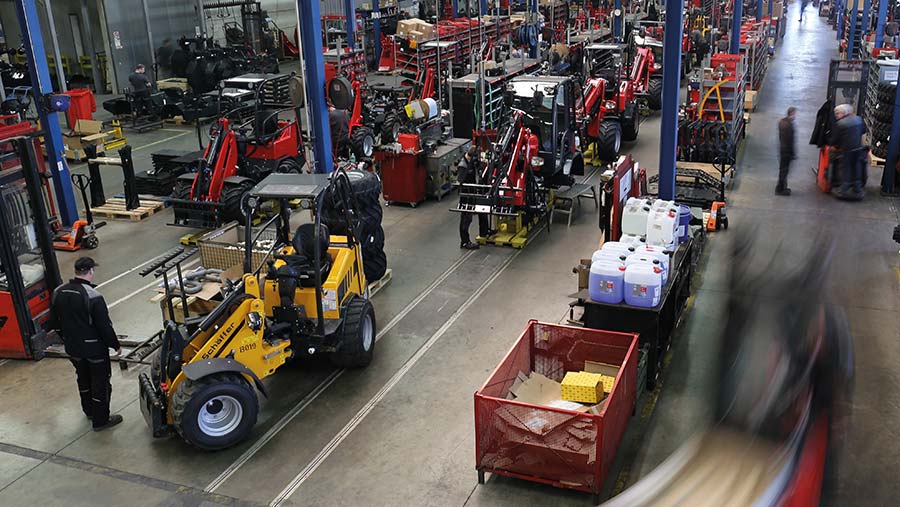 Hydraulic loader manufacturer Sigma 4 – which claims to be the Italian market leader – produces a range of models spanning tractors from 45hp to 250hp. 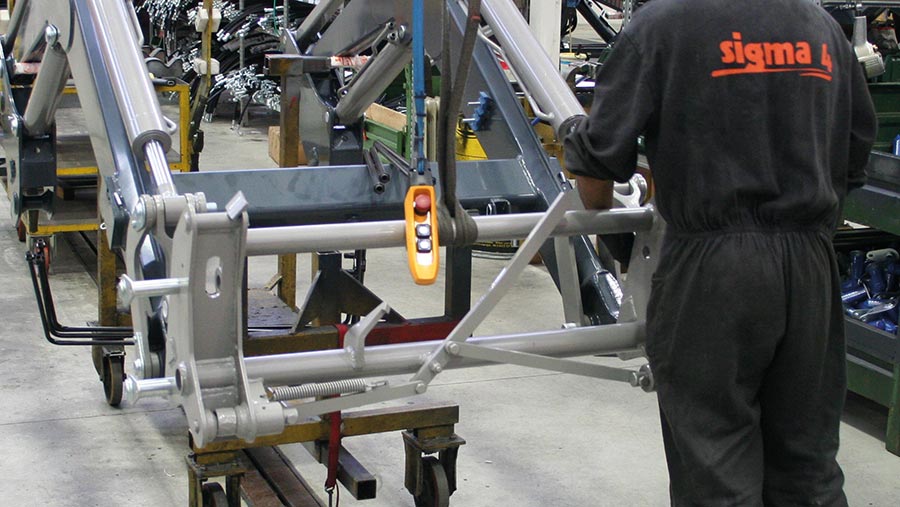 The main factory of Wilhelm Stoll in Lengede, 36 miles south-east of Hanover, once produced sugar beet and haymaking machinery, but for the past 20 years or so has focused on hydraulic loaders as Germany’s largest manufacturer of such equipment.

Subframes are built at subsidiary Metex, 58 miles to the east of the main plant, while attachments are manufactured at Stoll Poland in the north of the country.

The Stoll range caters for tractors of more than 300hp and everything down to small compacts, as well as a range of attachments. The company has OEM agreements with CNH for supplying Case IH and New Holland tractor factories, and with SDF Group for Deutz-Fahr and Same tractors.

The 25-year-old Dutch company is one of the fastest-growing in its sector, with its compact loaders now stretching to the 5t operating weight class, some of them built for Kubota’s light construction machine range, while the telescopic versions span 0.75-2.8t lift capacities.

The loaders are built at Oisterwijk, in the south of the Netherlands, in a recently expanded factory where the company’s compact telescopic handler and stand-on skid-steer loaders are also assembled.

This Italian manufacturer of compact and full-size rigid-boom and telescopic wheeled loaders is located in Lugo, between Bologna and Ravenna, on the north-east coast.

The range comprises 3.6-6.2t compact machines and full-size loading shovels from 8.3t, and a pair of articulated telescopic models with 1.25t and 3.2t lift capacities.

The wheeled loaders produced by Volvo CE for agricultural use are manufactured either in Arvika, south-west Sweden – models from the 12t L60H to the 19t L120H – or Konz in Germany, close to the Luxembourg border, in the case of the mid-size 8.8t and 9.5t L45H and L50H machines.

Production of conventional and telescopic wheeled loaders has been consolidated at a single site at Korbach, north-west Germany.

Weidemann, which is part of the Wacker Neuson Group, is focused on the agricultural market with its compact Hoftrac articulated loaders from 1.6t to 3.4t operating weight, and the mid-range 3.9-10.7t machines with their telescopic boom counterparts.