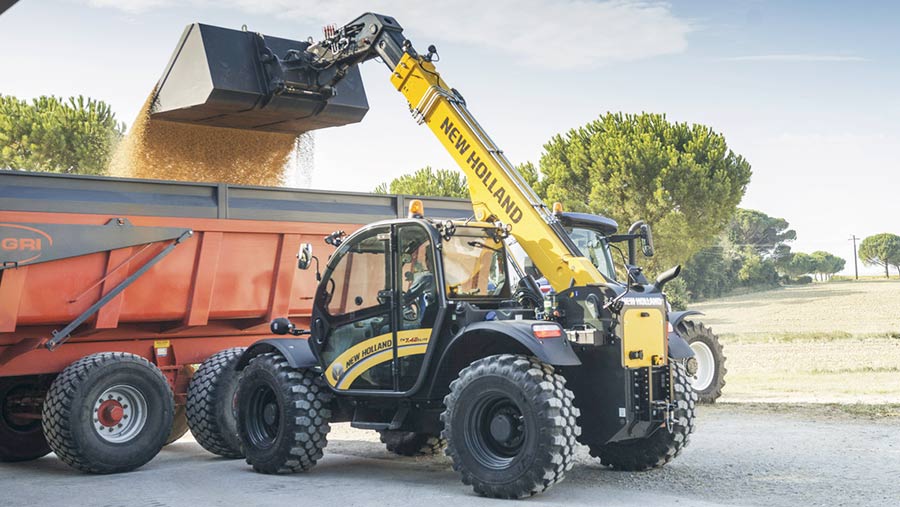 New Holland’s telehandler range has been given a fresh livery, a new name and a handful of internal tweaks that the company hopes will help it climb into the UK telehandler market’s top five.

Things are apparently going well, with New Holland claiming to have sold as many in the first half of this year as in the whole of 2018.

Now yellow in colour and branded TH (the previous LMs were blue), the biggest mechanical alteration is a switch in gearbox and axle provider. Carraro has taken over from ZF, which keeps production fairly simple as the same transmission is fitted to New Holland’s backhoe loaders.

The company says the new gearbox offers a more even spread of speeds and a marginal improvement in power take-up, which may be noticeable when towing or working on the clamp.

However, it still has six forward speeds and can be run in three driving modes – manual, auto shifting in gears two to four (where it revs a bit harder before making upshifts), and full auto for transport.

For more details on price and spec, see our Ultimate guide to buying a telehandler 2019

The TH machines carry the same 4.5-litre FPT engine as New Holland’s T6 tractors. This relies solely on AdBlue for emissions control, with higher spec models kicking out 146hp and the smaller ones making do with a still decent 133hp.

More expensive versions get a 140-litres/min hydraulic pump with performance claimed to match comparable JCB machines, despite not using a regenerative hydraulic system when lowering the headstock.

There are also two compact machines (the 526 and 628) built by Dieci – an arrangement that will continue now that the two companies have penned a fresh five-year contract.