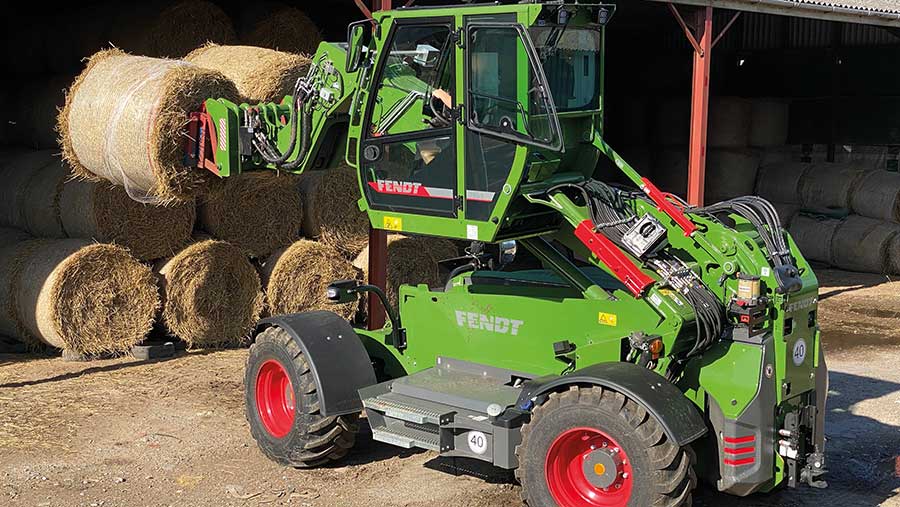 Not since the launch of JCB’s mid-engined, four-wheel steering Loadalls over 30 years ago has a telehandler defied convention quite like Fendt’s debut Cargo T955.

But these luxuries come at a cost and the staggering £200,000 list price of a well-specced machine not only puts it beyond most of the firm’s tractor-buying customers – who themselves aren’t short of financial firepower – but almost out of farming reach altogether.

Instead, the company is heading to docks, straw sellers, AD plants, commercial grain stores and feed merchants, hoping to rack up enough sales to justify expanding the range with models that will appeal to regular farmers and contractors.

To dodge the multimillion-pound commitment in research and development, Fendt has taken the same low-risk route to market as most of its rivals by simply redressing an existing machine.

Agco stablemate Massey Ferguson did it with Bobcat, as did Claas – first with Kramer and, latterly, Liebherr.

It’s not without its risks, though, as John Deere found out at the start of the millennium with its ill-fated venture into telehandlers.

But while John Deere began on a sound footing using Matbro loaders with a strong UK following – albeit let down by a lack of global demand – Fendt has partnered up with little-known Sennebogen.

The Munich-based company specialises in building colossal 400t lifting rigs to shift dockside cargo and didn’t develop its own telehandler until 2003. Until now, it’s been nowhere near farming.

It doesn’t do small, either, so even the ‘dinkiest’ model in the range – the one Fendt is selling in the UK – weighs almost 12t, reaches to 8.5m and will lift 5.5t. That rules out any immediate involvement in the 7m, 3.5t sector that would dovetail neatly with most of its tractor customers.

All that metal costs money, and it’s a large part of the reason why a barebones Cargo T starts at £165,000 and climbs by the thousand as the extras (of which there are plenty) are added.

That slims down an already niche market to just a few vast outfits, most likely on the periphery of agriculture.

However, competition will be stiff and there are already plenty of big fish patrolling what is a very small pond.

The main telehandler protagonists – JCB, Manitou, Merlo, Kramer and Claas – offer rival high-capacity machines, and it will also be entering the domain of loading shovels with far greater lifting capacity and tear-out force.

Watch the video of the machine in action and read the rest of the test below and see how it compares to its rivals.

Is it a Fendt?

In livery only. The rebadged Sennebogen is Fendt’s guinea pig and it needs to sell a few before it is willing to commit to any expensive improvements.

The narrow, boxy cab and lack of trim to cover the steel frame are distinctly un-Fendt-like and will be a mighty disappointment to anyone with experience of the firm’s premium-spec tractors.

Most of the switches have been left wherever the engineering department plonked them, and vague labelling will inevitably leave untrained operators thumbing through the manual for clues.

The stand-out positive is the proportional joystick – a smooth, delicately weighted affair that carries all the essential controls, including the forward/reverse shuttle.

But, where buyers might have expected one of Fendt’s fancy Vario monitors, there’s a comparatively crude display offering just a handful of engine and transmission-related digital readouts. 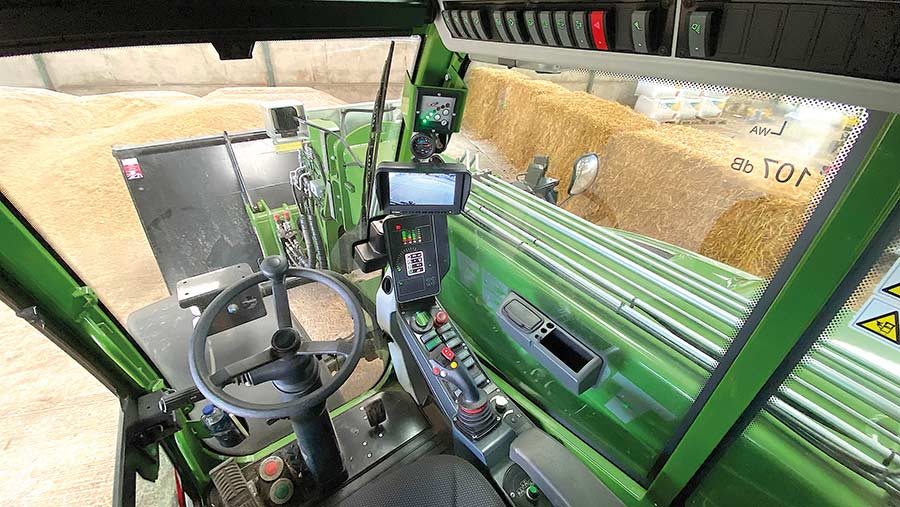 That means there’s no capacity to monitor load weights – something that buyers might reasonably expect for their £165k.

Though it has resulted in an unusually roomy engine bay and particularly high boom pivot, views to the right are dire and reversing relies on a rear-facing camera.

This is where the lifting cab comes into play. Jacking it up using sticky foot-operated buttons not only engages nitrogen accumulators to provide cloud-like cab cushioning but also gives a vastly improved vantage point.

For the most part, a 50cm rise is adequate, but where ceiling space and vertigo are not issues it can levitate 4.25m from the ground.

Though Fendt insists the high-ride mode has little impact on the centre of gravity, the sway caused by driving over anything other than billiard-board concrete makes it a buttock-clenching experience.

To make this function more useful, operators would need to pre-set a couple of heights, one close to the ground for scooping and a higher second for tipping.

This would help them maintain visual reference points at each position to improve distance perception, which is already tricky because of the Cargo’s sheer size. Unfortunately, this feature is not available.

Views through the full-height front window are much better and the combine-style, between-the-legs steering column makes for a comfortable driving position. However, the limited space means it can’t pivot far enough to allow for an easy exit, especially for anyone with a big belly.

The door doesn’t automatically lock with the cab raised, either – something tired operators will need to remember to avoid breaking a leg when they climb out at the end of the day. 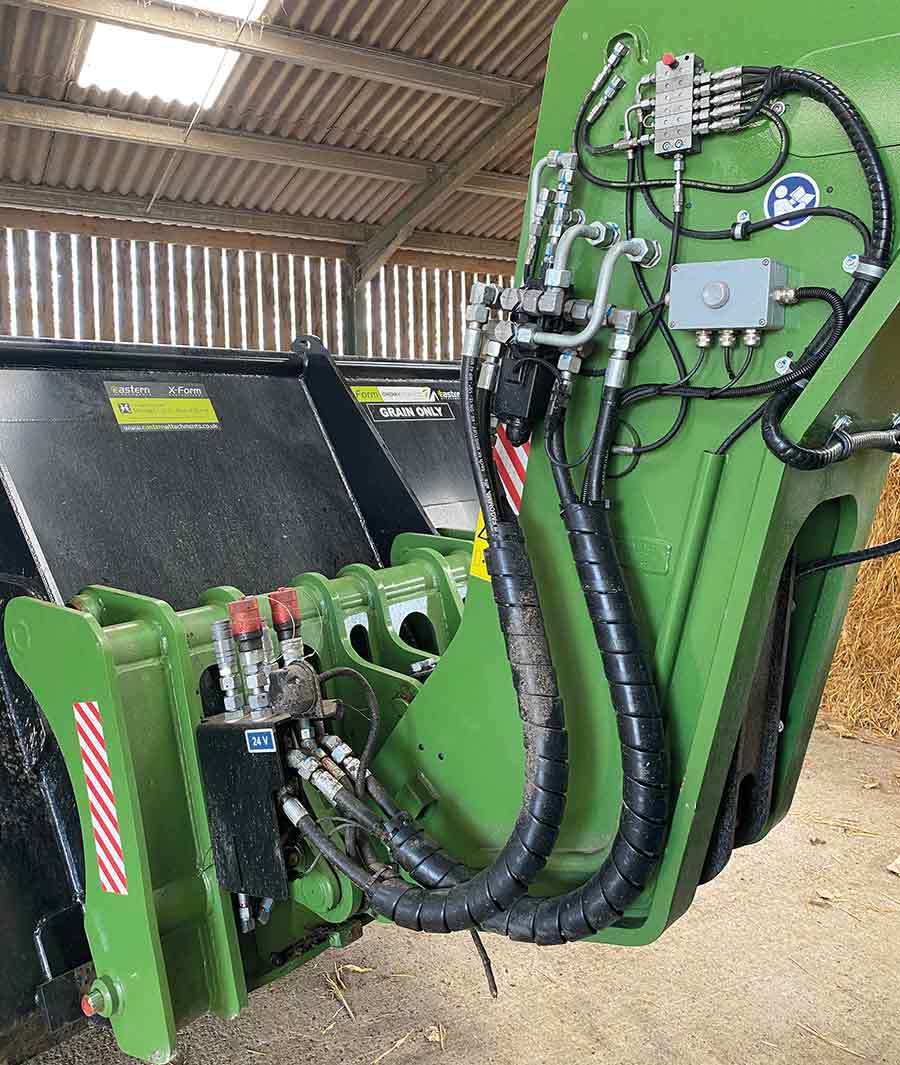 The Cargo unveiled at Agritechnica had an FPT engine, but Stage 5 emissions regulations forced a late switch to four-cylinder Cummins power.

The 4.5-litre block is tuned to 167hp and is kept clean using a combination of SCR, AdBlue and a particulate filter, as well as a stop/start function to reduce engine idle time.

Plans to add a six-pot lump were mooted at the launch and it’s something we reckon is worth pursuing.

Though in its current guise it is still one of the most powerful and torquey on the market, the 11.8t unladen weight was often a factor in running out of puff on moderate inclines, quickly strangling the 40kph top road speed around 30kph.

Drive to the hydrostatic transmission can be disengaged with a light press on the foot brake – there’s no declutch button on the joystick – and a heavier boot engages the anchors.

It’s a system that works well and allows the engine to be revved up to improve hydraulic cycle times.

Engine and transmission characteristics can also be altered by switching drive modes.

A ‘road’ setting locks the hydraulics above 20kph and sets the machine to front-wheel steer, ‘bucket’ sends maximum power to the hydraulic pump to guarantee fast lifting and maximum tear-out force, and ‘pallet’ limits the engine to 1,200rpm for delicate work. 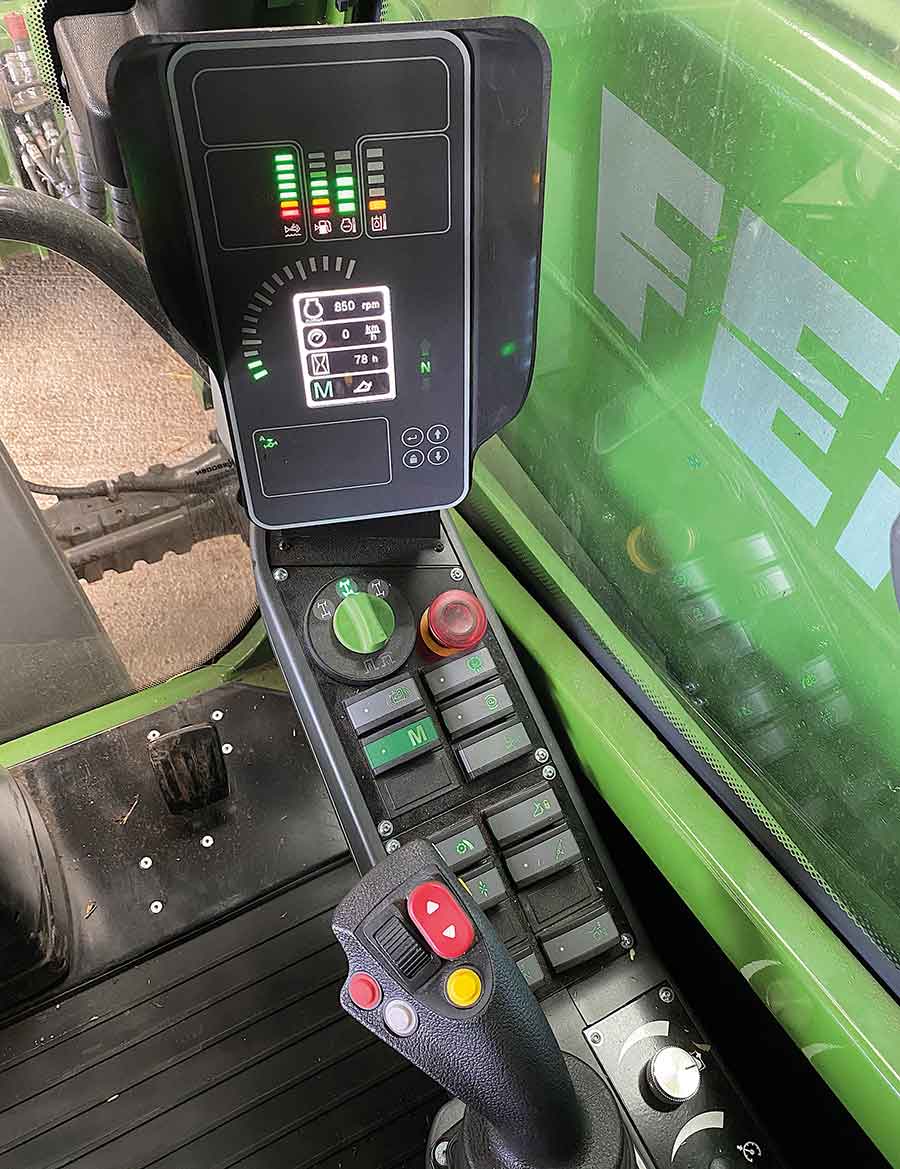 Most of Sennebogen’s telehandlers clock over 3,000 hours/year at industrial sites, so the lifting components are heavily engineered and designed to withstand the occasional missed service interval.

The huge boom swan neck and surrounding framework make the standard Dana Spicer axles look miniature and offer lifting stats to compete with anything on the market.

However, the size and geometry of the steelwork inevitably make things awkward when it comes to stacking bales in old farm barns and we found it impossible to put up the top layer without clouting a roof girder.

The boom is also plastered in a messy arrangement of uncovered hoses and junction boxes that should really be routed more tidily.

Big lifting stats continue in the hydraulic department, where the 200 litres/min pump matches the best of the competition. Although boom lifting isn’t as quick as an equivalent JCB, the 100-litres/min third service oil flow is generous and tear-out force is just short of some of the big loading shovels.

To handle all this heavy work, a steel channel braces the boom in its lowered position and prevents any sideways movement. Similarly, all of the lifting components are mounted dead centre, avoiding torsional forces that can take their toll on rams and pivots.

Load sensing on the rear axle will lock the boom if it nudges over the lifting limit, but an override switch in the cab gives 20secs of full boom movement.

Headstock options include JCB, Volvo, Manitou and Kramer, with hydraulic attachment latching and a pressure release for the third service standard on all. There is a vast list of extras, too, including boom suspension at £2,620.

Success in the telehandler market is no foregone conclusion and Fendt has its work cut out to avoid the fate that has befallen many of its tractor-making rivals.

The job has been made all the harder given it is entering a particularly niche sector with a product that is considerably more expensive than the competition and won’t appeal to many of its regular customers.

Though there’s the basis of a good machine – top-drawer cab suspension, decent joystick and seemingly bombproof lifting gear – the cab needs extensive work to bring it up to Fendt standard.

Whether or not the company makes the changes depends solely on how many of these early T955 machines it can shift.