Launched a couple of years ago, JCB’s TM420 was the biggest pivot-steer telehandler the company had ever built, offering a 4t lift capacity and more than 5.4m vertical reach.

But it lacked a certain something – power. Though the top-end telescopic TM was designed to offer loading shovel customers a potentially more versatile alternative to conventional clamp climbers, it didn’t have the muscle to match. 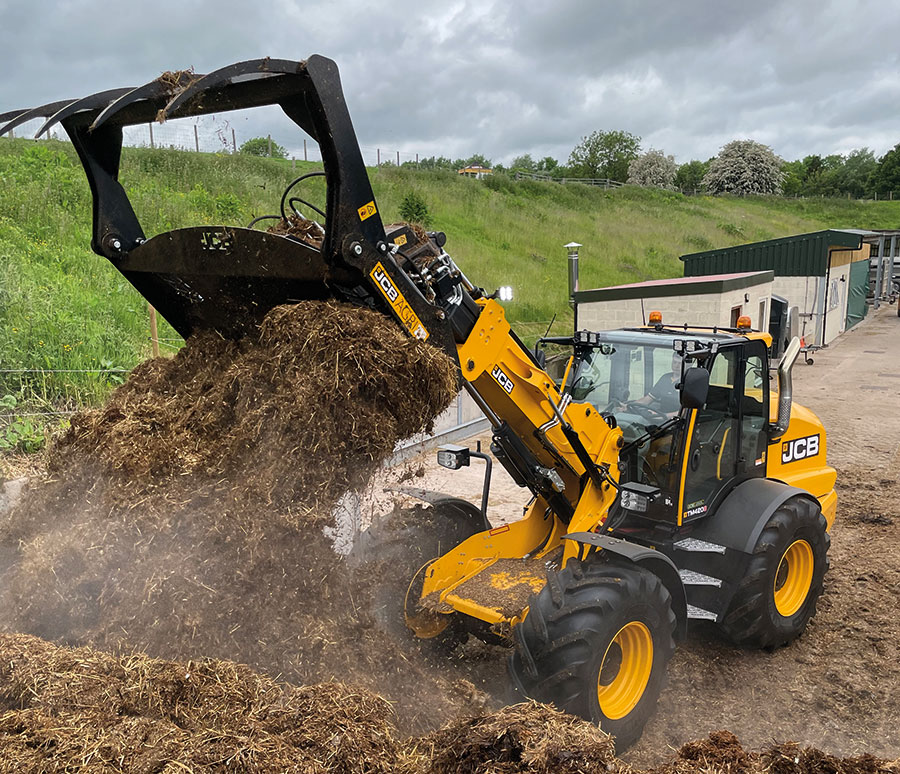 The TM420S gets a pair of hydraulic pumps to deliver maximum oil flow at just 1,700rpm © Nick Fone

Its 145hp motor was the same unit planted in its smaller, lighter sibling – the TM320S. At 1.7t heavier, the 420 was comparatively underequipped in the power department and, for salesmen making the argument for the 420 as a shovel substitute, it couldn’t compete in the power-to-weight stakes.

But now that’s all set to change with a new S-branded TM420, which has been given a 28hp power upgrade that takes it to the all-important 17hp/t mark. This, says JCB, is the optimum balance point for any machine destined for clamp consolidation.

On top of that, it has gained a twin-pump hydraulic system that generates maximum output at just 1,700rpm and a whole host of other goodies (more on them later). 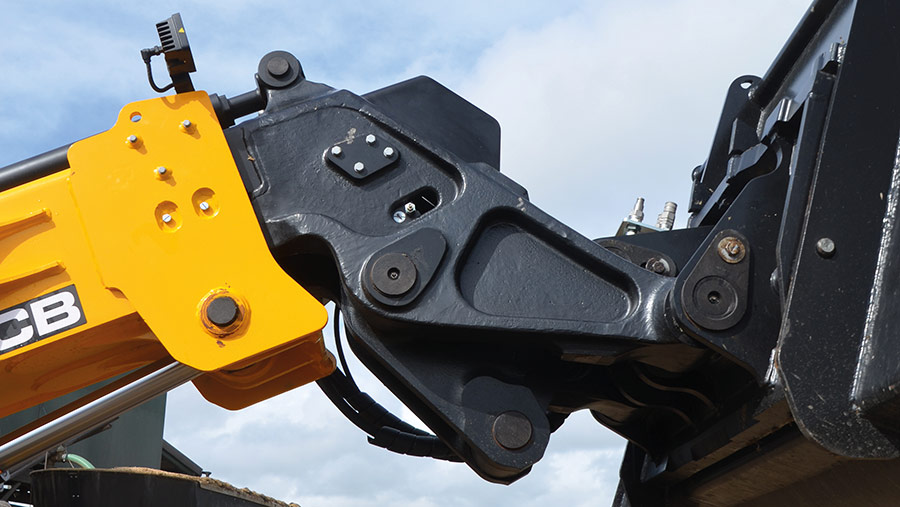 S-designated versions of JCB’s loading shovels and pivot-steer handlers have been a long-standing feature in the company’s line-up. But what that special tag actually means has varied over time.

Generally, these sporty variants had more power and extra hydraulic output compared with standard models, making them appealing for demanding jobs such as buckraking and muck-moving.

With this extra grunt also came extra spec – things such as worklights, mirrors and ultra-comfy armchairs – and JCB’s TM420S is no different.

There is a new transmission for the entire TM range, too. It still employs a torque converter to provide the cushion between the motor and running gear, but the powershift gearbox now has an additional two cogs, making for eight forwards and four in reverse.

On S-spec machines it’s possible to lock out the torque converter in all gears, whereas standard models get this facility solely in the top four steps. This feature is said to make for a more mechanically efficient drive to the axles, aiding in power-hungry tasks such as clamping and trailer towing.

We took the flagship TM to a Dorset dairy, where the resident TM320S clocks an average of 2,400 hours/year.

The first obvious difference when the 420S is parked alongside its smaller sibling is how much bulkier it is – it stands just shy of half a foot taller and 70cm longer. But interestingly, despite having wider, taller tyres, it hasn’t gained any width thanks to beefier axles running on narrower tracks.

That provided a pleasant surprise when it came to negotiating the narrow gateways and passages at our test farm. Possibly because the seating position is higher and views are better, the larger machine doesn’t feel any less nimble. But feeling is one thing and doing is quite another – spin the 420 round on concrete and you quickly realise that its turning circle can’t match the 320S, the diameter being some 2m bigger. 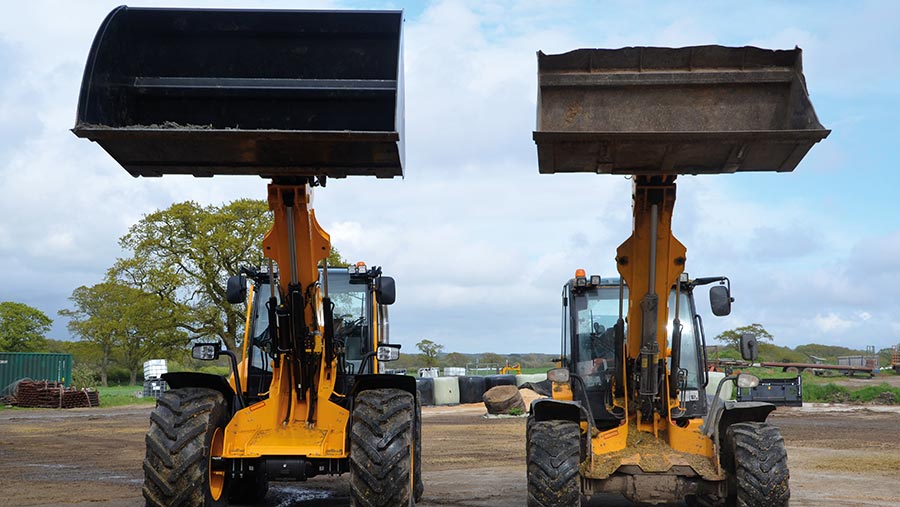 And there is another downside to those big boots. Their width means they almost close off any gap between the rims and chassis, limiting views to the attachment carriage when it’s down on the deck.

Aside from this, visibility along the chunkier boom is good, made even better when it is raised right up thanks to a larger rooftop screen and narrower roof bars. It might seem like a minor point, but we particularly appreciated the pull-down visor that has accompanied this change. Running on rails down either side, the mesh lower panel and solid upper section mean blinding low sun is no longer an issue.

One of the stand-out changes to this latest generation of bend-in-the-middle telescopics is the new eight-speed transmission.

Although it uses the same basic engineering architecture as the six-speed box it replaces, much has changed. Not only are there an additional two gears, but the torque converter has had a bit of a rework, too. This has all been necessitated by the ramp up in engine power and torque – without a transmission upgrade the extra ponies would have been likely to cause trauma somewhere down the driveline. 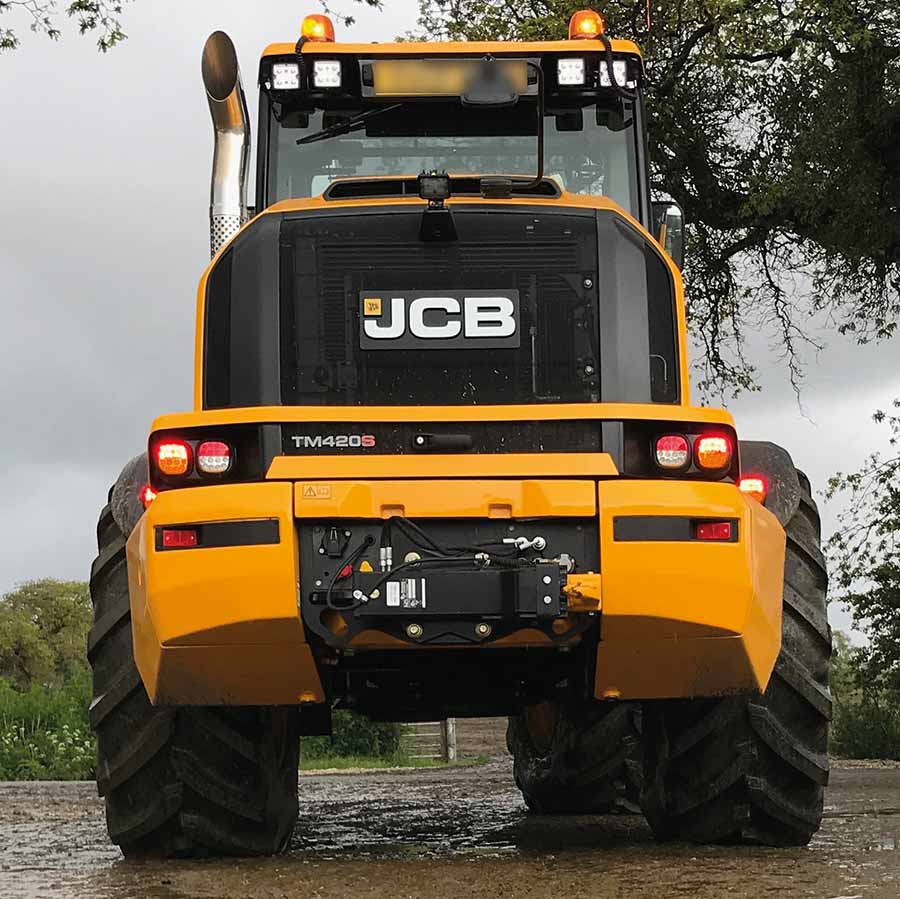 There’s plenty of meat around the backend, making the TM420S stable with heavy loads lofted high. Despite this it’s also remarkably smooth on the road © Nick Fone

And the software that glues it together has become smarter. It will detect the urgency of an operator’s driving style, altering shift points according to how big a dose of right boot it receives. So, much like the auto boxes in modern cars, push the machine hard and the computer will delay upshifts until higher in the rev range. More gentle treatment of the throttle pedal sees the transmission shift earlier, providing a more sedate approach to life.

From a driver’s point of view, no matter whether you operate it in auto mode or prompt up- and down-shifts with the joystick buttons, it’s a whole heap smoother than before. Those extra two gears also provide a much better chance of being in the right ratio at the right time. And, in combination with the 28hp output rise, make it much better at towing, where it will comfortably outclimb its smaller stablemate on any sort of incline. 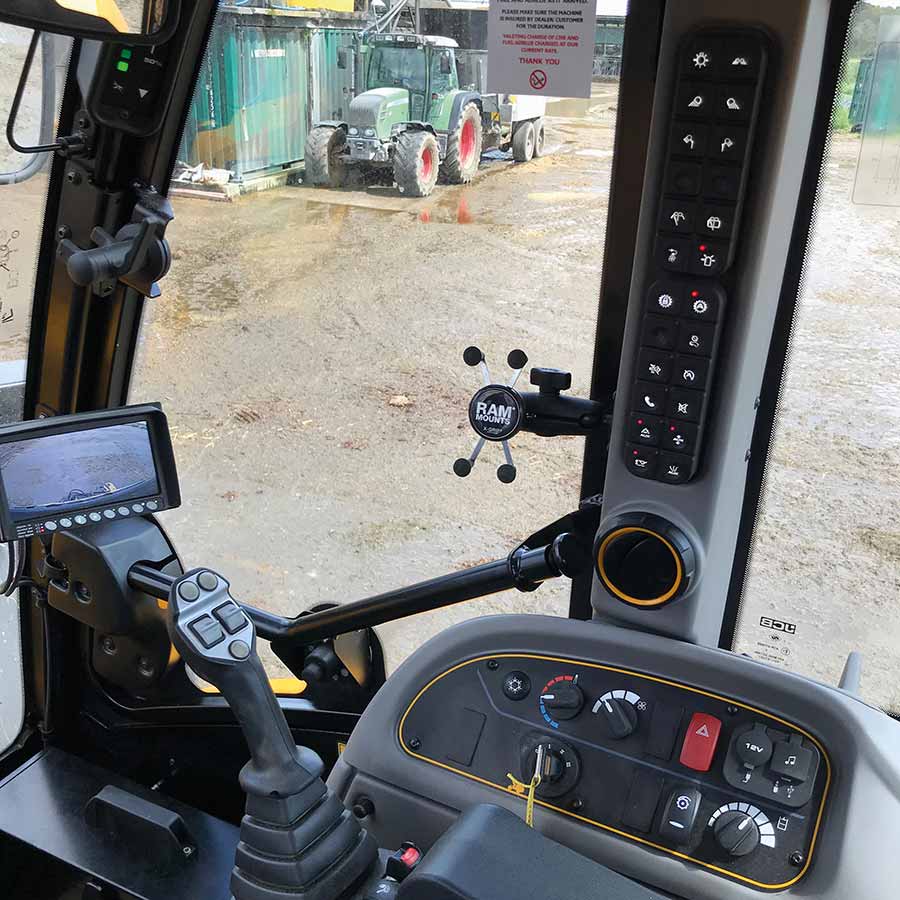 Blister buttons deal with all the main electronic functions, a number of which can be simply assigned to a hot-key on the main joystick. A reverse view camera is standard © Nick Fone

While on roadwork, it’s also worth noting a couple of changes to the braking system. As before, there are proper oil-immersed discs in each axle, but these are now supplied by separate independent circuits, so in the event of a failure the operator is not just left yanking on the handbrake as a last-ditch attempt to come to a halt.

That’s handy because it is no longer an option, anyway. Gone is the traditional ribbed rubber phallus protruding out of the floor to the left of the seat, replaced by a pto-style rocker switch on the armrest that activates the handbrake.

As a spring-on, hydraulic-off setup, it still requires disengaging to set the machine rolling and then re-engaging upon reaching a standstill – unlike the fully automatic on/off systems used by other manufacturers. We’re told the move to an electronic approach means an automated handbrake is now a distinct possibility for future JCB machines.

Hydraulics Twin variable-displacement pumps to achieve the same max oil-flow as before (160 litres/min) but at lower engine revs (1,700rpm).

Unique to the range-topping TM420S is its brace of variable-displacement hydraulic pumps, rather than the single unit employed in all the other models in the line-up. Logically, you would expect that to mean more oil flow, but JCB’s designers have opted for a conservative approach.

Oil rushes through the 420S’s pipework at the same pace as both the standard 420 and smaller 320S. However, unlike those two single-pumped machines, which require the engine to run at full chat to get maximum hydraulic output, the top-spec TM manages it at a calmer 1,700rpm.

The result? Everything feels far more relaxed and drivers no longer have to wrestle with the anchors while stamping on the throttle to get the boom to lift. Instead, the motor hums away steadily and gentle movements of the joystick see all the functions happening at once without a struggle, which is much kinder on the machine.

There have also been extensive changes in the cab, where the banks of rocker switches are now gone. Instead, there are two panels of rubberised blister buttons on the B-pillar, which are identical to those used in Fastracs and larger shovels.

This has enabled JCB’s engineers to add a level of tractor-style sophistication to the TM. The joystick button used previously to activate constant pumping for the third service has now become a programmable “hot key”, enabling operators to assign a range of functions to it, including switching between auto and manual transmission modes, activating torque lock, turning on the work lights and even answering the phone. Although this might sound like a bit of a gimmick, the good news is that it’s really simple to programme. 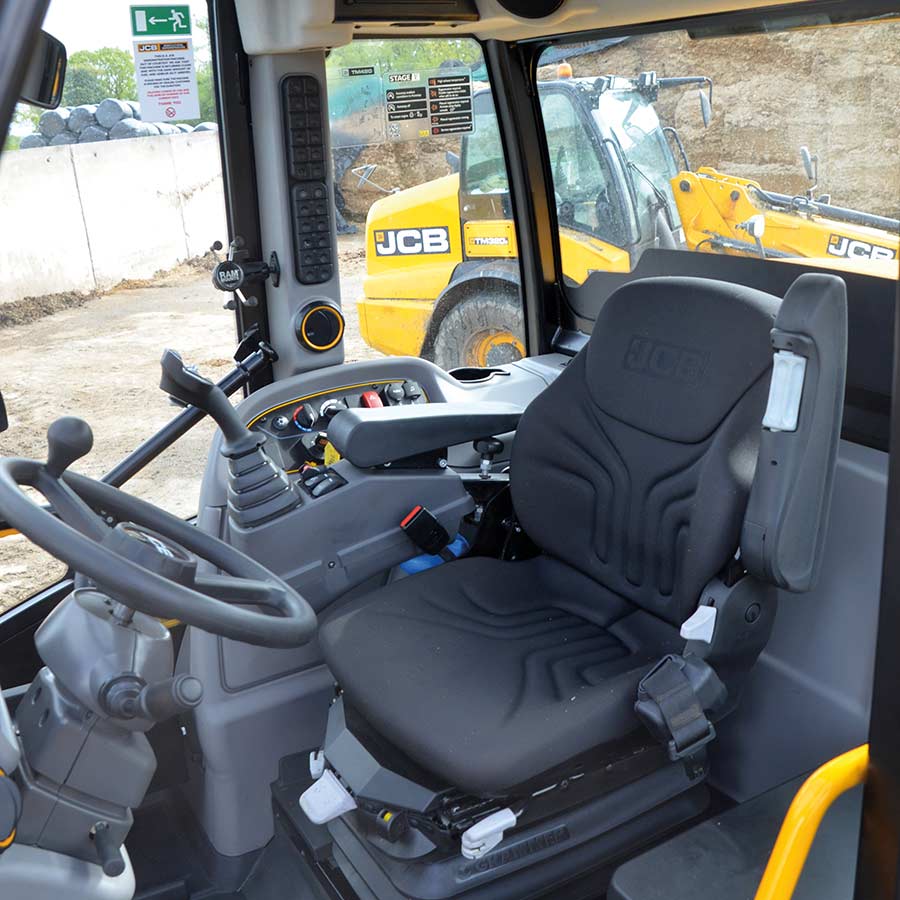 Despite having the same dimensions as before, the cab feels roomier thanks to uncluttered switchgear grouped on the right hand B-pillar © Nick Fone

The various auto functions for the work lights have also been carefully designed with obvious input from someone that has spent a good deal of time in the seat of a loader. The brace of boom-mounted LED spots are triggered as the bucket raises and knock out again as it drops below the operator’s eyeline to avoid reflective glare off the back of the attachment.

There is also the option to have two forward-facing lamps set to accompany the main beam headlights. A pair of rearward work lights are triggered to come on when reverse is selected, as is the dedicated tow-hitch LED that remains illuminated for a period to allow any pipes and trailer lights to be connected.

In a similar vein, there’s a “follow-me-home” function that delays work light shutdown to give the driver time to lock up and fumble for the truck keys before heading for dinner. 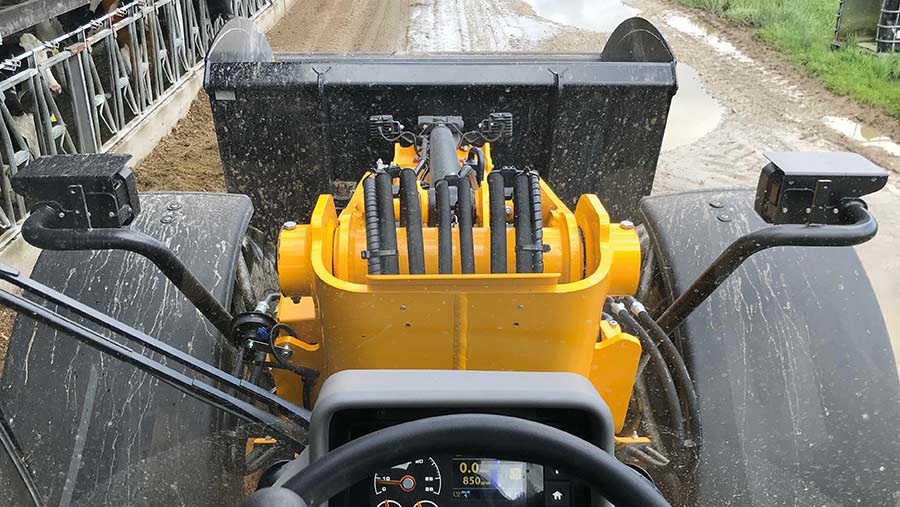 There is plenty of forward-facing glazing, but views down to the attachment carriage are limited by the 420’s large boots © Nick Fone

Having run the TM420S for a week, we reckon it represents a big step up in the materials-handling game. More power and greater lift capacity clearly offer the potential to get more tonnes shifted in a shorter period of time.

While the twin-pump hydraulic setup might not offer any extra output, the fact that it dishes out maximum flow at far lower revs makes for a much smoother driving experience, and could offer some significant fuel savings, too.

But while there are plenty of advantages in the extra automated functions, this latest refresh could probably have gone further – in particular, with improvements to the long-serving wand-like joystick.

Though it is uncomplicated and familiar, and the delivers good feedback through the low-pressure oil-over-oil pilot controls, it’s starting to be left behind by the multifunction handgrips offered by Manitou and Claas, and fell short in offering some sort of armrest adjustment to cater for operators of different shapes and statures.

Sticking with the cab, although the air-con/heating system has had an upgrade to make it more effective, drivers will be frustrated by having to constantly tweak the controls to maintain a steady temperature – could thermostat-regulated climate control be an option for the future? We hope so.

Niggles aside, the overall conclusion is that the 420S is, at last, a worthy shovel alternative with a power-to-weight ratio to match. While it will undoubtedly offer extra capacity over the 320S, its extra bulk will no doubt limit just where it can be put to work.