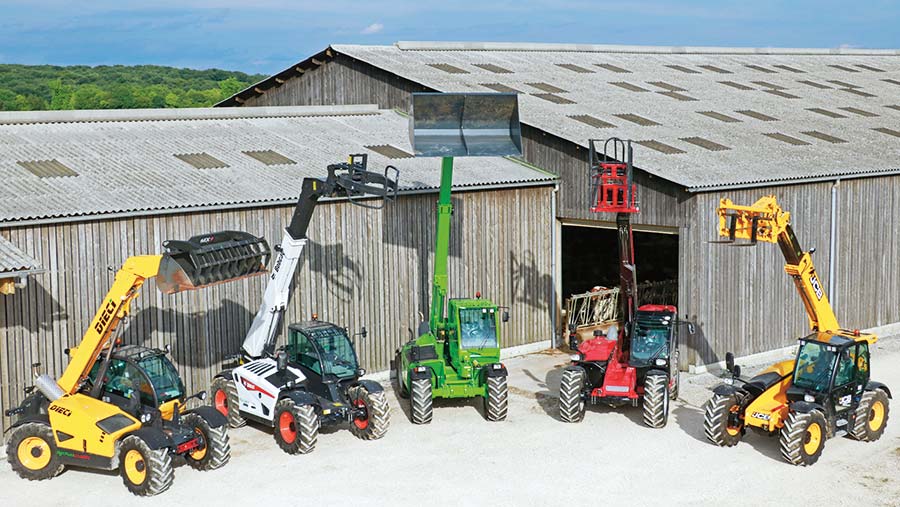 This winter’s big machinery test is all about lifting and shifting as we thrash out the winners and losers in the rigid-framed telehandler market.

Although a little thinner in participants than the tractor market, there are still 12 manufacturers jostling for sales in the sought-after 4t lift, 7m reach sector.

Our motley crew of five contenders has a distinctly European flavour, with Dieci and Merlo representing Italy, a brace of French machines in the form of Bobcat and Manitou, as well as JCB flying the flag for the Brits.

That selection includes four of the five biggest sellers in the UK.

The notable exception is Claas, which at the time of the test found itself in no man’s land as it swapped supplier from Kramer to Lierberr (before launching the new Scorpions at Agritechnica in November).

Other machines available in the UK include New Holland’s modest range of seven handlers – along with the Case-IH equivalents – Massey Ferguson, which is based on the Bobcat, lesser-known Faresin from Italy, as well as Deutz-Fahr and construction specialist Caterpillar.

Read the five tests in the box, and details on how we did the test below and check out the specs guide at the end of this article or you can download the PDF.

Read all of the tests

They were assembled with the help of our colleagues from France, Germany and the Netherlands at a busy dairy farm near Besancon, on the French border.

They were then subjected to a two-week trial during the summer that took in bale handling, muck heap work and a few extra trials to compare things such as fuel efficiency and lifting power.

We were also able to consider the vastly different levels of spec, from the bare bones interior of the Bobcat to Manitou’s New Ag range, which carries perks such as automatic bucket shaking and a return-to-position headstock ¬controlled through a whizzy in-cab screen.

Improved spec goes some way to justifying list prices that have drifted north of the £90,000 mark in the case of the JCB – a figure that will probably come as a bit of a shock to those who don’t frequently dabble in the telehandler market.

Not long ago, machines of this size would have been considered very high capacity, but buyers must now consider the impact of the boring-sounding role of EN15000 legislation, which has forced manufacturers to fit cut-out systems that engage when the loader nears its overload limit.

It’s important for safety reasons, but restricting hydraulic functions when lifting heavy loads means buyers won’t get away with running a modestly-sized machine and pushing it to its limits.