Manitou had a big shake-up of its telehandler ranges last year, adding a new cab and a handful of different transmission options.

There’s a four-speed Powershuttle torque converter set-up, six-speed Powershift Plus that contains an auto-shifting mode, two-range M-Varioshift hydrostatic as well as the ZF-built single-range hydro that featured in our test. 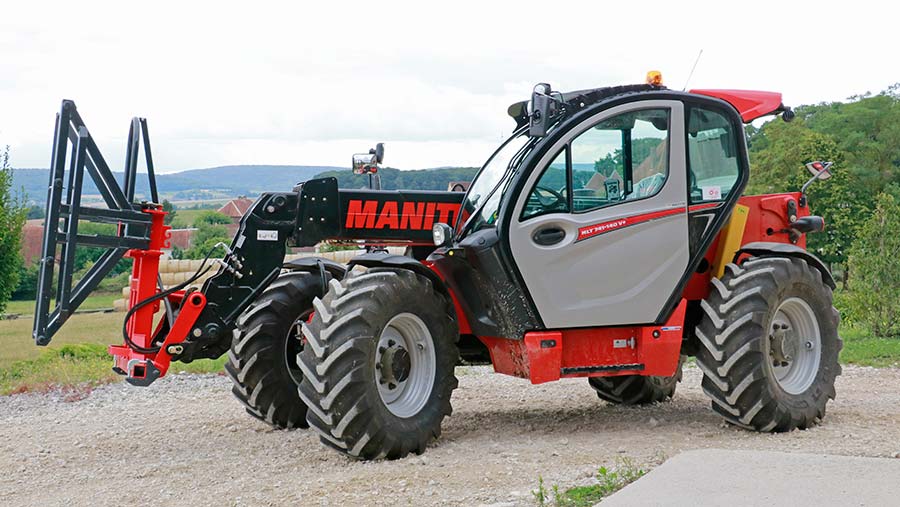 The smallest in the range is badged the MLT 630-105 – 6m lift and 3t capacity – and has the same 3.6-litre engine as the version in our test, albeit tuned to 101hp, and a slightly smaller hydraulic capacity of 104 litres/min.

Manitou has long had to play second fiddle to JCB in the UK, but it is working hard to narrow the gap.

Its latest machines push the boundaries of telehandler technology, bringing a fancy monitor and lots of features never seen before on farm loaders.

While functions such as bucket shaking are useful, it’s unlikely that the average operator will really make the most of all the equipment they are paying for.

Its performance on the muck heap was a sour point and drivers will get sick of the constant bleeping and hydraulic lock-up caused by the load restrictor, particularly if you compare it to the brawn of the JCB.

The company didn’t want to provide us with an official list price, but after a bit of sniffing around we found one for £86,176.

Manitou’s recent telehandler overhaul plays out most obviously in the cab, where buyers get the sort of controls you might expect in a decent-spec 150hp tractor.

Let’s start with the climb in, where the MLT takes top prize for its single step, neat grab handles and a triangular cut-out in the cab floor that makes it easy even for those nursing stiff backs and dodgy knees. 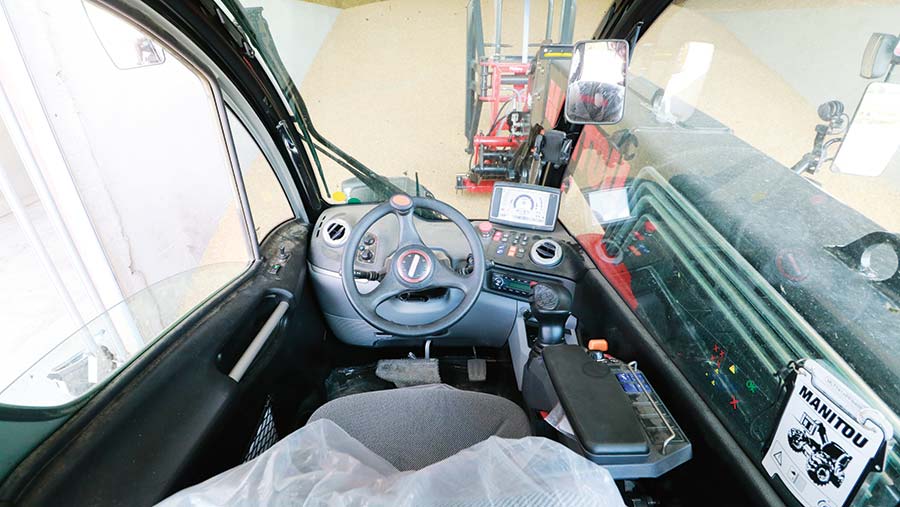 The door itself is a single-frame set-up with an electric window that is similar in style to the Dieci.

That means it’s big, heavy and a pain to open from the inside – there is no doubt that JCB’s two-piecer is better for frequent disembarking.

Views to the wheels are sub-average too, not helped by a bulgy bonnet and low seat position.

However, the swooping one-piece windscreen offers an unrivalled look at the headstock through its lifting arc and the roof protection provided by cleverly angled slices of steel is as unobtrusive as it gets. 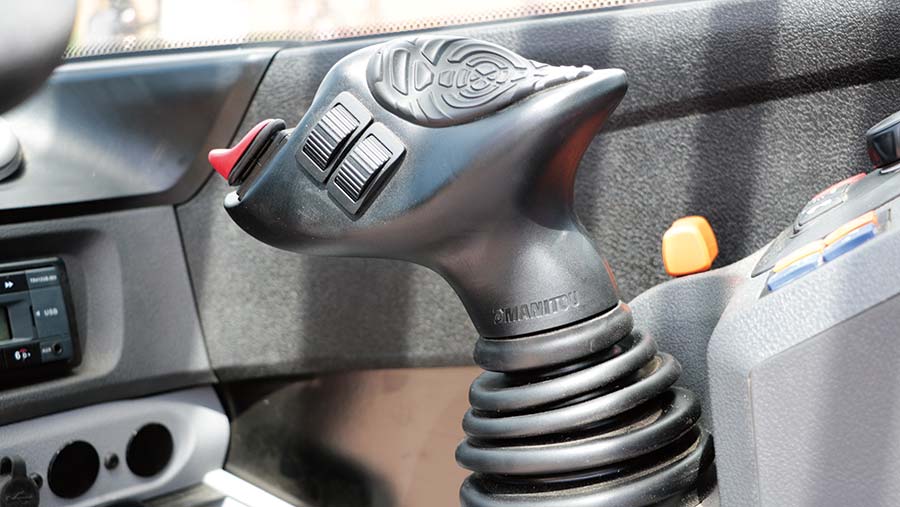 The seat armrest carries a good chunk of the buttons and the snail-shell-like JSM 2 joystick with index-finger operation of the F/R shuttle.

It is a comfortable arrangement – albeit quite different to most of its rivals – as the driver’s hand lies over the joystick like a computer mouse, leaving the thumb free to work the boom and third service rollers.

For real keenos, it’s also possible to swap the blister buttons around so that the ones used more frequently are easiest to reach.

The high-res screen is swishy by telehandler standards and is not as hard to navigate as it first seems.

That is helped by the way functions pop up as the associated button or dial is moved, displaying alterations or explaining why it’s bleeping f­uriously at you.

Manitou has traditionally flitted between engine suppliers, but now seems to have settled with Deutz for its mid-sized machines.

The 3.6-litre, four-pot motor provides 136hp and has a system that perks up engine revs from 870rpm on tick-over to 1,020rpm as the hydraulics are used. 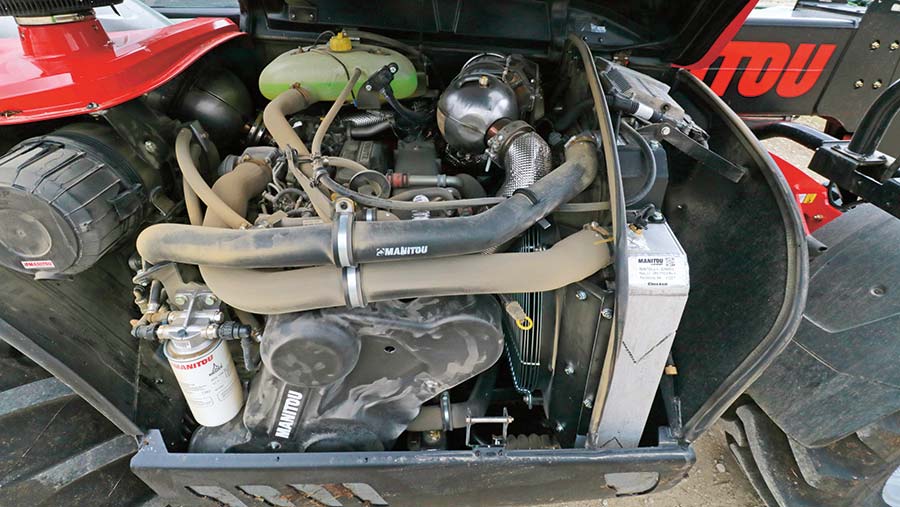 Those tractor-like qualities mentioned earlier include a hand throttle and speed limiter that allow the two to be controlled separately for steady jobs such as passage feeding or bucket brushing. 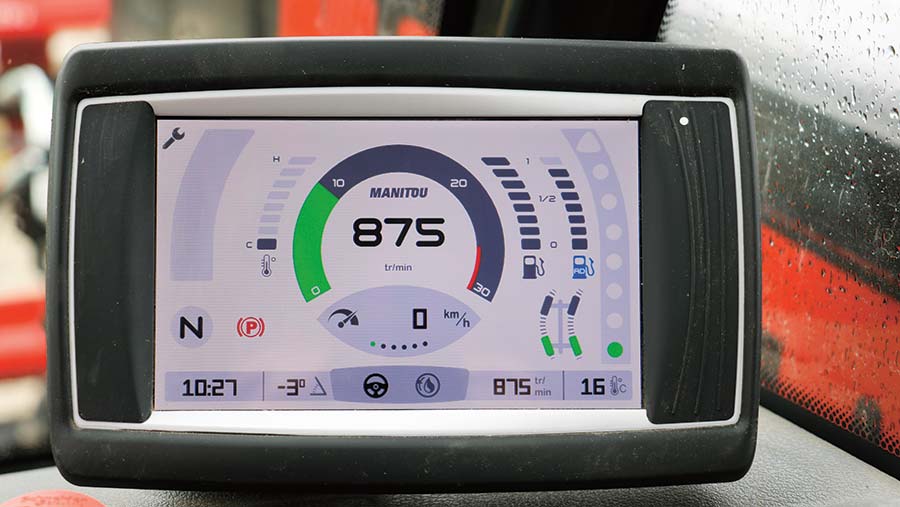 Manitou’s single-range stepless gearbox is supplied by ZF and uses a hydraulic pump to drive a pair of radial motors at low speeds to provide maximum torque, but kills one of them at speeds over 20kph to save on fuel.

That means there is no swash plate like you would see in other machines, which the company says requires more flow oil to produce the same torque.

The gearbox was the silkiest of the lot on the road and responded quickly to the hilly sections of the test route. However, it got the wooden spoon for its turning circle.

Like JCB, the company opts for regenerative hydraulics that see the boom drop by gravity, rather than being pushed by the hydraulic circuit. It’s a good way of doing things as it saves oil power for operating other functions at the same time.

However, the MLT recorded some pretty dismal cycle times – it was the second slowest at low revs and bottom of the pile with the engine at full chat.

In heavy muck, we also found the EN15000 limiter was more restrictive than the rest, so we had to employ the dashboard override button quite often. 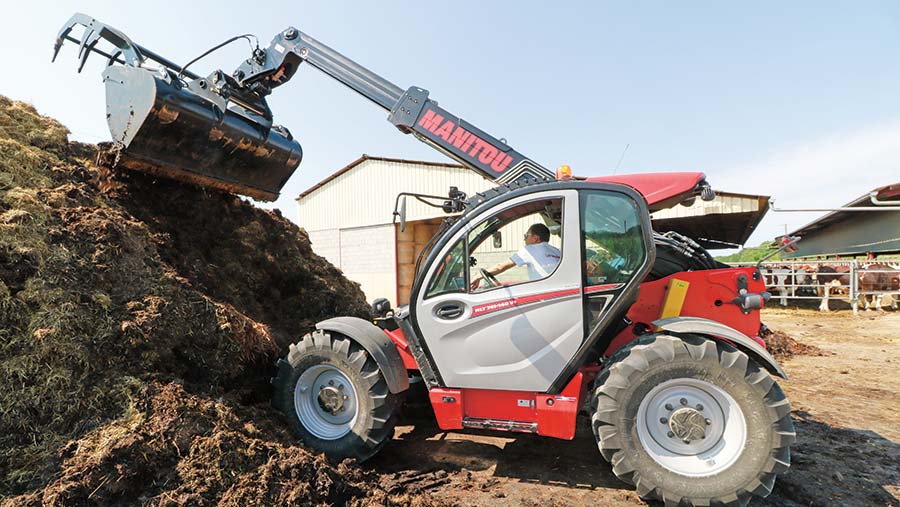 Automatic modes include Quick Lift, which extends the boom while lifting to keep the headstock moving vertically, bucket shake and a return-to-position system.

This uses sensors to memorise the bucket’s position, but it wasn’t very accurate.

We set it to the shed floor, but after three cycles it had drifted enough to be off of the ground.