JCB might be top dog in the telehandler world these days, but in the 1990s it couldn’t get a look in.

Back then rival UK firm Matbro was king, and with both its pivot-steers and rigid telescopic machines selling like hot cakes, it had about half the UK market to itself.

It wasn’t to last, though – by the end of the decade the wheels had come completely off the wagon and production stopped for good.

See What happened to Matbro?

But the boom years left behind a huge legacy of machines – the firm built more than 1,500 of its TR200 model alone – and, thanks to their solid construction, most of them are still going strong.

They are not without their foibles, though, and when the hours rack up or the maintenance has been wanting they will need some specialist attention. 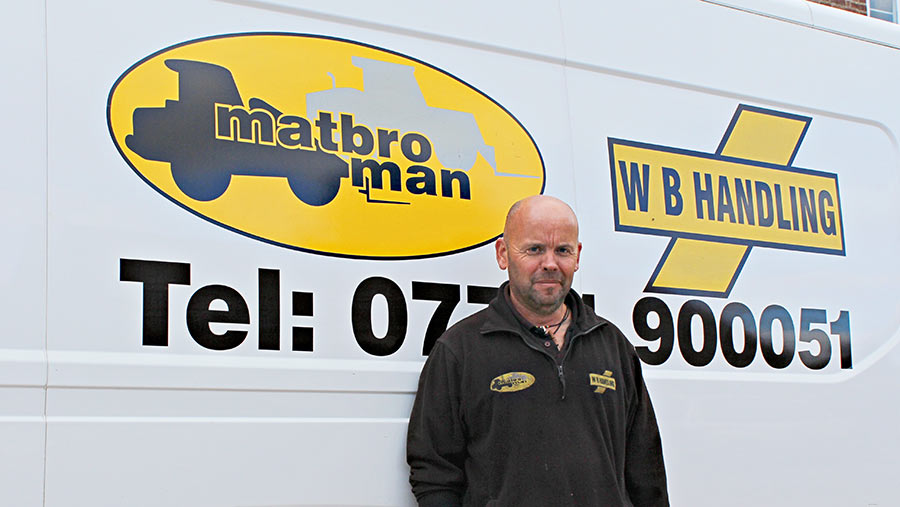 This is where Wayne Bowen, otherwise known as the Matbro Man, comes in. He has been spannering these British-built handlers for more than 20 years and knows how to cure almost all their ailments.

We paid a visit to his base in Craven Arms, Shropshire, to get the lowdown on a couple of the firm’s most popular models.

See also: The ultimate guide to buying a telehandler in 2018 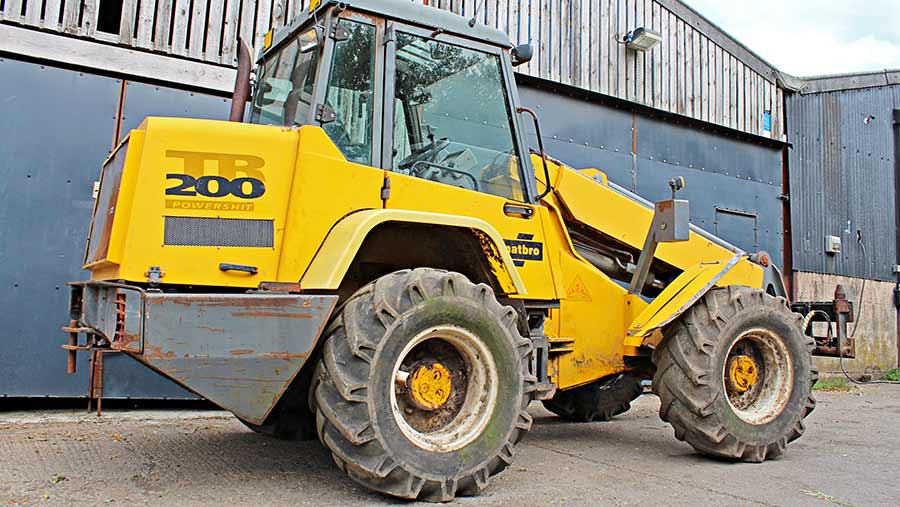 Build quality was particularly solid and they had enough creature comforts to stand up against much more modern equivalents.

As a result, prices hold firm and if one comes up for sale it’s usually snapped up instantly. Even the slightly jaded 1998 model we are focusing on in this issue is worth at least £10,000. *As a slight aside, top marks to the owner for the modified transmission decal…

What to watch out for… 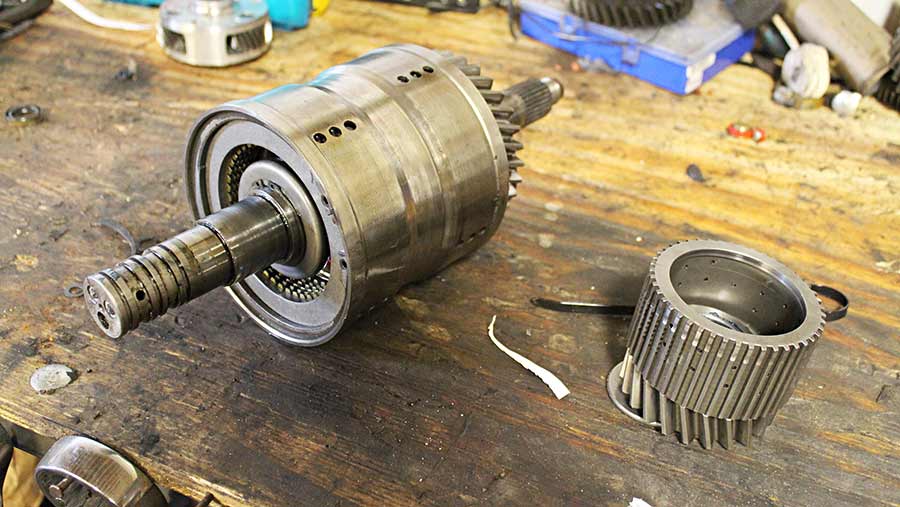 Many Matbros from the 1990s (including the TR200 pictured) come with the JCB-owned ITL gearbox. This is reliable enough if it gets a regular oil change with the correct fluid (code 9330), but its main nemesis is the oil cooler.

When this fails, it allows water into the box, wreaking havoc with the plastic pistons in the clutch packs.

Telltale signs that it has gone are a dropping water level and white froth around the water filler cap. If the transmission oil is dipped, it will also have the colour and consistency of strawberry milkshake.

If it’s caught early – or it’s a model with aluminium pistons in the clutch packs – then the owner could get away with fitting a new oil cooler, flushing out the transmission with SAE10 oil and refilling.

However, all too often the problem is picked up when the plastic pistons have swelled, jamming it in gear. Then the transmission needs to be rebuilt, which involves lifting off the cab and removing the engine and gearbox as one unit. Then the stripping-down process begins.

Earlier powershuttle models contain just one clutch pack, while there are six in the later powershift versions. Mr Bowen refurbishes these units himself using aluminium pistons and new bearings and can usually refit them on site – if it all goes to plan, the job takes a couple of days.

For the simpler powershuttle box, prices start at about £1,500 for parts and £1,000 in labour. However, some badly damaged boxes will need to be re-bored and sleeved, which adds a bit more to the that figure. Powershift models will also be more expensive.

While we’re on the transmission, it’s worth noting that changing the oil is trickier than it sounds. This is because the drain plug is tucked away on the right-hand side of the machine above the rear axle.

Like all well-used, bend-in-the-middle handlers, Matbros can develop serious slop in the main pivot point, particularly the bottom pin.

When this wears, it enlarges the hole and makes it an oval shape, meaning standard replacement pins are no good. To get around the problem, Mr Bowen gets larger button pins machined by a local engineering firm, which have a boss at the bottom that he welds in place.

About one in 10 top pins will need replacing, too, but for those that still have life left in them, he adjusts them using shims to give just the right amount of float. Apparently this often wasn’t done correctly in the factory, so repinned machines can be tighter than they were when new.

To do the job, he splits the machine on a pair of heavy-duty trolley jacks and he can usually turn it around in a day. Prices start at about £800. 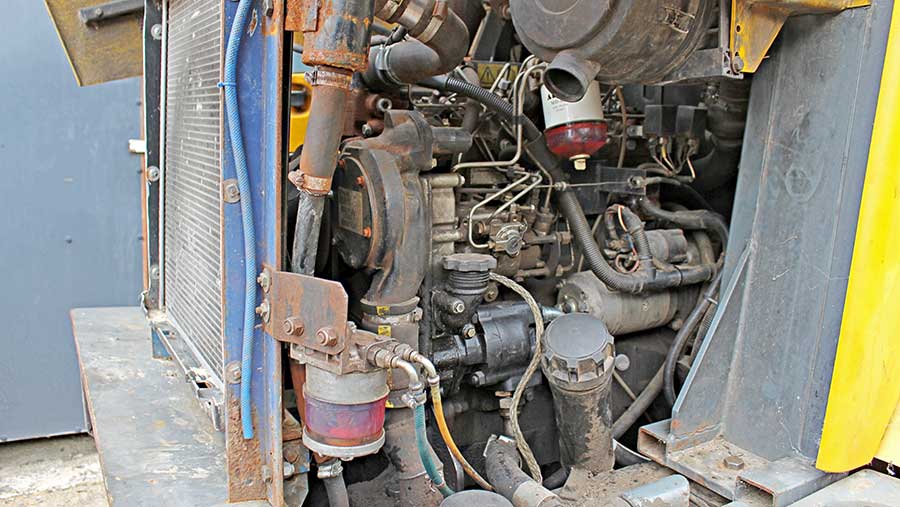 The four-cylinder Perkins 1004 Phaser engine was fitted in most Matbros of this era and it stands the test of time pretty well.

However, well-worked or abused machines will eventually require new pistons and liners. This involves removing the engine and gearbox and lifting the head, but after that it’s a fairly straightforward job. Prices start at £600 for parts and £1,000 labour.

According to Mr Bowen, the rest rarely needs to be touched and the bottom end is “bombproof”.

At some point the radiator will also probably need attention, as the cores in the original Matbro units were poor. The rest of the rad is fine, though, meaning it’s often better to get the core replaced than to try to fit a cheaper aftermarket unit.

The one botched on to the machine pictured isn’t really big enough for the job. 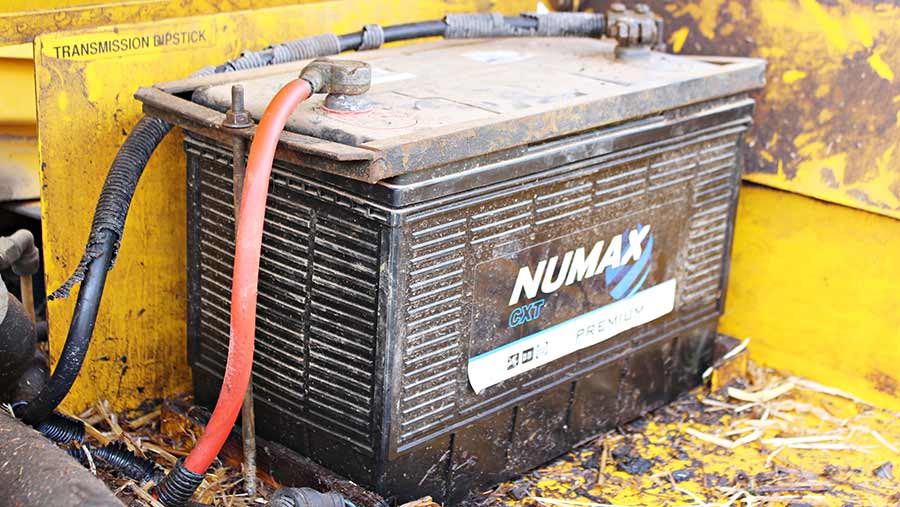 For the Perkins engine to fire properly on a cold morning it needs to have the correct 642 battery, which is rated to 1,000 cold cranking amps (CCA). 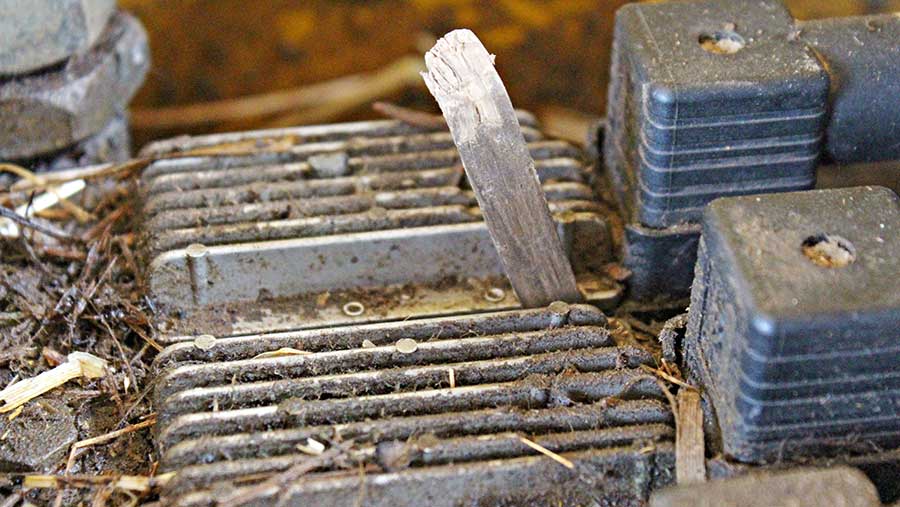 If the boom stops lifting, then it’s usually down to one of the solenoids in the Danfoss hydraulic block losing its connection.

When the offending unit has been pinpointed, wedging a small piece of wood in the block to tighten up the connection usually solves the problem.

If it doesn’t, a new solenoid should do the trick. They cost about £385 each. 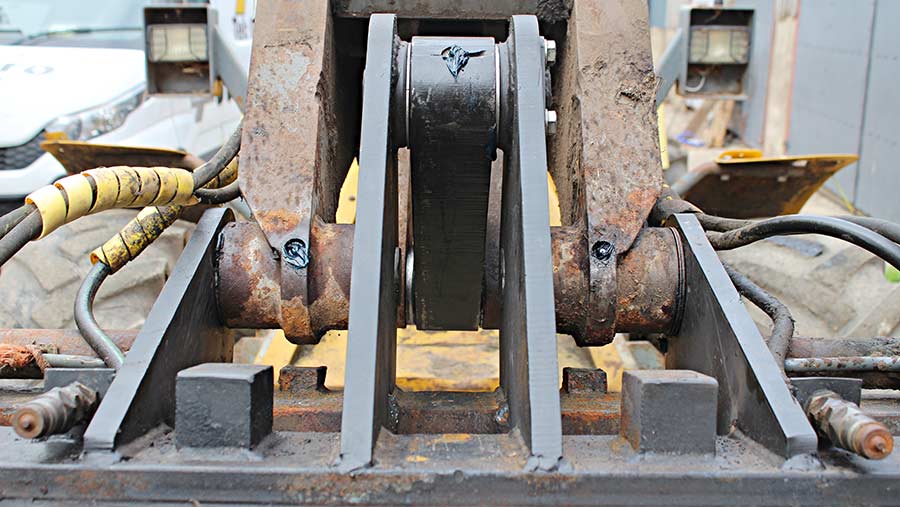 Carriages are clearly a major wear point, so Mr Bowen offers a service to recondition them. This includes welding in new flitches, adding a new compensation link – otherwise known as the dog bone – and replacing the original fibre bushes with phosphor-bronze versions that last a lot longer.

If there’s excessive wear in the carriers, larger bushes can be fitted to take up the slack. Generally, a carriage refurb costs about £1,000 and he offers an exchange service to speed the job up.

At some point in their life, most machines will suffer sluggish hydraulic performance, which would typically signal that the pump is on its way out. However, the culprit is almost always the inlet section on the spool block.

These cost about £295 and it’s worth investigating before forking out for a new pump. 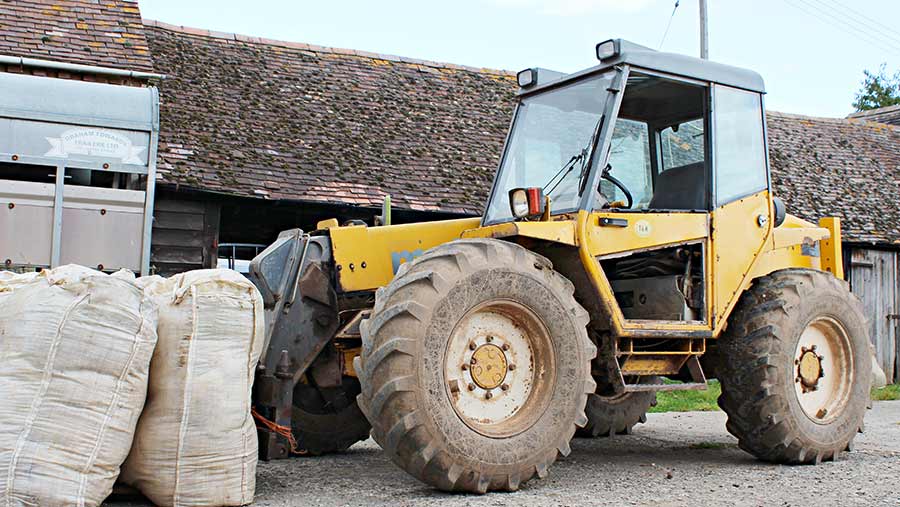 Pivot-steers might be the core machines for Matbro fans, but there are still a large number of rigid machines in operation across the country.

The transmission, engine, hydraulics, carriage and much of the electrical system are the same as the TR200 pivot-steer, but there are a couple of additional items to watch out for. Prices for these machines can still reach well over £10,000 and the 1994 model pictured is worth about £8,000.

What to watch out for…

If they don’t get a regular dose of grease, the kingpins on the 270’s and 280’s Carraro axles will eventually give out.

If left long enough, the swivels will also wear to the point that they break through the casting. This might sound terminal, but the axle can be machined and fitted with new swivel cups.

It’s a reasonably big job which involves removing the axle from the machine and stripping it down before sending it off to be machined. Prices start at about £500. If he has one in stock, Mr Bowen can offer an exchange service to speed the job up. The kingpins themselves cost about £30 to £40 each. 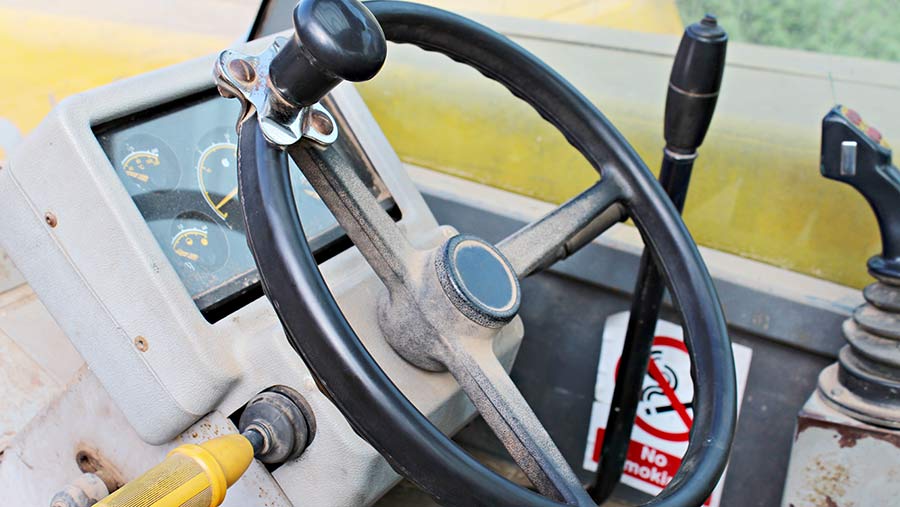 Stiff steering is a common complaint on the 270 and 280 and it’s usually caused by the needle bearings in the steering column seizing up.

If the steering wheel doesn’t spring back to centre when the engine is off, then this is definitely the problem.

A strip-down, clean and re-greasing of the steel rollers should get it back to working order.

A number of pivot-steer models have the same steering column, but they don’t seem to suffer as much as the rigid machines.

An abundance of spares 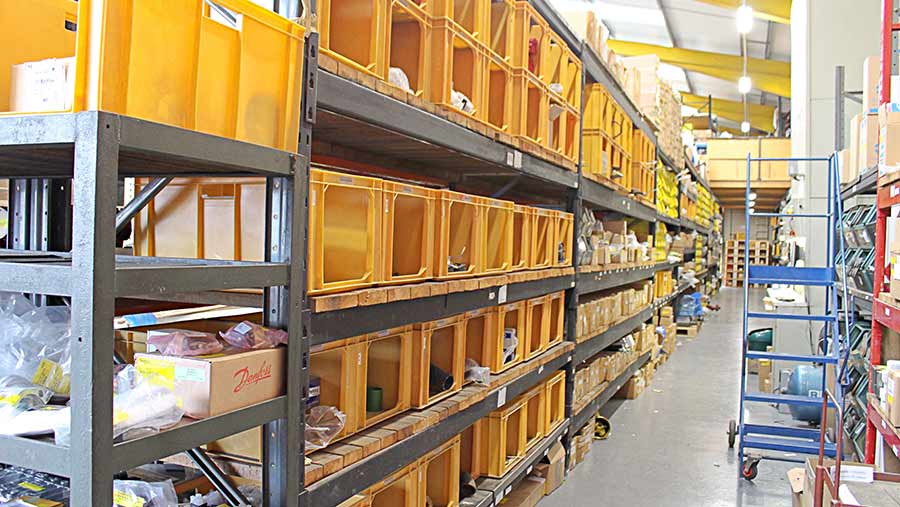 Thanks to the sheer number of Matbro machines still in regular operation there’s a buoyant parts industry there to prop them up.

HES Tractec is one of the biggest stockholders and has been selling spares for the machines since the late 1990s.

According to the firm, there are very few parts it doesn’t have, particularly for the handlers built in the late 1980s and 1990s, as well as Terex machines from the early 2000s.

As the Matbro was largely a kit of parts, many of these come from the original component manufacturers, such as Carraro, Dana Spicer, ZF and Sauer Danfoss.

But for more bespoke items, HES works with some of the engineering firms that supplied Matbro, commissioning new runs for some of the obscure bits.

The firm has even purchased the original moulds for the rubber bonnet surrounds on the TS270, TS280, TR200 and TR250-ITL.

It’s not just HES, though. Other specialist suppliers include Great Exportations, based opposite Matbro’s former factory in Tetbury, and Cambridgeshire-based DB and MP Barnard. Mecalac also holds some original Matbro and Terex stock.

Prices can vary considerably, so it’s worth shopping around.

Matbro enjoyed enviable success in the UK and Ireland, and when firm got into financial hot water in the late 1990s it had an impressive 50% of the telehandler market to itself.

But despite its buoyant sales, the crippling debts arising from some dubious accounting practices meant it couldn’t continue as it was.

Keen to capitalise on the situation, John Deere swept in – buying Matbro’s manufacturing rights, intellectual property and a few other bits it fancied for a sum of £7m.

It then set about building its own range of handlers in Germany, based loosely on Matbro’s designs, but using John Deere engines and a different mix of components.

That left Matbro’s parent company, Powerscreen, with two factories (in Tetbury, Gloucestershire, and Dungannon, Northern Ireland), a parts business and a still-considerable amount of debt. It struggled on for another year, before US firm Terex bought it out in 1999.

However, a clause in the John Deere contract that prevented the firm building telescopic machines until 2001 meant the first wave went out with rigid booms. There were rumours that some telescopic booms were slipping out of the door as an aftermarket fitment, though.

These early Terex machines had a good reputation and were essentially Matbro machines rebranded.

Unfortunately, the grand plans never quite developed and Terex closed the Tetbury factory and moved its operations to Coventry in 2001.

It continued building Matbro-style machines until the mid-2000s, but in a bid to cut costs these weren’t made to the same standards as the original machines.

Terex continued holding a small stock of spares, until it sold its UK operations to Mecalac in 2017. As a result, some spare parts are still available from Mecalac.