German telehandler specialist Weidemann has replaced its existing T6025 model with the T6027. This 6m lift machine is aimed at medium-to-large farms and biogas plants and is powered by a level III-B turbocharged engine with 75hp. 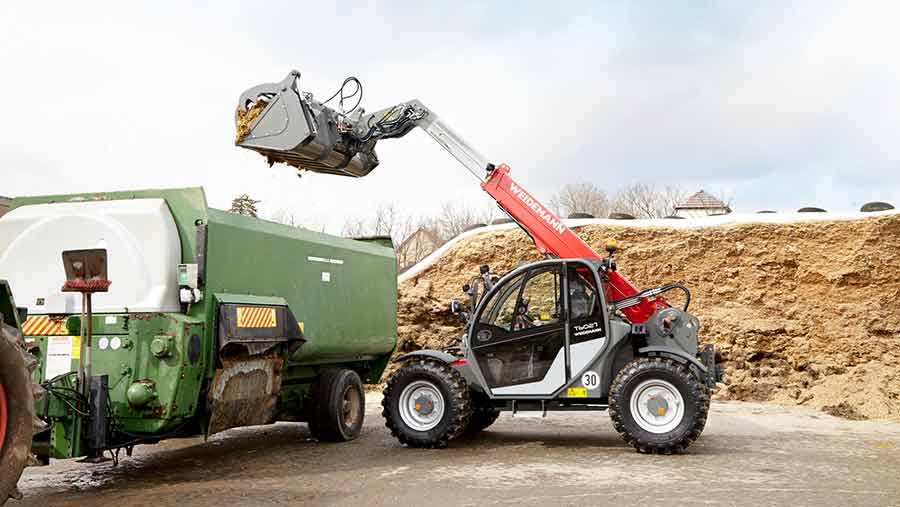 An electric joystick with load-dependent flow-sharing is said to give faster loading cycles since raise/lower and extend/retract tasks can be performed at the same time. There’s also a fresh auto-bucket-return system to make things more speedy when doing repetitive jobs such as stacking pallets or filling lorries.

There’s also a feature for coupling and uncoupling hydraulically operated attachments. The knob for the pressure release lever of the third control circuit is sited outside on the telescopic arm, so it is easy to get at. That means attachments can be changed more quickly, says the company, and works when the ignition is on or the engine is running.

Hydraulic flow rates can be adjusted manually on a jog-dial that you can rotate with your finger for continuous setting. You can also alter the quantity of oil coming in seamlessly.

A reversible fan is fitted to avoid overheating the engine and can be operated without dismount from the vehicle. Other options include three-point rear linkage, power take-off and a central lubrication system.