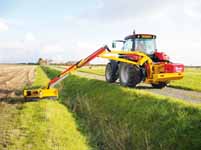 What’s the priority – reach out or reach up? That is one of the considerations for contractors planning to purchase a new sidearm flail mower.

While an automatic parallel action as the main arm is raised makes life easier when trimming hedges, it does usually limit upward reach thanks to the parallel linkage mechanism compared with an arm with free movement.

Not by much, judging by the figures shown in the accompanying table. But for some it may be a factor.

The machines listed are all designed for professional users and come with a telescopic second arm, which adds a little weight, additional components and a little extra service requirement but also a large helping of extra versatility.

For one thing, this feature gives a reach arm the additional stretch that may be needed to trim a hedge over a fence or ditch. But with the right arm configuration, it should still allow the cutterhead to be worked close in to the tractor down a narrow lane and tucked away for transport.

The Bomford Hawk, new Falcon Evo and Buzzard reach mowers with a telescopic section can have free-movement or parallel-action arm configurations, while all but the Noremat Magistra machines from Votex have parallel action as standard.

On selected free-movement Falcon Evo and Buzzard mowers an option can be added that positions the flail head further forward than the standard arrangement so that it can be seen more easily through the side window of a tractor cab.

The similar Midcut option is available on the newly revamped range of McConnel Power Arm reach mowers, while the Magistra Visiobra M61T has a permanently cranked forward arm for the same purpose.

The McConnel range now standardises on gear pump hydraulics – with the exception of the piston pump option on the PA8085TT with its two-section telescopic arm – because of the significant improvements made to this lower cost hydraulic power source.

It rates the two packages at 70hp and 85hp – as does Shelbourne Reynolds with regard to the two power choices available for its pair of telescopic Powerblade reach mowers.

Bear in mind when looking at power ratings here and on manufacturers’ literature that they give a poor indication of the power available at the flail head, which is where it counts. 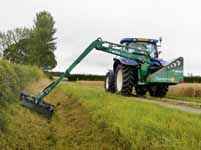 For one thing, a pump with a quoted output may be fitted but it may not be driven in a way that uses that potential to the full. The inherent power losses suffered by a hydraulic drive system will detract from the usable power available and the scale of those losses on a given machine is dependent on the manufacturer’s understanding of the intricacies of fluid dynamics.

Numerous options allow operators to customise their machines according to preferences and the type of vegetation control being tackled.

From different widths and styles of cutterhead with fixed or hydraulically-adjusted roller; different types of flail for hedge and grass cutting; alternative cutterheads, such as swipes and saw blades for tackling brush and mature growth; and both mechanical and electronic arm and head float control for verge mowing, contractors have plenty of add-ons to consider.

And all to help keep the countryside looking trim.

* In the table, the dimensions show the maximum reach and hedge topping height, both with the flail head horizontal. List prices include a base flail head.